The Story of the Declaration of Independence 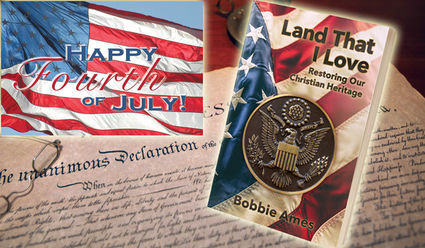 This story, written by Bobbie Ames, first appeared in the July 2012 issue of the Alabama Gazette and has been included in the author’s recent book, “Land That I Love: Restoring Our Christian Heritage.”

“The story of the Declaration is a part of the story of a national legacy, but to understand it, it is necessary to understand as well its makers, the world they lived in, the conditions which produced them, the confidence which encouraged them, the indignities which humiliated them, the obstacles which confronted them, the ingenuity which helped them, the faith which sustained them, the victory which came to them. It is, in other words, a part, a very signal part of a civilization and a period, from which, unlike his Britannic Majesty, it makes no claim to separation. On the contrary, unsurpassed as it is, it takes its rightful place in the literature of democracy. For its primacy, is a primacy which derives from the experience which evoked it. It is imperishable because that experience is remembered.”

We are quoting David C. Means, Assistant Librarian of the Library of Congress in the publication, “The Story of A Document,” Washington, 1950.

The Declaration was signed on August 2, 1776, and filed in the office of the Secretary of the Continental Congress at Philadelphia. The parchment was rolled up and rested undisturbed except when it was brought out to be signed by other delegates. When Congress, in order to avoid the British, was reconvened in Baltimore, the document was transported in a light wagon where it remained until safe to return to Philadelphia. It found temporary lodging in a number of locations, the courthouse at York, Pennsylvania, Annapolis, Maryland, Trenton, New Jersey, and New York’s City Hall. When the First Congress convened under the U.S. Constitution, the Declaration was given in to the custody of the Secretary of State, returning to Philadelphia. President John Adams directed its move to the Federal City in the District of Columbia in 1800. In the summer of 1814, the threat of unfriendly British caused Secretary of State, James Monroe, to order its evacuation. It was stored in the home of a Reverend. Mr. Littlejohn, at Leesburg, Virginia, for several weeks.

Then it was safely returned to the District of Columbia.

By 1823, it was announced that a prominent engraver, Mr. William J. Stone, has for three years worked on and now completed a facsimile of the Original Declaration of Independence. now in the archives of the government, ”that it is executed with the greatest exactness and fidelity; and that the Department of State has become the purchaser of the plate.” This enabled American citizens to have their own copies of this, America’s Birth Certificate, and also protected the original from unnecessary exposure. What school child of any generation would not recognize this parchment?

Daniel Webster, Secretary of State, in 1841, ordered various articles, including the Declaration, transferred to the National Gallery. Unfortunately, the Declaration along with Washington’s Commission as Commander in Chief, hung on the wall for viewing, and both were exposed to “the chill of winter and the heat of summer.”

The Declaration went back to Philadelphia for the One Hundredth Anniversary, celebrated with a national exhibition. A grandson of Richard Henry Lee spoke on the occasion. The Philadelphia Press described the document as “age dimmed.” At this time, in August, 1876, Congress adopted a Joint Resolution that a commission, consisting of the Secretary of the Interior, the Secretary of the Smithsonian Institution, and the Librarian of Congress, be empowered to find the means to restore the writing of the original manuscript and the signatures.

Throughout the years, the care and preservation of the historical documents of our history have been a primary concern for the Chief of Manuscript Division of the Library of Congress. The papers of George Washington, of James Madison, of Thomas Jefferson, of Alexander Hamilton, and of Benjamin Franklin, were transferred from the Department of State to the Library of Congress in 1903. They are the focus of a legacy, unlike any other nation has ever enjoyed, a legacy of Christian self-government.

In the building housing these Archives, the Declaration has a permanent home, much like a “shrine.” Designed by Francis Bacon (brother of Henry Bacon, architect of the Lincoln Memorial), the site is on the second floor of the Great Hall. Into New York black marble is inscribed, “The Declaration of Independence and the Constitution of the United States.” Surrounding the entire shrine is a solid white balustrade of Italian marble, suggesting the chancel rail before an altar, which from the outside would provide a clear view of the charters.

After the attack on Pearl Harbor, the documents were removed and safely deposited at Fort Knox, until all danger had passed. Hundreds of thousands of citizens gaze at the parchment annually. Some have understanding of their significance, and many do not. Jefferson wrote about the greatest gift of all, Liberty. We are created by the Creator, and we are all born with certain unalienable rights given to us by the Creator, that among these are the right to life, liberty, and the pursuit of happiness. This “right” of liberty will result in all manner of inequalities as we live our individual lives. The ones who work the hardest usually get ahead, the ones who are frugal try to avoid perpetual indebtedness. Those individuals who are good stewards of these rights are blessed by the One who gave these rights.

Patrick Henry gave careful warnings; “Guard with jealous attention the public liberty. Suspect everyone who approaches that jewel, for nothing will preserve it but downright force.”

In Jefferson’s last letter to James Madison, fifty years after they met, he wrote,...”it has been a great solace to me, to believe that you are engaged in vindicating to posterity the course we have pursued for preserving to them, in all their purity, the lessings of self-government, which we had assisted in acquiring for them (the People).

Madison responded, “You cannot look back on the long period of our private friendship and political harmony, with more affecting recollections than I do......and I indulge a confidence that sufficient evidence will find its way to another generation, to ensure, after we are gone, whatever of justice may be withheld whilst we are here.”

The Declaration was not written as a legal document, Praise the Lord.

Jefferson was not a lawyer, nor was Washington or Franklin. The Declaration was an outpouring from the heart of Jefferson. In this First Inaugural, he said it this way, “Sometimes it is said that a man cannot be trusted with the government of himself. Can he, then, be trusted with the government of others? Or have we found angels in the form of kings to govern him?” Jefferson laid the foundation by declaring, “We hold these truths to be self-evident.” This parchment is our anchor, our foundation, of what we believe about ourselves and about sustaining our inalienable rights.

The closeness of Jefferson and Madison was certainly a factor in Madison’s design of the Constitution. The Declaration would spell out the philosophy of who we are as a people, as defined by our Creator. The Constitution defines how we can govern ourselves with the checks and balances to protect us from abuse, from tyranny.

On this July Fourth, on Independence Day, I hope that you will reread the Declaration of Independence and ponder this experiment upon the theory of human rights. When John Quincy Adams took office as President of the United States, he began his inaugural by stating, “ I appear my fellow citizens, in your presence and in that of heaven, to bind myself by the solemnities of religious obligation to the faithful performance of the duties allotted to me in the station to which I have been called….to secure the blessings of liberty to the people of this Union in their successive generations.” Writing a letter to his son, he gave this advice,” You should adopt certain rules and principles for the government of your conduct and temper.. It is in the Bible that you must learn them.” John Adams, the father, wrote “truth, liberty, justice, and benevolence are the everlasting basis of law and government, and if these could be removed, the superstructure is overthrown, of course.”

The founders of this nation were grounded and rooted in the Bible as the source of Truth. They did not look to the government for their identity. Revisionists have rewritten America’s History for public education and the majority of the Media world, but modern Christian scholars, such as David Barton, are helping to rebuild the foundations of America’s Christian History, which is our true History. The parchment, so treasured throughout our history, will continue to be a living document if we claim it, and live by its principles.

With the gracious forcefulness of a true Southern lady, Bobbie Ames confronts us with our current societal dilemma, traces its development, reminds us of our compelling history at God’s Hand, and leads us toward the solution to the recovery of America’s great heritage. This overview of four hundred years of American spiritual struggle and victory should grace every home and educational institution, to read and re-read for decades to come.