A 50-year Story of Love & Devotion 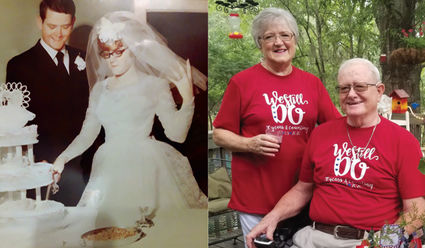 In 1970, they couldn’t imagine their lives in 50 years. Now in 2020, those 50 years have come and gone! Oh, the adventures those 2 young people have experienced! Still ‘young at heart’ their adventures continue!

On July 3, 2020, Everett and Alice Law Cole celebrated their 50th Wedding Anniversary with around 100 friends and family at their home.

Precautions were observed and, as far as they know, no one became sick with COVID-19 because of the gathering of folks to celebrate their Golden Anniversary with them! In 1995, Everett and Alice had renewed their marriage vows with a wedding, also outside, at their home on Butler Mill Road. Using the same book for guests to sign in at all three events created lots of smiles, as guests were able to look back and see where they’d signed this book before.

DeeDee Keahey was just a little girl at the first wedding and really got a kick out of seeing her name in the book way back then! Roxanne Chandler Young’s creative talents were evident in the beautiful arrangements of the ‘fancy tables’ on the back deck where cupcakes and a punch fountain were located. The carport served as location for the tasty bar-b-que sandwiches Carl Boyd had cooked the meat for, decorated in 4th of July décor by the family.

Bruce and Jodi Chesnutt sent Randy, who was one of Everett’s groomsmen and lives in Malibu, CA, a ‘We were Here’ picture so he felt included in the celebration! Their beloved Ben Slauson who had married them in 1970 and 1995 has passed on, but his son, Gary, spent some time visiting with Everett and Alice. Mrs. Lela Foshee and Carron dropped by for a short visit. Many church friends from throughout the years and members of the Military Order of the Purple Heart came out.

The Good Lord has truly blessed the Cole family with health and happiness in spite of Everett being a combat-wounded Marine during the Vietnam War. His grit and determination to be the husband and father God would have him be is well known among their friends and acquaintances. In spite of losing one leg to an explosion in Vietnam and the other damaged very badly, he has lived his life as ‘normally’ as possible, playing baseball, bowling, quail hunting, dove and deer hunting, fresh and salt water fishing, and learning to play the guitar by ear, while stopping smoking in the early 1970s.

Everett and Alice met in the VA Hospital in February 1970, where she was a young clerk typist in Dietetic Service. A ‘hospital romance’ occurred until he was released in May 1970. They were married two months later. Everett and Alice were blessed with three daughters: Tina, Meloney and Helen, and now have eight grandchildren to round out the family!

Living by the philosophy of ‘Making Lemonade when Life Deals you Lemons,’ Everett and Alice have enjoyed visiting all 50 States at least once, during the five total knee replacements, multiple other surgeries on his legs and finally the amputation of the left leg in 2014. Through all of that, the golden couple finished this bucket list item in 2018 with a 6-week, 6,000-mile road trip to the Northwest and cruise to Alaska.

Loretta Grant, founder of the Gazette, has cherished The Coles’ friendship for many decades, and all of us here wish them many more years of wedded bliss!

Everett K. Cole is a U. S. Marine who served in combat in Vietnam, stepped on a mine May 22, 1969 and immediately suffered the loss of the right leg at the ankle with multiple severe shrapnel injuries to the left lower leg, damage to the knee and severe muscle damage to the left thigh.

Read Everett’s complete story in the February 2020 issue of The Alabama Gazette!