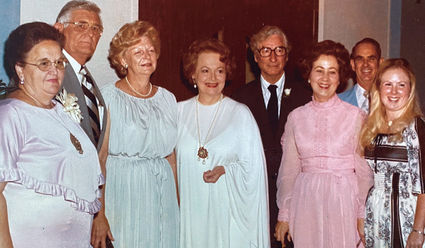 Remembering Olivia de Havilland Melanie Hamilton Wilkes of “Gone with the Wind.” A grand star for over 50 years, with more than 50 feature movies to her credit, she was the last surviving member of the cast of “Gone with the Wind.” She lived in Paris for the last 60 years and was instrumental in taking down the Hollywood studio establishment resulting in better contracts for actors. At the time of her death at age 104, she was the oldest living actor to have won an Academy Award.

Ms. de Havilland was on campus as part of the Great Speaker Series conducted at the University.

After Ms. de Havilland’s comments about her incredible movie career, with a special emphasis on “Gone with the Wind,” Montgomery friends Jack and Mots Rainer along with Troy’s Donal and Sara Lee Dunbar and their daughter Dorothy, enjoyed a private dinner at the President’s home located on campus. At the Adams’ behest, she spent the night on McKinley Drive and the next morning had a thoroughly Southern breakfast with bacon, biscuits, grits and fresh peaches before departing en route to her home in France.

Sam Adams fondly recalls, “The breakfast was not so much my memory as it was my mother’s protocol. When dignitaries stayed at the house, there was a specific meal to be served to let them experience Southern cooking. A lot of them were from overseas or up north and had never had the likes of grits, pecans or Lane cake.”