Playing by the COVID-19 Rules 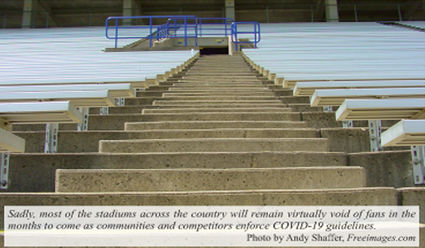 Never in our lifetimes have we seen the Sports World turned upside-down and inside-out.

I find myself disjointed from the sports world. It’s difficult to analyze any of the teams we follow in the normal pattern of past experience. I have to shrug my shoulders at the attempts to do so; it’s almost delusional. So I’ll not write about position players and depth charts and potential recruits. It’s frankly indecorous to report in this fashion.

The NBA is playing in a bubble to protect players from the COVID infection. I’ve stopped watching and I’ve stopped following the NBA. Recently there was a walk out to display solidarity with some of the protests going on in America today. My thoughts on this situation are that these millionaires playing in the NBA should separate themselves from the game and support and protest as they see fit. Play the games, and then protest and show solidarity all they want. The facts are the NBA is living off television revenue; as no fans are allowed. Fans are not allowed to attend for the 2020 and the 2021 season. The players should be mindful of these facts. With ratings for NBA games in the tank, the next television contract will likely not be nearly as lucrative.

MLB is alive and sufficiently interesting enough to watch all the games available. Fans are not allowed to attend the games and similar to the NBA, Major League Baseball is living off television revenue. I’m watching all the games I can schedule in my day using the MLB network. The games are exciting, and MLB seems to have a good handle on the game. The 60-game schedule is close to the end, with 14 games left. The Rays, the Athletics, Indians and White Sox are leading the American League.

The Braves, Cubs and Dodgers are atop the National league. If Atlanta has enough pitching, the Braves might be a real contender. I’m hoping so. I’ve also watched a lot of Washington Nationals games; so much talent, and playing so poorly.

There is a lot of drama in the Rays-Yankees games; who’ll get a high and tight pitch to the head! The Rays’ manager Kevin Cash gives an intimation that a retaliatory attack is eminent after one of his batters nearly received a fastball to the head. And just because I’m an old guy, at left is a book you can pick up on

Amazon.com or other book sites as a good way to remember some baseball heroes from one of the Orioles teams in the 1970s.

NCAA Football is alive, but on life support. We will be missing the Big 10 and the PAC 12 this season. It appears the SEC is sticking with the Conference only games, with a maximum fan attendance of 20 percent plus or minus a percentage point or two. And tailgating is prohibited. Alabama opens its season with an away game at Missouri. Auburn starts off at home against Kentucky. Both games are scheduled for September 26th. At the time of this writing it sure appears the SEC has a reasonably good handle on the conference.

And of course there is a lot of lunacy going on in the NCAA world. Texas in the Big Twelve conference recently announced draconian measures with its Football program. Texas is eliminating more than 70 coaching positions; those remaining are getting a compensation reduction of fifteen percent. When I was in the automotive industry, we referred to that as “getting a haircut.” Tom Herman the head coach is looking at a pay reduction of more than $800,000 dollars. Now I’m not the smartest guy in the room, unless I was at Texas. Pay cuts result in poor performance; and I am confident that no one is exempt from this malady.

I have personal experienced in getting “hair cut” during the 1979-1980 recession. I guess we finally understand the meaning of “Hook Em Horns.”

I think the conference only schedule in the SEC will be amazing to watch.

I plan to watch every game. I think at the end of the season, it won’t be who’s undefeated, rather who has enough players to play. The SEC is the toughest conference and this will be like a NASCAR race from the old days; everybody is banged up. And just as a final thought; how can Ohio State be ranked number one in the first polls, but they are not playing anyone. Now, they rarely play “anyone” with most non-conference games coming from Cup Cake U. But they are really not playing any games this season. But they are ranked number one?

The NFL appears to have a solid plan with the season starting in two weeks. Looking at it now, I believe we will have four kids from Auburn and Alabama as starting quarterbacks. Tua at Miami, Jalen at the Eagles, and either Cam Newton or Jarret Stidham starting for New England. For what it’s worth, my money is on Cam.

At the moment, New England and Green Bay have plans to allow fans to attend the games, at twenty percent capacity at their respective stadiums.

Currently most of the teams are not allowing fans, however I suspect that’s a very fluid situation.

For all of these professional as well as NCAA teams, it’s going to be a bumpy ride this season. As 2020 has shown us, nothing is like it used to be, nothing is normal, and everyday has surprises.