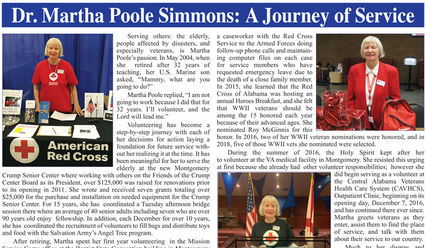 Serving others: the elderly, people affected by disasters, and especially veterans, is Martha Poole's passion. In May 2004, when she retired after 32 years of teaching, her U.S. Marine son asked, "Mammy, what are you going to do?"

Martha Poole replied, "I am not going to work because I did that for 32 years. I'll volunteer, and the Lord will lead me."

Volunteering has become a step-by-step journey with each of her decisions for action laying a foundation for future service without her realizing it at the time. It has been meaningful for her to serve the elderly at the new Montgomery Crump Senior Center where working with others on the Friends of the Crump Center Board as its President, over $125,000 was raised for renovations prior to its opening in 2011. She wrote and received seven grants totaling over $25,000 for the purchase and installation on needed equipment for the Crump Senior Center. For 15 years, she has coordinated a Tuesday afternoon bridge session there where an average of 40 senior adults including seven who are over 90 years old enjoy fellowship. In addition, each December for over 10 years, she has coordinated the recruitment of volunteers to fill bags and distribute toys and food with the Salvation Army's Angel Tree program.

After retiring, Martha spent her first year volunteering in the Mission Service Corps office at the Baptist State Convention building in Montgomery where she kept records and assisted with communications with people who were going on home missions within the United States.

During that time, Martha became trained as a Baptist Disaster Volunteer in the area of administration. Her first disaster trip was to Biloxi, MS, after Hurricane Katrina. She spent one week living in the building of First Baptist Church of Biloxi where she used a computer to compile records of the Baptist chain saw crews. She never met clients during the entire week. At the end of the week, her Baptist supervisor suggested that she go out with the American Red Cross on its Emergency Response Vehicle (ERV) delivering hot meals. Her experience on the ERV led her to decide that she would prefer volunteering with the Red Cross, which provided her contact with clients whom she could offer comfort on a personal basis.

Martha completed the required training to become a Red Cross disaster relief volunteer in 2005-06 and became a driver of the ERV. Her first disaster assignment took her to northwest TN where a tornado had killed 25 people in a rural area. Her experiences with clients there convinced her more than ever that she needed to be a Red Cross disaster relief volunteer, which she has continued do for 15 years. She has served as an ERV driver by delivering meals and supplies all over the nation where clients have been affected by disasters such as hurricanes and tornadoes. Now she teaches the ERV classes training new, younger volunteers and also takes the ERV for maintenance. In addition, she serves as a caseworker with clients who experience loss from fires within the five counties of central Alabama.

In fall 2009, she became a member of Frazer United Methodist Church. After attending a new member orientation class, she was asked to make a commitment to a particular service. She became a volunteer reporter for the monthly publication, Frazer Family News. One of the Frazer members she was assigned to interview was Roy McGinnis, a WWII veteran and hero who survived 18 months as a prisoner of war in Stalag 17.

In addition, she serves with Congregational Care visiting patients in hospitals and nursing homes and as the editor of the roster for the Encouragers Sunday School Class at Frazer.

While serving as a Red Cross volunteer, she became aware of its service to the armed forces. Representing the Red Cross, she attends veterans' patriotic events, and she serves as a speaker at meetings of organizations. She serves as a caseworker with the Red Cross Service to the Armed Forces doing follow-up phone calls and maintaining computer files on each case for service members who have requested emergency leave due to the death of a close family member. In 2015, she learned that the Red Cross of Alabama was hosting an annual Heroes Breakfast, and she felt that WWII veterans should be among the 15 honored each year because of their advanced ages. She nominated Roy McGinnis for this honor. In 2016, two of her WWII veteran nominations were honored, and in 2018, five of those WWII vets she nominated were selected.

During the summer of 2016, the Holy Spirit kept after her to volunteer at the VA medical facility in Montgomery. She resisted this urging at first because she already had other volunteer responsibilities; however she did begin serving as a volunteer at the Central Alabama Veterans Health Care System (CAVHCS), Outpatient Clinic, beginning on its opening day, December 7, 2016, and has continued there ever since. Martha greets veterans as they enter, assist them to find the place of service, and talk with them about their service to our country.

Much to her dismay and disappointment, she learned in fall 2018, that the Alabama Red Cross would not host its annual Heroes Breakfast in March 2019 because the organization had spent so much assisting clients affected by recent hurricanes. She had already prepared the biographies and pictures for nominating WWII veterans for the next Heroes Breakfast. In November 2018, while volunteering at the outpatient clinic, she happened to pick up a copy of the October 2018 issue of the Alabama Gazette at the Information Desk. Seeing this publication spurred her to contact the owner/editor, Loretta Grant, to see if she might be interested in publishing articles about veterans.

Martha Poole is a member of the patriotic organization, Daughters of the American Revolution. She is a former member of the William Bibb Chapter and is currently a member of the Peter Forney Chapter with whom she serves as Co-Chair of the DAR Service for Veterans Committee. At each meeting, she presents a Veterans' Minute describing a veteran's military service. 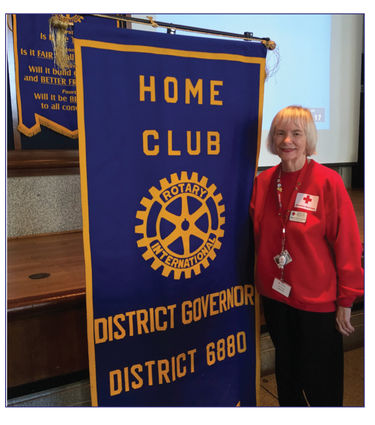 Since December 2018, 116 of her articles about veterans have been published in the Alabama Gazette. When she interviews them using a tape recorder, she is moved almost to tears as she listens to their stories of sacrifice and patriotism. Her articles are not limited to WWII Veterans although they take priority. When she first opens the issue containing the articles and pictures of our nation's heroes, she is again touched deeply. As long as her health remains good, she hopes to continue this privilege of documenting their military service by writing these articles and taking the pictures for the Alabama Gazette. This information is later sent by Martha to the Alabama Department of Archives and History so their data will be preserved digitally forever.

Dr. Martha Poole Simmons says, "Whatever that I do to help others, provides me with opportunities to carry out the message given by Jesus Christ in Matthew 24:40, 'Whatever you did for the least of these, you did for me.'"

We thank you Martha for your continued service to these Veterans!