The Only Game That Matters 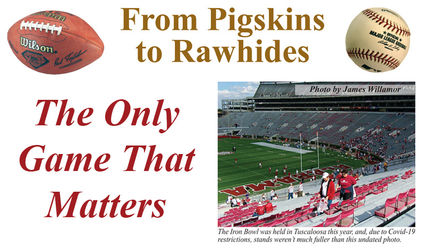 In this unsettling age of COVID we needed this game, and with the season unfolding in the pandemic era, this is the only game that mattered.

You simply could not have imagined a scene like the one we witnessed on November 28, 2020. The stadium at Bryant Denny sparsely populated, neither band nor cheerleaders. And no head coach on the field for the Crimson tide. Coach Saban quarantined at home, not able to coach the Tide. The most highly contested of all football rivalries with only a few fans able to participate. There were no tailgaters and missing was the massive throng of people on the outside. The grounds outside Bryant Denny resembled a ghost town more so than a college campus on a football Saturday.

And so this is familiar to the reality at the Auburn home games. No Tiger Walk, no Eagle flying. No pageantry or mass of folks tailgating and just enjoying the game. A familiar view all across the SEC and College football everywhere. There, as in all of the football world, fans are sparsely scattered amongst the seats in the Goliath stadiums we long to inhabit once again.

Auburn won the toss and elected to receive; an attitude of “let’s light this candle, game on!” The first offensive possession for Auburn consisted of 4 plays, two running plays that yielded 5 yards. On third down, quarterback Bo Nix drops back to pass and is almost immediately sacked by the Crimson Tide defense. We punt the ball away and Bama is in business at their own 35. The Tide’s first play is a running play for a one yard gain. The Tide gets called for illegal formation, and two pass plays go incomplete. We punt, and the War Eagles start their second

possession at their own 10 yard line. A little better results this time, making a first down on the second pass of this series. Followed by a rush for twelve yards; followed by a sack, giving four yards back. Bo Nix completes a pass for ten yards when fourteen were needed. And then, it happens again like so many times coming into this game, followed by several more; I call it the pass to nowhere. That’s what our long ball attack looks like, just find a place downfield that is unoccupied and throw a bomb to it. Never even close to an Auburn receiver. It must be that our offensive coordinator has not read page two of the instruction book yet. Because an effective long game should stretch the opposing defense. BECAUSE the offensive team should be able to complete these passes, well at least once in awhile. Not our guy! NO NO; he evidently believes just throwing the ball to nowhere is a great strategy. So once again we punt.

Now, the Tide is just sputtering like a Norton motorcycle engine sputters, shakes and convulses until it gets warmed up. The Crimson Tide runs Najee for three yards, passes for a first down, and Mac Jones throws a bomb to Devante Smith, and the result is a 66 yard touchdown; point after is good, and the Plainsmen are down 7.

Auburn responds with an eleven-play drive that results in field goal 14–3. Alabama starts their fourth drive from their own 25, and six plays later, you saw it: Mac Jones passes for touchdown number three, and it’s 21–3. Auburn gets possession number five at our own 33, and we run 5 plays; this one features not one but two passes to nowhere. Bama sputters again, runs six plays and then punts to the Tigers. We’re in business at our own 17; we get a first down and move the out near mid-field. Seth runs a great route, and Bo Nix is right on the money with this pass, down the field attempt which was incomplete (Seth should have caught that one). So, we complete a pass for a gain of 25 and seem to get some MoJo going. Until the next three plays, two incomplete passes, and we throw an interception. The half ends with a score remaining 21–3.

The Tigers string a six-play drive together and make a 47-yard field goal. Alabama gets the ball on its own 22 runs two plays and then Bam! Mac Jones makes a 58-yard pass, and holy smokes it’s 28–6, just like that. Twenty seconds and a touchdown. I’m marveling and scratching my head. The Tigers respond with a six-play drive, and Carlson misses a 56-yard field goal attempt. The Crimson Tide gets the ball and runs five plays, the last one a passing play for 40 yards that results in, and you guessed right if you said, Touch Down.

The fourth quarter begins and Alabama continues its 12-play drive with another passing touchdown; the score is now 42–6. Auburn finally puts a drive together and scores a touchdown. Then, the backups come in for The Tide, and it's mop-up time. The game ends Alabama 42 and The Tigers 13.

You know, it just didn’t have to be this way for Auburn. My count is a total of 5 of what I can only describe as a “pass to nowhere.” The fifth and final one in the fourth quarter was so terrible Bo Nix was called for intentional grounding. Now that was a bad call, that pass to nowhere was intended for nowhere. After the penalty, Nix was arguing with the official about the call using hand language to describe where he thought the receiver was. What a tragedy. Tragic in the sense that of the 38 passes Auburn attempted, 23 were completions, 2 were intercepted and of the remaining 13 incomplete passes, one should have been a sure catch, and 5 of those 13 were those passes to nowhere. So fourteen percent of our passing attack were passes to nowhere that never had a prayer of being caught.

And where did running back number 28 for Auburn come from? He is Mark-Antony Richards. He’s a six-foot one freshman whose only action was in the LSU game. Well, happy to meet you, number 28 Mr. Richards, who by the way was the leading rusher for Auburn with 57 yards and over 4 yards per carry. Holy Smokes! He made it into the game because of injuries I suppose. Oh Lawd! Please play him some more before he gets sucked through the gushing transfer portal that many of our up and coming players and prospects have vanished into!

There seems to be little cohesion and chemistry on the Auburn team; the plays were predictable, and I continue to doubt if we have the ability to evaluate and motivate talent. And as I suggested last year, Bo Nix is a great raw talent, and he desperately needs a quarterback coach, a full-time competent and proven QB coach. It makes this fan sad to see how poorly our kids execute. We lost the game Saturday, no need for a recount, but we did not get beat.