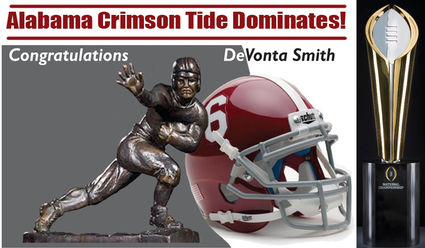 For the first time in 29 years a receiver has won the coveted Heisman Trophy. With one exception in 1997, Devonta Smith won this most impressive award dominated by quarterbacks and running backs. Devonta Smith – “Smitty” a humble and unassuming Crimson Tide receiver has brought home another award for Coach Saban’s bunch in Tuscaloosa. In is extemporaneous acceptance speech, Devonta gave credit to his family, his friends and supporters at home. His honest assessment of himself, as too small, not fast enough and not highly sought after was a huge dose of humbleness much needed by not only the sports world but America as a whole. He encouraged all those “not good enough” to believe in themselves, that his example proves that anything is possible if you will work hard enough, trust in yourself and never give up. For me, his words of encouragement meant more to me than his accomplishments on the field.

Devonta Smith was not on the Heisman radar early in the season. It was widely accepted that the showdown would be between highly touted Trevor Lawrence of Clemson and Kyle Trask a Florida Gator. So who could have imagined a 174 pound 6’1” receiver exploding on the scene to become the best player in college football. The 22-year-old senior from Amite City Louisiana did just that. He amassed 1,641 yards and 20 touchdowns this season, averaging 15.6 yards per catch and 105 receptions. This before his “off the porch” performance in the National Championship Game. Smith also scored a touchdown each rushing and as a punt returner, giving him 22 total scores on the year. He was able to accomplish this despite not opening the season as the Crimson Tide's top receiver, and with more pressure put on his shoulders following an injury to his teammate, and leading receiver Jaylen Waddle. What a season this has been for “Smitty” as he is affectionately know by teammates and head coach Nick Saban.

Seven is the Perfect Number

The Crimson Tide crushed Ohio State 52-24 in Monday nights BCS Championship Game. There is no doubt who is the best team in college football, if there were any doubters. Coach Saban’s Red Elephants played perhaps their best game of the 2020 season last night. The Tide unleashed their quick strike offense and determined defense against the previously undefeated Buckeyes. The Tide powered through an all-SEC schedule and the SEC Championship Game, with their only close game against the Florida Gators. It was coach Saban’s seventh National Title with one of his best Alabama teams, eclipsing Coach Paul “Bear” Bryant’s Six National Titles.

As coach Saban was unceremoniously carried from the field by 324 pound Landon Dickerson he gave all the credit to his 2020 edition of the Alabama Crimson Tide. Coach Saban gave all the credit to his team and their focus on perfection. A great tribute to game preparation and the desire to not be satisfied until they won the game that they fought for all season. It’s no wonder amongst the accolades accumulated by the Alabama program, that rightfully so; the greatest college football dynasty of all time.

Coach Saban smiled a lot, gave his team and coaches credit as he accepted the National Championship Trophy. I believe that he was satisfied, not with himself, rather the team that fought through this most difficult of seasons. Suffering having had COVID himself and setting the tone and presence of the way his team carried themselves all season long. Coach Saban is a humble man and practices what he preaches. My wife Sharon gave me a great birthday gift a number of years ago with tickets to hear Coach Saban speak at the Montgomery Performing Arts center. This is where I learned more about who Nick Saban truly is; I learned his heart. He spoke little of football and mostly about life. How to stay the course, about battling life challenges and about leading, teaching and preparing young men for life. Life on its terms and how to become champions and most importantly how to set goals, achieve them and overcome adversity.

All good wishes and praise for Coach Saban and his Alabama Crimson Tide, a demonstration on and off the field teaching young men how to become men and responsible members of society.

Coach Saban, you are in our prayers and may many more championships be won in the years ahead.

And Then There Were None

This has been a year in sports like we’ve never seen before, and hopefully will never see again. The COVID pandemic struck the sports world just as it has everything in the USA and beyond. We’ve played a complete schedule of college football games and now there are none left in 2020. The college baseball and basketball seasons were cancelled.

We went into college football playoff season with Alabama facing Notre Dame in round one of the BCS game in Texas. Who could have predicted that we would be playing the Rose Bowl in Texas?

The World Series and the entire baseball season were played with no fans present. The LA Dodgers winning it all in game six of the 2020 edition of baseballs championship.

The spring of 2020 saw football spring practice cancelled, baseball spring training cancelled and for a number of months it was very doubtful that either sport would materialize. Virtually all of my coverage of sports dealt with these missing elements of our favorite sports and only by the leadership of the SEC were we able to have college football in 2020.

A 10-game SEC-only season was a very wise decision and all the Cudo’s go to Greg Sankey, the commissioner of the SEC. The games were all played in the 10-game season home and home; all in the respective SEC venues. Our season was very difficult, not only did the teams have very little time to prepare, each team also had to manage COVID in their respective camps.

While the Auburn Tigers struggled mightly once again this season, conversely the Alabama Crimson Tide looked like they simply had another set of gears to jump into; they blasted through the regular season and won an unprecedented 10 SEC games this season. Crushing Auburn in the season finale and coasting to the SEC Championship, besting Florida 52 to 46. The Crimson Tide walloped Notre Dame 31-14 in the Rose Bowl and then squared off in a showdown with Ohio State for the National Championship.

We also witnessed a pitiful football game with Auburn losing to Northwestern 35-19. The Tigers were missing some key players and appeared less than motivated. The Tigers closed out the Gus Malzahn season with the win at Mississippi State 24-10. While a win is a win, I must say after watching the game, it was one of the worst ballgames played by the Tigers in decades. They had enough tools to blow out Mississippi, so players were not the problem. The coaching was horrific, and it was almost unbearable to watch.

Auburn now finds its self with a new head coach, Bryan Harsin and my understanding is that none of the assistants will remain. I believe a fresh start is the best thing that could happen at Auburn. Coach Harsin is a successful football coach bringing in a 71-22 record; a 75% winning record. He is also a successful quarterback coach; this has been sorely lacking at Auburn for years. Frankly, I was hoping Auburn would go for the big “fish” Urban Myer and build a dynasty with him. However, his 12-million a year asking price might be the reason he was not mentioned. It was great to see Auburn Athletic Director Allen Greene make the decision to hire Coach Harsin, rather than knuckling under to the divisive forces in the Auburn nether regions, which cause much more harm than good for the football team. It’s common knowledge that some of the Auburn backers twist arms in order to protect their “position” amongst the Auburn faithful. Allen Greene’s decision was the best choice relative to the Auburn team. Auburn has sufficient talent to compete in the SEC albeit not evident in the 2020 season, with four losses in the SEC and finishing the season 6-5.

This writer is hoping the COVID Vaccine rolls out quickly and that we can get back to some kind of normal for the 2021 season. I join the many fans in our state that missed attending games this past season. Missed the tailgating, the mass of humanity at the games and the electricity that comes from being in the stadium for the games. And for me, most of all, watching that Eagle fly!