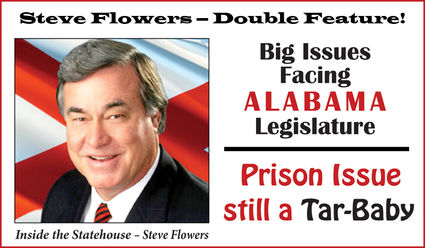 The 2021 legislative session has begun. It will be a monumental and difficult session. Due to COVID restrictions, the logistics of just meeting will be a task. House members will be spread out all over the Statehouse to adhere to distancing requirements. It is still uncertain as to how the Press and lobbyists accommodations will be handled.

A new virtual voting console system has been installed to allow for House members to vote since all will not be on the House floor. There are a myriad of issues that have to be addressed. Last year’s session was abbreviated and adjourned before the halfway point due to the pandemic outbreak. Therefore, it has been almost a year since the legislature has met.

There are hundreds of local bills that have to be addressed for cities and counties. Alabama’s archaic constitution does not allow for home rule. All power rests with the legislature. Therefore, local governments have to come with hat-in-hand to the legislature to make vital decisions.

There are also cursory but urgent economic development incentive laws that need updating. The State Senate led by Senator Greg Reed (R-Jasper) has made a priority of passing legislation that will limit and probably prohibit lawsuits against business stemming from COVID-19.

The paramount issues will be Reapportionment, Gambling and Prisons. The major issue facing the legislature is the Tar Baby known as the prison problem. The governor and legislature have been grappling with the prison problem for several years. Given the legislative absence, Governor Ivey has made executive decisions that some legislators are not totally enthralled with, especially regarding prisons.

The Governor thought they were on course to addressing the state’s overcrowded, understaffed, and violent state prisons. However, the U.S. Department of Justice sued the state in the U.S. District Court in Birmingham in December. The suit alleges that Alabama violates the constitutional rights of prisoners by failure to protect them from assaults and abuse from other inmates, excessive force by correctional officers, and failure to provide safe and sanitary conditions.

This litigation is not unique to Alabama. The Justice Department has made a practice of overshadowing state prisons. Other states have been sued over similar situations. Overcrowding seems to be the over-riding culprit. Federal Courts have ordered states to reduce their prison populations because of overcrowding. California was given this mandate.

Alabama prisons hold more than 15,000 prisoners in facilities designed for fewer than 10,000. Governor Ivey has proposed building three men’s prisons and replacing many of the 13 current prisons. She faces contention and opposition from legislators on this issue. She now will have another Big Brother looking over her shoulder, the U.S. Justice Department and the federal courts.

Governor Ivey’s response to the federal suit is that it is premature and the state has been striving to resolve the crisis. Indeed, the Legislature and the Alabama Department of Corrections has stepped up recruiting of correctional officers and increased pay and bonuses to address the staff shortage. It has cracked down on contraband with a program called “Restore Order,” which uses predawn raids by law enforcement officers to search for weapons, drugs, cell phones and other prohibited items.

Hopefully, the Governor and Legislature will address the omnipresent issue of gambling. Alabama has grappled with gaming for decades. Most of the concentration has focused on whether or not to have a state lottery. While we sat idly by and twiddled our thumbs, every other state in America except the Mormon state of Utah has created a lottery and more. Every state around us, Tennessee, Georgia, Florida, and Mississippi have lotteries. Mississippi funds their entire government to a large degree by every form of gambling imaginable.

In the face of honesty and fairness, the legislature should clarify and rectify the wrong done to the gaming centers at Macon and Greene counties. The citizens of these two Black Belt counties legally and rightfully voted for a Constitutional Amendment to allow them to have gambling and electronic bingo. It is a flagrant disregard of the Constitution for their facilities to be thwarted in their efforts to proceed with their rights and ability to supplement their county’s needs.

The legislature will need to remove the stranglehold and monopoly that the Indian Gambling Syndicate has on our state in order to proceed with allowing people to vote on gaming.