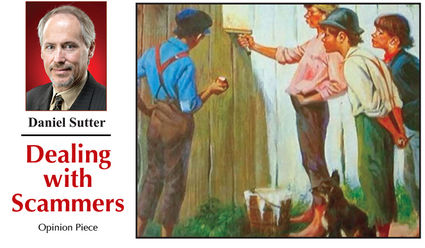 Every society must protect against those who would use violence to steal from others. After controlling criminals, swindlers become a major fear and motivates many government regulations. Yet regulations against fraud allow far worse swindling than markets.

Swindling is always wrong, but most people learn to avoid pedestrian scams like the email from an exiled prince seeking to transfer millions of dollars. Many scams violate customs and laws and the courts will help victims if possible.

Consider how Tom Sawyer convinced the neighborhood boys to whitewash Aunt Polly’s fence for him. The 1967 movie “The Producers” offers another example, with Zero Mostel and Gene Wilder soliciting investments in a play sure to flop.

Such “deals” often do not violate custom or law. Indeed, the other boys happily did Tom’s chores. People who are smart enough to trick us and hurtful enough to not give us our money back threaten commerce.

Asking government, which protects us from criminals, to police cheaters seems quite reasonable. Except that when tailored properly by smart, mean people, laws and regulations ostensibly protecting us can allow us to be taken advantage of.

Why? In the market we are free to not deal with anyone for any reason.

Refusing to do business may seem like a pea shooter response compared to government’s ability to fine or jail. Yet aggregated over millions of consumers, walking away comprises the power of the market, which can humble any firm.

If you doubt the power of the market, look up 1957s Fortune 500. Readers younger than me will recognize few of the companies. Economist Mark Perry found that only 12 percent of companies from 1957 still make the list. If large businesses were more powerful than the market, Sears would still be America’s leading retailer.

Honest people can do more, however, than just refuse to play after being cheated. We devise procedures for honest dealing and exclude those who break our rules.

For example, under the “Merchant Law” in medieval Europe, merchants had to submit disputes to a hearing by another merchant. Merchants not accepting a judgment were barred from future trading fairs.

Stock exchanges were formed by people recognizing the enormous potential for benefits and fraud offered by stocks. Companies wanting their stock traded had to demonstrate they were not a swindle while brokers had to trade honestly to remain members of the exchange.

By contrast, laws and regulations are coercive. The Affordable Care Act required uninsured Americans to buy qualifying policies. Laws must be spelled out in detail and remain in effect until changed. Smart, mean people can shape the details to force us into disadvantageous deals, or essentially legal extortion.

As an example, consider patents, which perform the economically valuable function of rewarding inventors for creating great new devices or medicines. Drug companies though create loopholes to extend their patents. Others take out patents not to protect a new product but rather sue others for patent infringement. “Patent trolls” epitomize the legal swindle.

In a democracy we think that we the people control the laws, including the details. Yet members of Congress boast about not reading the bills they pass. Even if we ensure the integrity of bills, they frequently call for hundreds of pages of regulations which can be gamed. And then come interpretations of the regulations. Like when playing chess with an opponent always two or three moves ahead, we will lose.

Refusing to trade is ultimately far more effective in controlling misconduct. Not only can honest people protect themselves, smart cheaters realize that cheating does not pay. Economists Ross Levine and Yona Rubinstein found that entrepreneurs incorporating new businesses were “smart and illicit:” they broke rules when young but learned that honest business was more profitable.

No one deserves to be conned out of their money. The sentiment to right such wrongs is noble. Unfortunately, laws and regulations outlawing against misbehavior enable even worse scams.