Back in the Air! 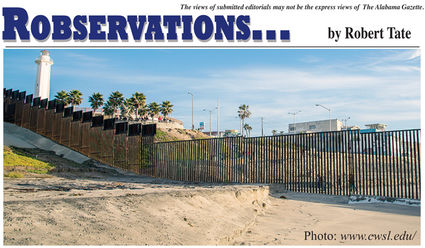 I have to admit. Since my last Robservation, my attention has not been so much on what is going on around the country but clearly focused elsewhere. Perhaps that is a good thing. I did watch President Biden’s pratfall going up the stairs to Air Force One and actually felt sorry for the man – yet again. For anyone watching with an objective, unbiased mind, the man is most definitely not in the game. Over his shoulders watches VP Harris ready to pounce on his job as soon as she gets the green light. It IS going to happen. That WAS and IS the plan all along.

Biden’s fall was embarrassing enough to watch. What was more disturbing was the way the press ran with the story. That is the ones who actually covered it. From the “tricky stairs” to a gust of wind that made him fall (three times nonetheless), the press continues their march into refusing to confront any real issues with our president’s mental and physical shape. Long before the election ever took place, it was clear that Biden was not up to the task of “leading the free world.” It really is that simple. I’m still betting on him not lasting through the year.

For those watching or paying close attention, thanks to the current regime’s inept handling of the immigration situation, our borders are at critical mass right now. It is so bad that even some Democratic politicians are wondering what the heck is going on. You know it is bad when they start to admit it. In the following article (https://www.washingtonexaminer.com/washington-secrets/photos-agents-pulled-from-border-to-feed-diaper-illegal-immigrants.) there are several disturbing facts including a link to several photos of what is going on behind the scenes out of public view. For example:

“What we’ve learned in the past, especially in 2019, is the smugglers will use families and unaccompanied minors as ‘distraction tactics,” said Mark Morgan, the acting commissioner of U.S. Customs and Border Protection under former President Donald Trump. “They know as they push them across illegally, USBP agents will respond to provide immediate and effective humanitarian care. The response, processing, and care required is extremely time-consuming and resource-intensive, resulting in agents being pulled off the front lines, leaving large sections of the border less secure and unmonitored and making it easy to smuggle drugs, criminal migrants, and single adults across wide, unprotected area.”

“Once processed, taxpayers are paying an average of $392.69 per person per night to put them (Illegal immigrants) up in hotels, according to an analysis of the Biden administration's $86 million program by the Center for Immigration Studies. (Yet our soldiers still quartered in Washington D.C. are sleeping on the ground in parking garages.)

“Internal CBP documents obtained by ABC News show there are now 3,889 migrants in the Donna facility that is meant to hold just 250. That means it is currently at 1,556% capacity.”

“The secretary is lying to the American people when he says our borders are secure. With crisis-level numbers of illegal migration being experienced on the borders, more and more resources are being pulled from the front lines resulting in a significant increase of the ‘got aways.’ Because of this administration's dismantling of the effective tools and policies in place, we’re now experiencing the highest levels of got aways in memory – reaching 1,000 per day,”

This article states that border patrol agents are being pulled away from the “Front” in order to feed and diaper illegal immigrants. Uhhh, I don’t think so. Not my job. What is perhaps most disturbing is how the press demonized Trump for detaining kids exactly like Obama did before him and what Biden is doing now on an even grander, grossly incompetent scale. But from the press, the only thing we hear are crickets. President Biden actually issued a gag order preventing Border Patrol agents from talking to the press about what is going on at the border. The regime cannot afford to let the American people know what ishappening. https://news.yahoo.com/biden-admin-restricts-border-patrol-125459995.html. So much for transparency.

The border in the United States today is one H.A.M. I for one cannot believe people are actually okay with what is happening. I watched the news the other day as many illegal immigrants were protesting and demanding rights they most certainly do not come close to having. I thought it was funny that while many of these immigrants have walked hundreds if not thousands of miles, they were able to stop at a local truck stop and load up on Biden/ Harris T-Shirts. Gotta love that one.

How about this one? The Center for Immigration Studies on Monday estimated that at least 2.1 million illegal immigrants could be eligible for $4.38 billion wired directly into their checking accounts, just like the hundreds of millions of legal residents and citizens who started receiving checks last week. What part of illegal do they not understand? I’ll be honest. If I do not get a stimulus check because of what I earn in my job, I really don’t care. I just don’t. I am happy to see people who really need the money getting it. But I tell you what. No matter what my income may be, you had best believe I deserve a stimulus

before anybody who has crossed into our country illegally. Period. Dot. End of story. Sorry. Without giving them any money, which they don’t deserve, how about giving more money to American taxpayers who need it? If it seems as though I don’t care about their needs, if those needs come at the exclusion of American needs, then I don’t. Sorry. I simply don’t. Take care of your own people first and then if, IF there is anything left over, absolutely you help others. But not a second before.

How about Vice-President Harris’ responses when asked about the situation at the border? (https://thepoliticalinsider.com/when-confronted-about-detained-kids-at-border-kamala-harris-dodges-i-havent-been-briefed-today/). First when asked about the huge increase in migrant children flooding the border, she simply says that she had not been briefed on it “today.” Interesting answer because it may in fact be true. Misleading but true. She may have not been briefed on it yet that day, but to imply that she had not ever been briefed is totally unbelievable. She expects us to believe that she has no idea of what is going on at the border because of no briefing “that day.” Then the other day when asked if she was going to visit the border, she laughs and says, “Not today.” She then said she had been there before but was sure that she would probably go again. Another interesting political type answer not requiring any form of truth. By saying she would likely go again opens the door for her to never go again. How about a straight answer? After all, she will be our next President. Get ready for it.

There is going to be so much to write on in the near future, I don’t know where to start at times. Being a 2nd Amendment guy, there is a lot of stuff heading down the pike that will need to be addressed. Another edition of “Schools in Session” may be in order, but that will have to wait. What I was going to write about was that the last three weeks have been pretty grueling for yours truly. I have had eight simulators, two simulator checks, an oral exam, six flights in the jet with an instructor and then was turned loose to fly with a normal First Officer for the last three days of my 5-day trip. This was all part of the normal requalification course for a pilot who has been out of the aircraft from 12-36 months. Although it was a lot of studying and preparation, I am happy to say that it all went without a hitch. But enough of that. I am back in the jet and going out on another trip in two days.

As for the news, the next 6 to 8 months are going to be interesting. When I have more time, I will be writing on a lot of them. Until then, cheers from the surly bonds.