Capitalism and Inequality Dealing with Scammers 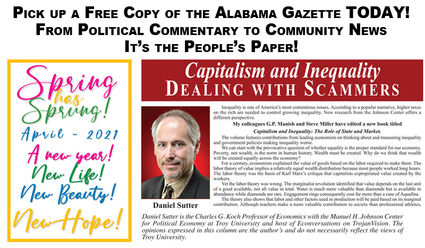 Inequality is one of America’s most contentious issues. According to a popular narrative, higher taxes on the rich are needed to control growing inequality. New research from the Johnson Center offers a different perspective.

My colleagues G.P. Manish and Steve Miller have edited a new book titled

Capitalism and Inequality: The Role of State and Market.

The volume features contributions from leading economists on thinking about and measuring inequality and government policies making inequality worse.

We can start with the provocative question of whether equality is the proper standard for our economy. Poverty, not wealth, is the norm in human history. Wealth must be created. Why do we think that wealth will be created equally across the economy?

For a century, economists explained the value of goods based on the labor required to make them. The labor theory of value implies a relatively equal wealth distribution because most people worked long hours. The labor theory was the basis of Karl Marx’s critique that capitalists expropriated value created by the workers.

Yet the labor theory was wrong. The marginalist revolution identified that value depends on the last unit of a good available, not all value in total. Water is much more valuable than diamonds but is available in abundance while diamonds are rare. Engagement rings consequently cost far more than a case of Aquafina.

The theory also shows that labor and other factors used in production will be paid based on its marginal contribution. Although teachers make a more valuable contribution to society than professional athletes, athletes get paid far more. Many people can teach elementary school; few can throw a football like Patrick Mahomes.

Over the past 300 years free markets have allowed humanity to prosper. But as philosopher James Otteson puts it, “the only way we have ever discovered to enable substantial numbers of people to rise out of poverty is a set of political-economic and cultural institutions that also engender inequality.” Market salaries also strike many as unfair. Mr. Mahomes is lucky to have been born with a talent that allows him to excel in a very popular sport but as a result now has a $500 million contract.

The authors contend that we should worry more about how inequality comes about than unequal outcomes per se. Did someone get rich by capturing a portion of value they create in the market? This does not harm anyone because the value crated makes everyone better off.

Tax return measured inequality jumps significantly in 1987, after the Tax Reform Act of 1986 lowered the top tax rate to 28 percent. No fundamental economic change could have created such an immediate spike in inequality. This is the predicted reporting of previously sheltered income.

The top income tax rate, furthermore, does not necessarily reveal the burden on high earners, or its progressivity. Economists have constructed comprehensive measures of tax progressivity based on households’ shares of taxes paid and income earned. These measures show that the Federal income tax is more progressive now than during the 1950s and 1960s. So much for the income tax holding inequality in check.

In economics and other social sciences, our approach can affect how we interpret what we observe. Capitalism and Inequality seriously challenges the narrative of worsening that inequality requiring punitive taxes on our economy’s great wealth creators.