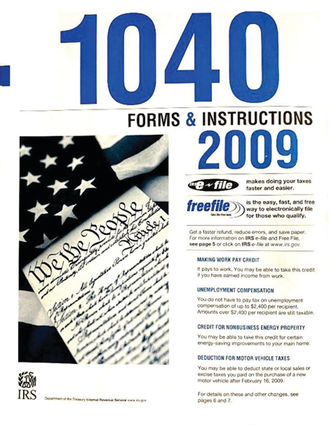 Once again, it is time for all Americans to endure the annual ritual of filing and paying their income taxes. Every year, it seems to become more time consuming and more problematic.

Last year, the IRS published some new schedules to go with the form 1040 and its numerous schedules. However, they did not replace or substitute for any existing paperwork. They were in addition to it. The bad news was that this small booklet didn’t include any of the other schedules that we had filed in the past and still needed to file. Nor were they provided on the rack that had contained them in the past. No printed instructions for them were included either.

The local library said they could be downloaded from irs.gov and printed out at 25 cents per page. There were multiple pages to print, including extra copies for personal records. Instructions also had to be downloaded, and printed copies would include many additional pages.

This year, the library remained closed since March, 2020, but finally re-opened on March 15 of this year, barely a month before the initial April 15 deadline (just advanced to May 17 as I am writing this). I had earlier stopped by a post office to get some forms and found none at all. When I asked a lady who worked there, she told me that the IRS no longer produces printed forms, schedules, or instructions; they all have to be downloaded and printed at the taxpayer’s expense.

She was not quite right on that. The IRS did still print the forms 1040 and 1040-SR (for seniors), along with instructions and schedules 1, 2, and 3. But printed copies of any other needed schedules and their instructions were not provided.

Why does the IRS continue to make it difficult for people to file and pay their taxes? Don’t the tax collectors know that if they want compliance and minimal mistakes, that keeping the process simple and providing all of the materials needed will help make it happen?

This appears to be a scheme that the IRS is concocting to force everybody to file online, and professional tax preparers completely agree. One told me that he doesn’t even do paper returns any more—it’s all online, and the fancy, expensive software that he uses (that he must re-purchase every year to cover changes) does much of the preparation automatically.

Some people like filing online and find it convenient. Refunds can be delivered sooner this way. If you expect a refund most of the time, online filing is probably right for you. Of course the IRS finds it more convenient and can process more returns with less work and manpower. But not all taxpayers like it. Some choose to avoid exposing their bank accounts to hackers and ransomware. Some have found it daunting and fraught with problems for various other reasons. Sometimes the IRS software refuses to process a return for want of an unknown input. Some people are die-hard old schoolers who don’t like being pushed around.

There are portions of our state where internet service is not even available. Even where it is, many areas are serviced with only a single, expensive provider. Combine that with closed libraries, the only option for many people with no internet. And finally, how do we deal with those who live off the grid, are computer illiterate or too poor to own computers, purchase internet service, or pay professional tax preparers?

For many years, filing and paying taxes has continued to become more difficult. The earliest forms, beginning in 1913, consisted of a single page that could be filled out by a novice in a few minutes. Furthermore, only the wealthy had to file or pay any taxes, and the rates were very low—ranging from one percent to a maximum of five percent for multi-millionaires. And don’t forget that a dollar back then was worth fifty or more of today’s dollars.

Over time, tax rates kept rising, and tax returns became more complex, although nothing like the paperwork jungles of today. The Franklin D. Roosevelt regime jacked taxes up sharply, especially in the days after Pearl Harbor. By that time, the threshold of taxable income had dropped down to the poverty level and all but the poorest paupers were required to file and pay taxes. In addition to increased rates, tax withholding began—a scheme that was in part invented by Nobel laureate Milton Friedman to help provide funds for the war effort. After the war, the withholding still remains until today. Friedman later admitted that coming up with the idea was one of his greatest regrets.

Tax rates continued to rise. At one point during the 1950’s, the maximum rate rose to 90 percent for the wealthiest taxpayers, although generous deductions were provided to mitigate the impact.

During the latter half of the 20th century, one of the most painful increases, especially for lower income people, was the FICA tax—up from a modest one percent in 1950 all the way up to 15.3 percent for the self-employed by 1985. Tax returns continued to grow bigger and more complicated.

The IRS people at least provided printed copies of all of the papers that we needed to file our returns. Up until 2010 (for 2009 taxes), they always provided a complete booklet in the mail that contained everything—even including an address label and envelope in which to send the return. That was the last year of automatic deliveries of complete forms and instructions. Note “FORMS & INSTRUCTIONS” in the photo. Never has that been provided in any subsequent year.

From 2011 until 2019, needed paperwork could be picked up at local libraries and post offices, although in later years, a few necessary pages had to be printed from online. In 2020, the IRS quit providing anything except the small booklet with the 1040 forms and the new schedules. It may not be long before there is no printed material at all.

Up until and including last year (2020), we could call an IRS number (800-829-3676) to order forms by mail. That year, it worked fine. A lady promptly answered and took my request. I received the needed materials a few days later. I attempted to order forms and instructions this year with the same number. It seemed to work at first, but when it came time for someone to answer, I was put on hold, which I expected in the beginning. But I stayed on hold—10 minutes, 30 minutes, an hour—until finally my phone battery died. Repeating the procedure another day ended up with the same result—nobody available to take an order—just loud music. So say goodbye to mail order forms.

The news media does not seem to show much interest in addressing tax filing problems. Newspapers, magazines, radio, TV, the internet, and others are wrapped up in COVID-19 issues and have said little about tax issues, except a brief mention in January that new tax forms for 2020 would not be ready until February 12. We were (then) given only a two month window to get our returns prepared and filed. That means more mistakes and more wasted time and anguish to deal with unfamiliar new changes on short notices. And of course, refunds are going to be delayed this year.

If the IRS is really serious about getting people to co-operate in paying their taxes, it should stop putting roadblocks in the way. Quit trying to force people to file online; give everybody the option to file either way. Scrap the new protocols and go back to the simpler forms and procedures of a few decades ago.

For people who file paper forms, help them with the complete booklets used back then—complete—with two copies of all forms and schedules and instructions for all of them contained therein. And add a nice touch, an addressed, postpaid, return envelope.