Tears & Laughter - What is the Significance of Alabama History in 2021? 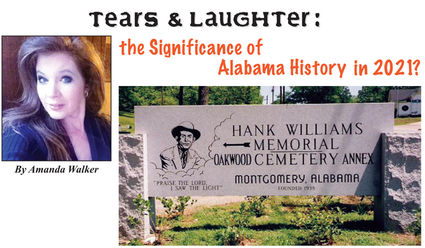 Sometimes, when I am in Montgomery, I make it a point to go out and have lunch with Hank and Audrey.

They don’t ever say too much, and neither do I really.

Nobody sings. If you are there and hear lonesome music, it’s probably only in your head … or maybe your heart.

I go, I guess, for the silence, or the solace. It is a feeling. There is an energy there. Or maybe a spirit. I’m not sure. It is not something you can reach out and touch or take a picture of, at least not without it looking like a couple of equal opposite graves with benches. But you can commune with them for a while, and find stillness within the rush and noise of historic downtown, where the Capitol towers and the State House stands.

I seldom visit when there aren’t fresh flowers placed gently and purposely. Tributes still, to Hank Williams, and to Audrey, too, for as they say … if there had been no Audrey, there would have been no Hank.

Hank was first buried in the main section of Oakwood Cemetery on January 4, 1953, but then was relocated to what became the annex on January 17, 1953. The move was made at night because of the number of visitors to the gravesite. A larger plot was needed to eventually accommodate other family members, and allow for visitation.

You can drive right up to the two Georgia marble monuments like a front door. Like a portal to another time. Oakwood Cemetery and its annex spans 120 acres. It started in 1819, the same year Alabama became a state. It is the home of over 200,000 burial sites. When you sit there with Hank and Audrey, you are surrounded by layers of history.

It was first called a free burial ground. The land was donated. It was open to all people. There are heroes and villains alike buried there. The rich and the poor, blacks and whites. Politicians, preachers, teachers, and attorneys. Slaves, their owners, and anti-secessionists. Beloved mothers, infant children, slabs with first names only, many lost to the yellow fever epidemic, and that precious man who started Coca-Cola Bottling Company.

There is a Jewish section in the cemetery that closes late in the evenings. Those headstones are marked with the names of birth countries, like Bavaria and Prussia.

The last time I visited it was raining. I took time to loop by the row after row of identically shaped tombstones of Confederate dead that cover a whole hillside. There are 780 should you count them, a few Union soldiers included. All sons of somebody. Surely they were not all bad men, but all evidence of the six Civil War hospitals once located in Montgomery.

There are epitaphs, and final remarks, Greek Revival-style mausoleums, Art Deco gravestones, and broken slabs. There are ornate fences, Gothic statues, and simple grey stones marked with only a date.

If the residents of Oakwood Cemetery could wake to where we are today, what would they think of us and this state we have created since they left it? Would they look forward with great anticipation at potentials and possibilities, or would they be blocked from moving forward by the pain, failures, and shortcomings of the past?

This cemetery, like all old cemeteries – in all cities, and towns, and far out forgotten places – holds proof that not all history is beautiful. Some of it is hard to even look at strait.

Amanda Walker is a contributor with AL.com, The Selma Times Journal, Thomasville Times, West Alabama Watchman, and Alabama Gazette. Contact her at Walkerworld77@msn.com or at http://www.facebook.com/AmandaWalker.Columnist.