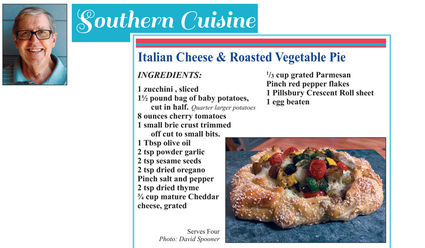 April lived up to the adage, “April showers will bring May flowers,” at least the shower part. I have been trying to do more yard work and re-design my garden. When I have time from work to start on my new garden, it rains. The upside of the rain, is my garden will have a good start in moist soil. Another plus is I have more time to catch up on my binge watching of my favorite shows. The downside is I spend way too much time binge watching cooking shows which produces downloads of recipes to try and more recipes that I find interesting but I will not try. A French recipe for poaching eggs in red wine did not make my list of recipes to try. I can think of a better way to enjoy a bottle of wine than to poach an egg in it. Other tidbits of somewhat useful information I have found include starting my garden plant seeds in eggshells. I know this is not new, but it is the first time I tried it. Try to crack your eggs to produce two small cups. Fill with potting soil and the plant seed. Keep the shell “pots” moist and in the egg container until the seeds sprout. Plant the shell and all, while crushing the shell in the hole for the plant. I found out that the best way to get the shells crushed in the garden is to have your 6-year-old grandchild crush the shells. H was so excited. I started twenty-four seedlings this way and all I had to do was eat twelve eggs. I'm hoping to get poblano and jalapeno peppers, bell peppers and cucumbers this way.

I went to my sister-in-law's for lunch recently and one of the vegetables served was an asparagus dish. It was colorful and delicious and when I asked for the recipe I found out it was easy to make. So of course, on the way home

I had to stop at the grocery store to get the ingredients. It was nice having a vegetable for a meal that did not remind you of winter and picking which “hearty” soup to fix next.

2 bunches (or about 2 pounds) pencil-thin asparagus, tough ends trimmed and cut into 1 to 1 ½ inch pieces

Salt and Pepper to taste

1) To a heated skillet add oil and mustard.

2) Add asparagus and pepper and stir lightly until asparagus is heated through.

3) Serve warm or room temperature. It was even good cold the next day out of the fridge.

As doing my usual surf of the web, I came across a recipe that caught my eye. It is from one of my favorite British stores, Marks and Spencer. M&S has a food section that I can't get enough of. This recipe was screaming for me to make it. After doing more research about the recipe, I found out that there are at least three different variations. I tried the first variation I found and it was boring. It was the British version of the recipe. It did not have much going for it, just bland. It was a recipe from the British Cheese Board pushing British Brie. The other two variations were Mediterranean and Italian. I picked the Italian. The name of the recipe could be changed to any ethnic food group you want with the change of the vegetables and cheeses. So the name reflects that. It is described as crumbly cheese pastry that encases roasted vegetables.

2) Put the vegetables into a roasting pan, sprinkle with olive oil and spices and herbs, toss to mix.

4) Roll out the pastry on a lightly floured surface to a round shape 12 inches across.

5) Transfer to a baking sheet.

6) Lightly press the Cheddar cheese into the pastry sheet leaving a 3 inch border.

7) Pile the vegetables onto the pastry, leaving a border around the edge.

8) Mix the Parmesan and brie into the vegetables

9) Fold the pastry edge over the vegetables, overlapping and sealing it to make a free-from tart. Brush the pastry with beaten egg and sprinkle with sesame seeds.

10) Bake for about 25 minutes, until the pastry is crisp and golden. Serve warm or cold.

When I saw this recipe on Sally's Baking Addiction website, it reminded me of a “fake news”story. The story was that a person tricked into paying $250 for the Neiman Marcus Cookie recipe was taking revenge against the company by distributing the recipe for free. Neiman Marcus publishes their recipe online and has updated the original recipe with a new secret ingredient. I will tell you what this ingredient is, for a limited time, not for $250, not for $100 but for the price of an issue of the Alabama Gazette as advertised on their front page. As long as it is still free. Take One!

1 cup raisins, soaked in warm water for 10 minutes before using, blot very well to dry them (this makes them nice and plump)

1¾ cups semi-sweet chocolate chips (a mix of chocolate and peanut butter flavored chips is how I made them.)

1) Using a hand mixer or a stand mixer fitted with paddle attachment, cream the softened butter and both sugars together on medium speed until smooth, about 2 minutes.

2) Add the eggs and mix on high until combined, about 1 minute

3) Scrape down the sides and bottom of the bowl as needed. Add the vanilla and molasses and mix on high until combined. Set aside.

4) In a separate bowl, whisk the flour, baking soda, cinnamon, and salt together.

5) Add to the wet ingredients and mix on low until combined. Beat in the oats, raisins, and pecans on low speed. Dough will be thick, and very sticky.

6) Chill the dough for 30-60 minutes in the refrigerator (do the full hour if you’re afraid of the cookies spreading too much).

9) Roll balls of dough (about 2 tablespoons of dough per cookie) and place 2 inches apart on the baking sheets. I recommend using a cookie scoop since the dough can be sticky.

10) Bake for 12-14 minutes until lightly browned on the sides. The centers will look very soft and under-baked. Remove from the oven and let cool on baking sheet for 5 minutes before transferring to a wire rack to cool completely. The cookies will continue to “set” on the baking sheet during this time.

Adapted from Loaded Oatmeal Cookies & Oatmeal Creme Pies. Recipe originally published on Sally’s Baking Addiction in 2014. Sally says the reason the cookies are so good is because they have moist and tender centers and light crispy edges, and are sweetened with brown sugar. They are loaded with oats and pecans and are studded with raisins and cinnamon spiced with a buttery flavor.