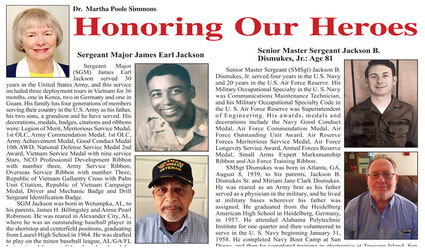 SGM Jackson was born in Wetumpka, AL, to his parents, James H. Billingsley and Annie Pearl Robinson. He was reared in Alexander City, AL, where he was an outstanding baseball player in the shortstop and centerfield positions, graduating from Laurel High School in 1964. He was drafted to play on the minor baseball league, AL/GA/FL Instructional League, GA, where he played for three months.

SGM Jackson volunteered to serve in the U.S. Army to avoid the draft, and he enlisted October 29, 1964, completed Basic Training at Ft. Jackson, SC, followed by training in logistics with supply, maintenance and transportation at Ft. Eustis, VA. At age 18, he deployed to Vietnam for his first tour for 13 months in the Central Highlands with the Military Assistance Command Vietnam (MACV). He returned to Ft. Jackson, SC, for eight months, and although he suffered from PTSD, he received orders to return for a second tour to Vietnam for 11 months to the Central Highlands, serving with a transportation and convoy operation team on route QL19, which ran from An Khe to Pleiku and surrounding provinces where his unit experienced enemy fire and ambushes regularly. Returning to the USA, he was assigned to Ft. Rucker, AL, with an aviation unit for one year. Next, he volunteered for his third tour to Vietnam to the Mekong Delta where he served in engineering clearing jungles, clearing roads and building bridges for one year.

After leaving Vietnam, SGM Jackson was deployed to Karlsruhe, Germany, with engineering at various military bases through the country for three years. He then returned to Ft. Rucker, AL, for two years with support for the aviation school. He then served as a drill sergeant at Ft. Jackson, SC, for four months and at Ft. Gordon, GA, for 2.5 years. Next, he served with the 197th Infantry at Ft. Benning, GA, with a transportation unit for three years.

His second tour to Germany was at Geissen with a transportation unit supporting artillery units in Europe. He next went to Ft. Hood, TX, working for the G4, for Logistics Operation with the 1st Calvary Division for two years. He was then deployed to Camp Casey, Korea, with the 2nd Infantry Division with support logistics where he was awarded the “Leader of the Year Award” as 1st SGT. He returned to the USA for his last two assignments. He served as the Director of Logistics (DOL) as the Sergeant Major for three years at Ft. Benning, GA. Lastly, he served at Ft. Bragg, NC, with the G4 logistics. He retired at Ft. Benning GA, October 31, 1994.

After military retirement, SGM Jackson worked in civil service as a traffic manager with Military Sea Lift Command. He worked at Singapore, Japan and Guam. He served as the boarding officer, inspecting ships that carried supplies to American military to the islands in Southeast Asia in the Pacific Ocean.

He returned to the USA and worked with the Directorate of Logistics (DOL) as the contracting officer for aviation airfields, at Ft. Rucker, AL. This was followed by working as the Traffic Manager at Robins AFB, GA at the Defense Distribution Center, responsible for movement of material world-wide. He also worked as Traffic Manager for Defense Contract Management Agency (DCMA), London, England, an agency of the US federal government responsible for administering contracts for the Department of Defense and other authorized federal agencies. In addition, he had one overseas assignment in Kuwait working with contracts and transportation operations for military units.

His last overseas employment was with the U. S. Army Africa Command, Stuttgart, Germany as Transportation Manager providing logistical support for Africa. His last Department of Defense (DoD) assignment was with United States Army Security Assistance Command (USASAC) which implements assistance programs to eligible foreign governments. He was awarded several Civil Services Medals and Awards during his Civil Service employment. He retired from employment in 2016.

SGM Jackson and his wife, Trinces, have been married 40 years, and they have two sons, two daughters, seven grandchildren and one great-grandchild. He is a member of Chapter 607 Vietnam Veterans of America, and he enjoys working out and volunteering within the community.

SGM Jackson’s conclusions about his military service are, “It was an honor to serve and make a difference. The tradition and example that my father set were my motivating factors to excel. My ambition was to exceed his expectations. He had been my mentor and taught me to how to utilize all military leadership traits and principles. My mom always taught us to always do our best. I never regret not playing professional baseball. My whole mindset changed after my first tour of duty in Vietnam. The military was just great for me at that time and a purpose to be used as an instrument for God’s purpose. In the military, everyone is on the same accord to accomplish the objective. The cohesiveness, structure, bearing, loyalty, dependability, integrity, initiative, unselfishness and endurance that the military teaches are second to none. What you learn in the military can be taken back to your community to make it better.”

SMSgt Dismukes was born in Atlanta, GA, August 8, 1939, to his parents, Jackson B. Dismukes Sr. and Miriam Jane Clark Dismukes. He was reared as an Army brat as his father served as a physician in the military, and he lived at military bases wherever his father was assigned. He graduated from the Heidelberg American High School in Heidelberg, Germany, in 1957. He attended Alabama Polytechnic Institute for one quarter and then volunteered to serve in the U. S. Navy beginning January 31, 1958. He completed Navy Boot Camp at San Diego, and then he completed training in electronics at Treasure Island, San Francisco, CA. He served at a Naval facility communications facility at Morocco. He then went to Washington, D.C. to the “C” School working on specialized equipment. He was then deployed to the Turkish-U.S. Logistics Attachment 12 at Istanbul, Turkey. He was discharged December 22, 1961.

Following his discharge, he graduated from Auburn University with a B.S. Degree in Business Administration in 1965. He worked three years at Sears Roebuck in the credit department and then at First National Bank which later became Regions Bank in Montgomery, AL, in its charge account service as office manager followed by working as branch manager at several branches in Montgomery.

SMSgt Dismukes entered service in the U.S. Air Force Reserve January 1981. The Air Force Reserve is an integral part of our country's dominant presence in air, space and cyberspace. With readiness as its primary charge, the Air Force Reserve contributes daily to the Air Force mission and is actively involved in operations around the world. His team was responsible for the primary engineering emergency force that maintained real property for its unit at Maxwell Air Force Base, Montgomery, AL. The team was ready within 48 hours to go anywhere in the world to rebuild or repair the infrastructure at an air base. SMSgt served one weekend each month and two weeks each summer. In addition, he served Man Days during vacation time from his work at the bank. He was deployed to Eglin Air Force Base, FL, for an operations readiness inspection going through a drill for a combat zone. He also served in Granada and West Germany. He was discharged August 26, 1999.

After he retired from military service, he continued working in Montgomery, AL, at Regions Bank until 2004, and then he ran the security for the Hyundai Motor Company‘s storage park. Next, he worked at American Lock and Key, a locksmith shop for two years retiring from all employment in 2005.

SMSgt Dismukes and his wife, Carolyn, have been married 56 years, and they have two children and three grandchildren. They have enjoyed traveling, especially bus tours, camping and square dancing. They are members of St. James United Methodist Church where he sang tenor in the choir, and they led the senor adult group, Young at Heart.

SMSgt Dismukes’ conclusion about his military service are: “I enjoyed it. It helped me to appreciate what I’ve got, and I feel sorry for those who don’t understand and for those who seem to be proud that they don’t understand. I have always appreciated the service of the veterans, and I am sorry that some don’t get the recognition that they should. I learned on my deployments that if I met the people halfway and would be honest with them, in most cases the people would meet me halfway and would be honest with me. I would like future generations to remember that I loved my country. We were not warmongers, and we were proud of what we did. There are a lot of benefits, and one is the medical coverage of Tri-Care for Life.”

MSgt Durham was born May 22, 1965, in Montgomery, AL, to his parents, Willie George and Susie Mae Durham. He was reared in Montgomery and graduated from Jefferson Davis High School in May 1983. Having participated in U. S. Marine J.R.O.T.C. during high school, he joined the U.S. Marine Corps in July 1983 and completed basic training at Parris Island. He then went to CA for training in personnel administration followed by his first assignment at the Naval Air Station, Millington, TN, a center for training Navy and Marine aviators of helicopters and fixed wing aircraft. He was then deployed to Okinawa as assistant administrative personnel chief for one year. While at Okinawa, he had a six-month TDY to Osan, Korea. Next, MSgt Durham completed training at the Marine recruiter’s school at San Diego, CA. His first recruiting duty was at Birmingham, AL, in 1988-1991 followed by one year at Macon, GA, at Atlanta, GA, for three years and for three years at Montgomery, AL, in 1995 where he supervised other recruiters and where he remained until he retired from military service in October 2003.

Following his military retirement, MSgt Durham spent one year with CINTAX, a uniform supply company, followed by one year of internship with State Farm Insurance Company. He has been a State Farm Insurance agent with his own agency, Willie Durham Agency, at Montgomery, AL, for the past 16 years.

MSgt Durham and his wife, Terrie, have been married 37 years, and they have one son. She serves as the Office Manager of his State Farm Insurance agency. They enjoy traveling, eating at restaurants and reading. They are active members of the New Home Missionary Baptist Church at Mount Meigs, AL, where he serves as the Vice Chairman of the Board of Deacons and sings in a male chorus. She serves as the President of the Deacons Wives. He has a giving spirit toward others in his community as Montgomery Housing Authority,

President of the Montgomery Sunrise Rotary Club, Chairman of the Board of Directors of the Montgomery Chamber of Commerce, Board of Habitat for Humanity, Hope Inspired Ministries and Child Protect. MSgt Durham states, “It is important that if everybody wants this community to be a good community, then everybody needs to find something that he can do to make it better. My faith is important to me. I think that everything that God does is for a reason. When much is given, much is required.”

MSgt Durham expresses the impact of serving as a U.S. Marine as follows, “Because the majority of my career as a Marine was spent in the recruiting service, I was directly impacting recruiting the quality of the people who would be serving the Marine Corps and this country. It really defines who I am as a citizen today. The Marine Corps gives back to the community a much better person than it receives. The Marine Corps gave me self-confidence and the ability to work together with people in my personal life and in my business. It gave me an opportunity to meet a lot of people all over this country.”