The Truth About Critical Race Theory 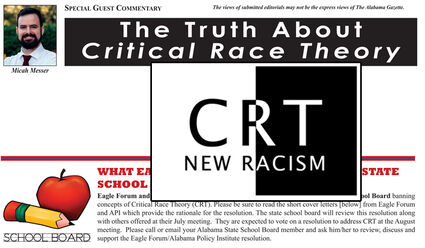 Critical Race Theory at its face is racism and a violation of our Constitution. The United States started as a country with many different people and different cultures. Our history has dark elements, specifically slavery, something everyone should recognize and be willing to face. However, our history does not define our present. Instead, we should study history so we may avoid its pitfalls. Unfortunately, for many in our higher education institutions and government it is being ignored. Yet again, we are facing racism in this country.

Racism has no place in our country.

Critical Race Theory also has no place in our country. Our Declaration of Independence from the British Empire gives all men equality: “We hold these truths to be self-evident, that all men are created equal, that they are endowed by their Creator with certain unalienable Rights…” It took many years and the blood of hundreds of thousands of men and women to bring these rights to all.

Marxism in the form of race classes has begun to seep its way into American life. The 13th, 14th, 15th, and 19th Amendments to the Constitution; the Civil Rights Act of 1964; and the Voting Rights Act of 1965 explicitly give all men and women, without regard to race, the Rights guaranteed in the Constitution and the high ideals of the Declaration of Independence. Critical Race Theory, otherwise known as racism, seeks to strip these away from anyone considered not a minority.

Critical Race Theory argues that the systems of governance, the ideals of the Republic, are at its roots racist. The problem with this idea is it is simply not true. It uses the same concepts outlined by Carl Marx’s pamphlet.

The Communist Manifesto by replacing the “working class” with “race class.”

Racism exists, yes, but our Republic form of government is not built on the predication of racism but rather on the ideals of the Declaration of Independence. Critical Race Theory seeks to bring down equality and our form of government and re-create it into a socialistic society; much like those of the failed Union of Soviet Socialist Republics, Cuba, and China where hundreds of millions of people were killed over the last couple hundred years.

Micah Messer is a Smiths Station Resident, a Veteran, and an IT Professional.