Finally a complete Softball Season in 2021 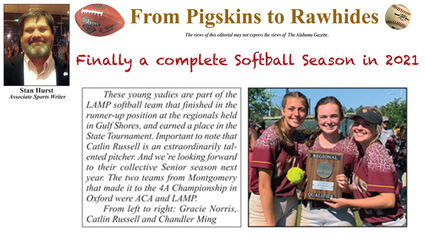 Hello Montgomery! I’ve been away for a while, and I’m so happy to back writing again. I’ve spent the spring and summer watching and taking notes as I enjoyed High School Softball. Now I have a confession, I have a granddaughter playing for LAMP. I went to many tournaments and various games. I got to talk to fans and coaches, umpires and sportscasters. I witnessed amazing athleticism that will surely carry some of the players to the college level.

I was one of the scorekeepers for the regional tournament held at Lagoon Park here in Montgomery. That was an amazing experience and a lot of hard work. I was assigned to Field 5 and ran the board and kept score for every game played on it. I had several teams of sportscasters and journalists that worked beside me, and I got to know them. Some were full-time professionals and some were what I’ll call “bi-vocational” sportscasters. These guys were every bit as good as the other professional teams of sports people. The team from the Columbiana was lots of fun to work with and to see just how polished they were. I was fascinated with their technical prowess. It seems they were missing an important cable when they were setting up their gear. Not to be defeated, they strapped cables and headphones and a Mac together; their work would have made NASA proud.

During the regional tournament I witnessed a pitcher have a 14-strikeout game. I watched as a third basewoman hit back-to-back homeruns and then received two intentional walks at her next two plate appearances. Additionally, I can’t say enough good things about the staff at Lagoon Park. These folks were great to work with and really know how to host a softball tournament. I saw the grounds crew turn a soggy mess into a playable infield in just under an hour. Since I had Field 5, I was responsible for every game played. The grounds crew could rake and restripe the field quicker than I could get down the three flights of steps for a much-needed break. I was amazed at the can-do attitude of the team inside the tower; they served us well.

High school softball players are very serious athletes. Many if not most of them work year-round on their craft. Practice, working out, private coaching instructions, playing full summer and fall seasons, and playing on travel teams. These are comprised of real serious players and coaches and managers and parents, sacrificing time and treasure to make this all happen.

I should note with great concern that Montgomery has lost the opportunity to host the Softball Championship series. Oxford. Ala., hosted this year and will, by contract, host it next year as well. The AHSSA had asked Montgomery to make improvements to our Lagoon Park. Since Montgomery wasn’t “listening” we lost the opportunity to host this great event. Now this championship series has been hosted in Montgomery continuously beginning in 1976! So how in the world did Montgomery lose it? The blame falls upon the previous administration and other elected leaders.

I spoke to an AHSSA official while working the regional championship series at Lagoon Park. The reason is straight-forward: needed improvements have not been made to Lagoon Park. Over the past 20 years Lagoon, which is our park, has needed upgrades, and these have not been accomplished. I have to ask the question: how is it that Oxford Alabama can have the desire and financial commitment to build a state of art softball facility and Montgomery did not? Its leadership, that’s the answer. Montgomery City Government in the prior administration ran rabbits and either overlooked, or simply did not care enough to upgrade Lagoon Park.

As far as Lagoon Park fields, the playing surfaces are exceptional as are the team and leaders tasked with keeping them so. However, it is set up for Men’s Softball, with deep outfields to accommodate adult play. When High School softball games are played on it, temporary fences are set up. Calling them temporary fences is really misleading. These are in fact pedestrian blockades with some foam orange cushions spread across the tops. These temporary fences have gaps at the foul lines. I observed balls hit to deep left field that landed just inside the foul line, then roll through the gap into no-man’s land behind temporary fences – twice!

If you’re an umpire, how do you call that? A ground rule double is the only call you can make. This robs the team at bat from hitting a triple or scoring a run many times. The central tower complex has many challenges, as well, starting with poor lighting inside for night games. Add to that the inability to hear what’s going on down on the field, the inability to hear the homeplate umpire and other umpires. One game I worked had a scenario with a bizarre event that happened with a batter advancing to first, which was called an out. Now I saw a discussion going on and saw the batter head to the bench (there are no dugouts at Lagoon) I scored it an out, which was the call I saw (can’t hear anything). I was very concerned the umpire had lost the number of outs and gave the batting team four. What must have happened is that the call was reversed and then the batting team replaced the player on first with a Sub. Now I could not see it because the discussion took place in front of the first base coaching box in foul territory. So in this case, as a scorekeeper, it would require clairvoyant powers to figure one like this out.

And finally, logistics are perfect for the championship to be played in Montgomery. We’re almost smack dab in the middle of the State. With it played in Oxford, the closest hotel room for my wife, whom attended, was 30-plus miles away. Losing these games is a black eye for Montgomery and our community loses a fortune financially.