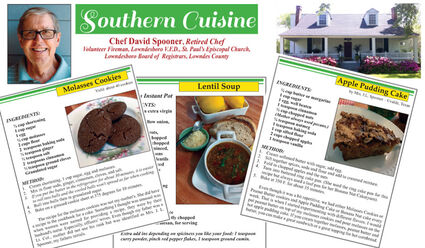 “From the land of Poka-sheen where anything that isn't Bone is no fosh.” That line, in Portuguese, is the description of the Azores on the cover of the Cornerstone CookBook printed at Lajes Field, Azores in1956. I just got the cookbook from my sister. She kept it because our mother has a recipe in it. There is also a connection in the cookbook to a column in the San Antonio Express-News, by Karen Hiram, called “Recipe Find.” Readers write in asking for recipes of something they ate at a restaurant or something their mother made for them. In the cookbook, I found the cut out of the Recipe Find column. Of the ten or so readers that responded with a recipe request for Molasses cookies, one was my mother Ruth Spooner. Karen even quoted my mother's history and description of the recipe.

Spooner writes, “This recipe was given to me in the Azores by a good friend. There were no mixing directions but I mix like any other batter. I make up the dough, roll balls in sugar and put in the refrigerator and take out what I need to bake.

My sons [one of them is me] mixed in the flour as it sometimes is a bit difficult. The cookies spread out and crackle. This is the best Molasses Cookie I have ever tasted. It is very good for a large family or hungry children.”

I have always been a molasses fan, pouring it on my oatmeal, mixing it with peanut butter and poring it over a wedge of hot buttered cornbread. My wife said that the recipes I selected for this month are more a fall selection of recipes. There are seasons when certain vegetables are more plentiful and traditionally we do eat food that is thought of as seasonal. With fast transportation from all parts of the world, just about anything is available anytime of the year. Brussels sprout are a winter vegetable but I just bought a bag of fresh Brussels sprouts yesterday. So right now I could eat Mince Meat pie, put a scoop of ice ream on top it would be a summer-time dessert. I bet that if I wanted to I could buy a watermelon for Christmas.

3. If you put the batter in the refrigerator for about 30 minutes, it is easier to roll into balls and the cooled balls won't spread as far when cooking.

4. Roll into balls then in granulated sugar.

The recipe for the molasses cookies was not my mother's. She did have a recipe in the cookbook for a cake. Something I thought was unusual was when women were named for providing a recipe, they were by their husband's name. Especially, officers’ wives. Even though my father was a Lt. Col., mother did not use his rank but was identified as Mrs. J. L. Spooner, my fathers initials.

2. Sift together spices, soda and flour and add to creamed mixture.

3. Fold in chopped apples and the nuts

4. Turn into buttered ring cake pan. (She used the ring cake pan for this recipe but always used a loaf pan for her Banana Nut Cake(yum).

Even though it was a bit repetitive, we had either Molasses Cookies or Peanut Butter cookies and Apple Pudding Cake or Banana Nut cake every week. That is when I started experimenting with different flavors. I would put peanut butter on top of my molasses cookies and pour molasses on the hot apple pudding cake. If you cream together molasses, peanut butter and butter, you can make a great sandwich or a great topping for hot cornbread.

I have succumbed to the dark force!

I said I would never buy an instant pot. I still have not purchased an instant pot but I have one. A friend of mine, Dave, wanted to upgrade to a bigger model, so he gave me his old one. I should have purchased a new one. To get it home, since I flew, I had to mail it home. Ever since I came home with it, he has needled me to make Coq Au Vin. I wanted to try something that I know how I want it to taste and have a tried and true recipe. You know me enough that I don't have tried and true recipes. Every time I start with a recipe, by the time

I am ready to cook, the recipe has changed. It depends upon how much of certain ingredients I have on hand, what leftovers I have in the refrigerator, and is someone else besides me, is going to eat the result. I like my food, as they say in Spanish,”muy picante” So my first culinary journey into instant pot cooking is Lentil Soup. Nothing gourmet but an item that the instant pot could show off its talent of fast cooking with good tasting results.

I have had mixed results cooking beans. Long cooking times but with a grainy and tasteless pot of legumes. I know how I want my lentils and I want to see if this kitchen gadget will give me my desired results. This recipe is close to what I use as a recipe for Lentil Soup. The best thing about soup, it came be tweaked anyway you want it. As long as you have to eat it with spoon, you can call it soup.

Lentil Soup for an Instant Pot

1. To an Instant Pot, add the oil and set to SAUTE.

2. When the oil is hot add the onion and stir until nicely browned.

3. Add carrots and celery and saute for about 2 minutes.

4. Add the lentils and garlic and thyme and Italian seasoning and other spices desired and season with salt and pepper, stir for about 30 seconds. Then add the tomatoes and broth and stir to combine.

5. Set Instant Pot to cook on High and set for 15 minutes. Once finished, allow the cooker to release pressure naturally. This will take 10 to 15 minutes extra.

6. Remove lid and check for thickness.

7. Add more broth if needed if too thick. A hand immersion mixer is good to make the soup a little thicker.

8. Stir in spinach while soup is still hot.

9. Serve with Parmesan and a crusty bread.

I now have a way to always have fully cooked legumes and not have to cook them all day. Thanks, Dave.