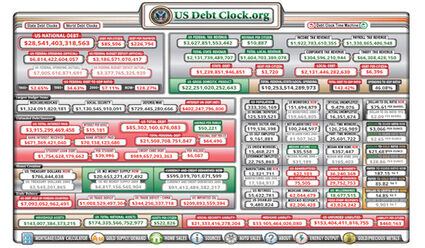 I first wrote this Robservation back in 2013. Yeah, eight years ago.

Sadly, in the context of this subject, things have not gotten better. Not by a long shot. I decided to revisit this subject of our national debt after reading on Breitbart News how the Democrat infrastructure bill will cost U.S. tax payers $5.4 trillion, which will be much more expensive than previously promised. Hmmm, imagine that. Politicians not telling the truth. Who could have seen this coming? http://www.breitbart.com/politics/2021/07/19/analysis-democrat-infrastructure-bill-cost-trillion/. I am not going to say that our country is not in need of some serious infrastructure upgrades, we simply cannot afford these numbers. This will become painfully obvious in a few seconds. This entire discussion reminds me of the movie Apollo 13 when they were trying to figure out the new power-up sequence without going over something like 22 amps. They tried sequence after sequence but failed. When it came to heating the parachutes, the amperage went way “over budget.” Gary Senise’s character argued that without the parachutes, “what’s the point?” One of the engineers fired back something along the lines of, “You are telling me what you want. I’m telling you what we have.”

That is where we are right now. We simply do not have the money to do this. Simply printing money is not the answer. Again, this will be obvious shortly. I have left much of the verbiage the same from the earlier Robservation but have also updated many of the numbers.

When you look at what I wrote eight years ago, you can watch the news today and see some of the ramifications of our growing debt problem. Things mentioned almost a decade ago are coming to fruition today. We cannot continue down this path.

By nature, I am not a numbers guy; never have been. I can’t quite say I hate numbers, but math always scared me. It probably goes back to second grade when I remember I was counting on my fingers in class one day and my teacher yelled at me in front of the whole class. I wish it weren’t the case. I would love to be the guy who could look at any mathematical equation, chemical reaction or physics question, smile, dive in and solve it. I have always been more the right brain, history kind of guy. I love history because it makes sense to me. I understand it and I am pretty good at looking at seemingly dissimilar events and being able to find commonality or division where many people don’t. That being said, I still don’t like those pesky numbers.

Although numbers do tend to scare me, they most certainly have their place. When discussing topics, sometimes strict historical analogies don’t really strike home like I would want but with “in-your-face” numbers, there is often no substitute. If I throw out a number like an estimated 62,000,000 babies having been aborted in the US since Roe vs. Wade (foxnews.com), that number becomes painfully real. Remember the German Holocaust killed close to 12,000,000 people total. What about 13,000–17,000 Russians who died every day during WWII? (Based upon 20-25 million total Russian deaths from the beginning of the German invasion of Russia on 22 June 1941 until the German surrender on 8 May 1945.) If you want to get someone’s attention, stating a correct number is infinitely better than simply saying, “a lot of babies are aborted in the US every year.” Likewise, I am not necessarily talking about the often “slight-of-hand” world of statistics but rather simple numbers. Someone once told me that statistics are like a bikini. They are nice to look at but they cover up the most important parts. How true. When looking at numbers and statistics, it is often too easy to manipulate them in order to prove or disprove your position. I am really hoping not to do that here. All I want to do today is point out some sobering numbers and give some perspective to how large some of our national debt figures are.

The other day, believe it or not, I heard a lawmaker foolishly claim that our national debt was not a problem. I heard another say that we don’t have a spending problem but an income/revenue problem. I listen to both Republican and Democratic lawmakers make claims that cause the hair on my neck stand up. As American citizens, we are unfortunately caught in the middle of a political game of “It’s your fault. No, it’s your fault” with the real culprits hiding behind deluded fantasies in Washington D.C. I really don’t care whose fault it is because our national debt is everyone’s problem and those on both sides of the fence need to seriously address the issue. If any of you have a computer, smart phone or iPad, I recommend going to one of two debt clock websites or download a debt clock App. There are several out there and the site that I am basing this column on is called usadebtclock.com. Once connected to the internet, it updates itself by the second. When you watch it, you will get a sick feeling in your stomach as you see the numbers increasing every second; actually close to $40,000 per second. An even more thorough site is usdebtclock.org. I cannot stress it enough; go to these two sites and take a look. Be prepared to be sick to your stomach. Below are the numbers I copied from usadebtclock.com on

* Unfunded liability means not having assets available to pay a promised debt. For example, if you are flat broke and have absolutely no assets yet have promised to pay me $1,000 per month for a year, you have $12,000 in unfunded liabilities.

Pretty scary stuff, huh? But what is most amazing is that most Americans really have no idea how big these numbers really are and what they mean for all of us and future generations. On most flights, the other pilot and I discuss a myriad of topics. When the situation presents itself, there is one question I almost always ask and only one person has ever actually come close to getting it right. “How long is a trillion seconds?” Take a guess. Now take a look at the answer below and some other surprising numbers. When looking at the example of the trips to the sun and Mars, keep in mind mileage to the sun and other planetary bodies in our solar system vary by the second since everything is constantly in motion. These distances are based on a snapshot in time I took from my GoSkyWatch app. Here goes.

– 1 flight to Mars and part of the way home

– More than one round trip to the Sun

Fox News reported that our government (in 2013):

– Takes in $6 billion in taxes per day

– This of course equates to a $5 billion deficit per day – Quite unsustainable!

The point to all this madness is not to scare anybody but to rather educate. When any elected leader, from either side of the isle, gets on television and tells us that our debt is not a problem, realize he/she is lying. It is a problem. Maybe not today or next year, but without any change in our fiscal behavior, down the road, it cannot be anything but a real problem; both fiscally and morally. If we cannot run our households under the assumption that we will be allowed to spend $11,000 dollars per month while only bringing let’s say $6,000, why should we think it is okay for the government to do the same? Fiscally, it is irresponsible and borderline criminal.

Morally, living in a continued state of growing debt and financial irresponsibility is unbiblical and reprehensible. For just one example, Proverbs 22:7b says, “the borrower becomes the lender’s slave.” As long as we continue to go further in debt to communist China, how can we maintain our political, moral and military standing in the world? We can’t. How much power and influence will China begin to wield against us around the world? We have been feeling this pressure long before the abomination of the recent “sequestration.” We are in a position now where we are reducing our military presence around the world while the Chinese, Russians, Iranians, North Koreans and others are ramping up. (2021 – we just pulled out of Afghanistan) Why shouldn’t they? We are cutting back forces, cutting out training, grounding airplanes, reducing the number of bullets our troops can use for practice, etc. Why? Because we don’t have the money. There is talk of us helping the Syrian rebels. I ask, “With what?” Our good looks?? For crying out loud, the White House recently cancelled all tours until who knows when. Really? We can’t afford the $3 million or so per year for these tours but we can send hundreds of millions of dollars overseas to countries that arguably don’t deserve our aid. A country like America should never be in a position where we don’t have the funds to run basic necessities; especially when our financial problems have been and continue to be caused by mismanagement and party bickering.

Do I think this country is in peril of self-destructing? Yeah, pretty much. Not now at least. But I am saying it is incumbent upon all of us to fully understand what our national debt means to America in the very near future and for the future of our children. We have a lot of work to do and we need to realize that if nothing changes in terms of government spending and waste, everything we have come to know and love about our American lifestyle will change and there is no way around that. We cannot continue on this path without some very nasty ramifications. Even with the most recent talks of raising yet another $1 trillion in new taxes over ten years, it will not help our situation unless we cut our spending. The numbers don’t lie; politicians however, do. Republican and Democrats alike are guilty for where we stand today. Don’t let either of them try to convince you otherwise.