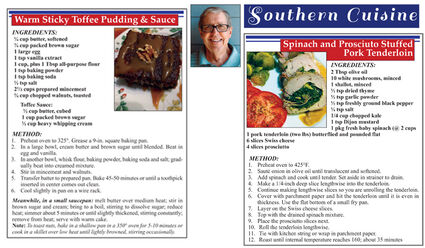 September is the bridge between summer and the start of fall, which is September 22. I can remember some hot Septembers. This is the time when the gardens around Alabama are at their peak in producing the fruits and vegetables that we had planted earlier in the year. The gardeners have been watering, weeding and trying to keep the deer from eating everything down to sticks in the ground. I say this with the voice of experience. All of my okra looked like I planted small sections of a bamboo fishing rod.

If the harvest is good we will have enough to freeze, can or dry to carry us over to the next season. If we have too much of one crop there will always be a neighbor that has too much of a harvest of another crop that you are lacking in and trading time starts. By the end of the growing season you can hope that you have enough and a variety of produce to spare you from having to buy much during the winter.

So my chest freezer and my three refrigerators are full of fruit and vegetables. There are other ways I save on groceries over the year. You would not like to go grocery shopping with me, especially if you are in a hurry. I usually go up and down every aisle and I do it in a certain order. First up and down the dry goods. I keep an eye out for sale items, usually a yellow tag on the shelf. That takes care of the non-refrigerated items, almost half of the store. Next is the produce. If I had a good |growing season and so did my neighbors, I do not have to spend much time there. From there I circle around the outer sections of the store. Dairy items next and then meats. The meat section is where I get some good deals. Some cuts or type of meat do not sell quickly so the stores have some BOGO sales. I like them. My favorite cut of meat that I buy a lot of when they are on sale are pork tenderloins. There are so many ways to cook them and they good with any fruit or vegetable you want to either stuff inside the tenderloin of have as a side. Hence my first recipe is for a stuffed tenderloin. When I am having a tenderloin for a meal, I cook two or three extras. I always have a stuffed tenderloin in the freezer. They freeze well and easy to reheat for a quick meal. I change the sauce and the sides depending on what mood I'm in and what I have in the pantry and freezer. Of the thirteen items in the ingredients list I had to buy two, the mushrooms and the spinach. I have made this dish with frozen spinach but I increase the amount of kale and use less spinach. It is up to your preference.

2. Sauté onion in olive oil until translucent and softened.

3. Add spinach and cook until tender. Set aside in strainer to drain.

4. Make a 1/4-inch deep slice lengthwise into the tenderloin.

5. Continue making lengthwise slices so you are unrolling the tenderloin.

6. Cover with parchment paper and hit the tenderloin until it is even in thickness.

7. Use the flat bottom of a small fry pan.

8. Layer on the Swiss cheese slices.

9. Top with the drained spinach mixture.

10. Place the prosciutto slices next.

12. Tie with kitchen string or wrap in parchment paper.

I am not doing three unrelated recipes here. I decided to do a complete meal. The last time I did this was for a Valentine”s Dinner. It is not any special meal, just that I like Brussels Sprout and had a large supply of frozen and fresh Brussels Sprout. And yes I do believe it is called Brussels Sprout. And I like Ina Garten recipes and her cooking show, Cook Like A Pro.

12 oz Brussels sprouts, trimmed and quartered through the core

2. Add the bacon and cook, stirring occasionally, for 5 to 7 minutes, until browned and crisp.

3. With a slotted spoon, transfer the bacon to a plate lined with a paper towel and set aside.

4. Add the onion and shallots to the pan and saute for 5 minutes, until lightly browned.

7. Add the butter and cook uncovered for 5 more minutes, until the sprouts are tender.

8. Stir in cooked bacon and balsamic vinegar and stir to deglaze the pan.

9. Sprinkle lightly with salt and serve

The third recipe for my dinner has an ingredient that is not nearly as popular as it was before the 1940s.

The Washington Post, in a 1907 editorial said, “There is no other pie to take its place. Custard pie is good and so is apple pie, but neither has the uplifting power and the soothing gratifying flavor possessed by mince pie when served hot, with a crisp brown crust.”

It was the indispensable comfort food dispatched to American expeditionary forces in World War I to reinforce their morale with the taste of home. As an icon of the American way, apple pie is a johnny-come-lately, a usurper, a pale pretender to its pastry throne. The phrase, as American as apple pie, is of 20th-century origin and didn't attain wide currency until the 1940s.

I found this story about mincemeat on a web site; http://www.chicagoreader.com/

chicago/mince-pie-the-real-american-pie. It is very well written and interesting

history. And this is the ingredient for my final recipe.

2. In a large bowl, cream butter and brown sugar until blended. Beat in egg and vanilla.

4. Stir in mincemeat and walnuts.

5. Transfer batter to prepared pan. Bake 45-50 minutes or until a toothpick inserted in center comes out clean.

6. Cool slightly in pan on a wire rack.

Meanwhile, in a small saucepan: melt butter over medium heat; stir in brown sugar and cream; bring to a boil, stirring to dissolve sugar; reduce heat; simmer about 5 minutes or until slightly thickened, stirring constantly; remove from heat; serve with warm cake.

Note: To toast nuts, bake in a shallow pan in a 350° oven for 5-10 minutes or cook in a skillet over low heat until lightly browned, stirring occasionally.