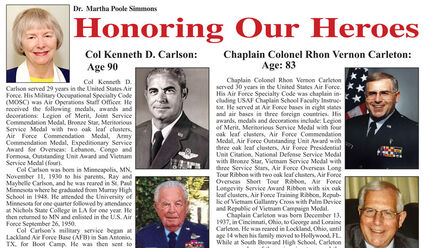 Col Carlson was born in Minneapolis, MN, November 11, 1930 to his parents, Ray and Maybelle Carlson, and he was reared in St. Paul Minnesota where he graduated from Murray High School in 1948. He attended the University of Minnesota for one quarter followed by attendance at Nichols State College in LA for one year. He then returned to MN and enlisted in the U.S. Air Force September 26, 1950.

Col Carlson’s military service began at Lackland Air Force Base (AFB) in San Antonio, TX, for Boot Camp. He was then sent to Sheppard AFB, TX, then to Kessler AFB, MS, becoming a radar mechanic on B-29’s and B-50’s. In 1953, he became an aviation cadet training in the Piper Cubs, T-6, T-28 and T-33. He was commissioned in July 1954, and after training in the F-86 at Nellis AFB, NV, he was assigned to the 50th Fighter Bomber Wing at Hahn AB, Germany, with a tactical nuclear mission and later transferred to Toul-Rousiere AB France. He returned to the United States in 1957 to Donaldson AFB, SC, where he flew C-124 Globemasters. This three-year tour took him to conflicts in Lebanon, Formosa and the Congo with many transits through Greece, Turkey, Iran, and Libya as well as various Down Range Sites in support of the early space flights.

In 1959, Col Carlson attended the Squadron Officers School at Maxwell AFB, AL. In 1961, he was reassigned to the Air Force Ground Electronics School at Kessler AFB, MS, followed by assignment to the Air Force Technical Application Center in Alexandria, VA, where he was introduced to computers. After three years, Col Carlson was sent to Military Airlift Command (MAC) to serve as the Chief of the Command Control Computer Center. It was there Col Carlson became an instructor-pilot in the T-39 Saber-liner carrying VIP’s all over the U.S. A. He was then deployed to Saigon, Vietnam, to serve as the “only pilot” assigned to the Data Management Agency of MACV HQ. Col Carlson returned to the United States to run the Air Force Command Post Computer Center at the Pentagon. While in the Washington, D. C. area, he then continued his T-39 flying duties, and he graduated from the University of Maryland with a B.S. Degree in Business in 1973. His last assignment was as Vice-Commander and Commander of the Data Automation Agency at Gunter AFS, AL. Col

Col Carlson and his wife, Mary Ann, have been married 66 years, and they have five children, six grandchildren and five great-grandchildren. He worked as a broker with the investment firm E. F. Hutton for 14 years 1979-1993. He has served as Program Chairman for 13 years and Flight Captain of the Daedalians, a fraternal order of military pilots. In addition, Col Carlson has served others as President of the Montgomery Catholic High School PTO and as a member of the Mobile Archdiocese Board of Education for eight years. In addition, he has served on the Parish Council and Finance Council of St. Bede Church, on the Board of Seton Haven, an assisted living facility, and on the Board of Catholic Social Services in Montgomery, AL. He served as the President of the Military Officers Association of America (MOAA) in Montgomery, AL. He served as a volunteer with A.A.R. P. during the income tax season helping the elderly with their income tax filings for 15 years.

Col Carlson’s conclusions about military service are, “The Air Force gave me many opportunities. I will never forget those who worked for me and those for whom I served. It was a team effort.”

Chaplain Carleton was born December 13, 1937, in Cincinnati, Ohio, to George and Loraine Carleton. He was reared in Lockland, Ohio, until age 14 when his family moved to Hollywood, FL. While at South Broward High School, Carleton was a member of the swimming team and the science club, played saxophone in the band and graduated in the class of 1955.

He was called into Christian ministry during his freshman year at Florida State University and enrolled in the Air Force ROTC Pre-Chaplaincy program. He graduated with a Bachelor of Arts Degree in History with an English literature minor and was recognized as an AFROTC Distinguished Graduate. Upon graduation in 1959, he was commissioned a Second Lieutenant.

He continued his post-graduate education on a tuition free scholarship at Duke University, Divinity School. During this time, he served as a freshman house master for two years and taught the American Red Cross Water Safety Instructor’s Course on the Duke University staff. Carleton received a Master of Divinity degree in 1962 majoring in Clinical Pastoral Education. He later served on the Duke Divinity National Alumni Board from 2011 to 2015.

His areas of interest include Biblical studies, clinical pastoral care, marriage and family counseling, and drug and alcohol addiction rehabilitation. While in Air Command and Staff College, Carleton received the award for Most Outstanding Contribution to Research for his paper on “A Viable Program for USAF Drug Abuse Rehabilitation.” In addition, he earned a Master of Science Degree in Guidance and Counseling from Troy State University in 1972. He utilized this background while on the staff of the USAF Chaplain School to establish a therapeutic (TC) community behind the walls of Draper Correctional Center, Elmore, AL. He and his students from the Chaplain School visited TC inmates at the Draper Center to hear their stories concerning what approaches were successful in rehabilitation. Chaplain Carleton was also actively involved with teaching counseling and quality management in the Air Force and civilian communities.

Following his retirement, he served interim pastorates in Montgomery, Selma, and Weogufka, AL. He taught Choice Theory and Reality Therapy as a Senior Faculty Member of the William Glasser Institute in the United States, Canada, Alaska, Korea, Japan, Ireland, and Singapore. In 1998, he founded the hospital chaplaincy and served as a clinical chaplain in the Montgomery, AL, Baptist Medical Center East for a ten year period. John Ed Mathison invited him to join the staff of Frazer United Methodist Church in 2008 where he remains to the present. The Carletons are members of the Sowers Sunday School Class where Rhon serves as a teacher.

Chaplain Carleton and his wife, Carol, have been married 55 years, and they have two daughters, two grandsons, one granddaughter and one great-granddaughter. As a military chaplain, he encouraged military personnel and assisted them during hardship and adversity. Chaplain Carleton’s conclusions concerning his military service are: “From my initial calling in my freshman year of college to my retirement, I have felt blessed to have the opportunity to serve others and my country in ministry.”

He was reared there and graduated from Albert Lea High School in 1953. After working for a truck-gardener for several summers, he graduated from

St. Olaf College with a B.A. Degree in Business and Economics in 1957. Having participated in the Air Force R.O.T.C., he was commissioned as a Second Lieutenant at his graduation and began active military service July 19, 1958.

Lt Col Fossum was deployed as a postal officer for four years to Japan first to Misawa Air Force Base for two years followed by a two-year assignment at Fuchu Air Station at Tokyo, Japan. Lt Col Fossum then graduated from Texas A. &. M. University with a Master’s Degree in Business Administration in 1964.

Lt. Col Fossum began his work as a Systems Analyst in Personnel at Scott AFB, IL, for 4.5 years followed by assignment at Randolph AFB, TX, for five years. He completed training at the Air Force Command and Staff College at Maxwell AFB, AL. He served five years at Gunter Air Force Station as the Director of Personnel of 2500 automation types where he retired from military service September 30, 1979.

Lt Col Fossum’s reflections on his military career are, “I enjoyed everyone of my assignments, and I was grateful. The Air Force was good to me, and I tried to be a good servant to the Air Force. I liked my job. I would like future generations to remember this about me: I pursued a love for my country and a respect for its flag. I tried to help, and I hope that I was a good leader and a good family.”

After his military retirement, Lt Col Fossum worked at the AL Department of Economic and Community Affairs in the area of employment and training of personnel for 16 years. He has been involved in the antique business operating five booths at the Eastbrook Flea Market in Montgomery, AL. His passion is hunting deer, dove, ducks, geese and turkey as well as fishing. He has been a member of the Retired Officers Association at Maxwell AFB.

Lt. Col Fossum and his wife, Pat, have been married 63 years, and they have two children. Pat is world triathlon (swimming, running and cycling) champion having won six gold, 15 silver and six bronze medals for her age group. Pat accompanied him on all at his duty stations and supported his military and civilian careers. Pat’s conclusions about her role as the wife of an Air Force officer are, “It was a wonderful life. I enjoyed it. There were at lot of moves, but I got used to that. I got use to leaving friends and meeting new friends.