Thirteen Heroes We Must Never Forget 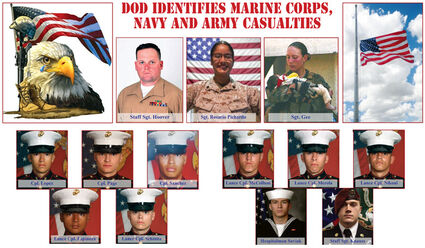 As I watched 13 brave American heroes being brought home after being killed in Afghanistan, it was tragic and heartbreaking.

All but one were in their early to mid-twenties. They choose to defend the homeland while many of their classmates are playing beer pong, hanging out at the beach and enjoying life without regard to the dangerous world we live in. They gave their lives for freedom and are shining examples of what it really means to be an American. They and their fellow heroes who volunteer for military service are the best among us. Let me highlight five of them.

His older sister posted to Instagram “I’ve never been one for politics and I’m not going to start now. What I will say is that my beautiful, intelligent, beat-to-the-sound of his own drum, annoying, charming baby brother was killed yesterday helping to save lives,” the sister wrote.

“He was a medic, there to help people. and now he is gone, and my family will never be the same. There is a large Maxton-sized hole that will never be filled,” Kareem Nikoui, 20, Marine – He was from Norco, California. Nikoui’s

father told The Daily Beast his son “loved what he was doing” and “always wanted to be a Marine. He really loved that [Marine Corps] family. He was devoted – he was going to make a career out of this, and he wanted to go. No hesitation for him to be called to duty,” his dad said.

David Lee Espinoza, 20, Marines – He was from Laredo, Texas and graduated from Lyndon Johnson high school. Representative Henry Cuellar (D-Texas) wrote this on Twitter, “Mr. Espinoza, a Laredo Marine killed in Afghanistan, embodied the values of America: grit, dedication, service, and valor. When he joined the military after high school, he did so with the intention of protecting our nation and demonstrating his selfless acts of service”

Rylee McCollum, 20, Marines – McCollum, from Bondurant, Wyoming, was on his first deployment, had just gotten married, and was three weeks away from being a dad when he was killed in the blast, according to the Casper Star Tribune. “He wanted to be a Marine his whole life and carried around his rifle in his diapers and cowboy boots,” McCollum’s sister Roice McCollum told the outlet.

“He was determined to be in infantry … Rylee wanted to be a history teacher and a wrestling coach when he finished serving his country. He’s a tough, kind, loving kid who made an impact on everyone he met. His joke and wit brought so much joy,” she spoke.

Just days before her death, Gee posted a photo on Instagram of herself in uniform while holding a baby in Afghanistan with the caption, “I love my job.”

All thirteen have similar stories. They all loved this great country. They all knew that they may have to make the supreme sacrifice, but they signed up anyway. My dad certainly knew when he enlisted to be a Marine. We must never forget these heroes, and the hundreds of thousands that have gone before them.

We must be eternally grateful for their sacrifice, or all is lost for our country.