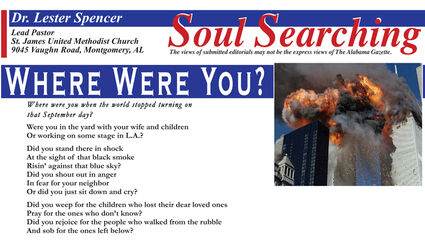 Where were you when the world stopped turning on that September day?

Were you in the yard with your wife and children

Or working on some stage in L.A.?

Did you stand there in shock

At the sight of that black smoke

Risin’ against that blue sky?

Did you shout out in anger

In fear for your neighbor

Or did you just sit down and cry?

Pray for the ones who don’t know?

Did you rejoice for the people who walked from the rubble

And sob for the ones left below?

Did you burst out with pride

For the red, white and blue

And the heroes who died

Just doin‘ what they do?

Did you look up to heaven for some kind of answer

And look at yourself and what really matters?

I’m not a real political man

But I’m not sure I can tell you

The difference in Iraq and Iran

But I know Jesus and I talk to God

And I remember this from when I was young

Faith, hope and love are some good things He gave us

And the greatest is love

“Where were you (When the world stopped turning)” is a song written and recorded by American country music singer Alan Jackson. The song is based on Jackson’s own experience on September 11, 2001. Jackson had finished walking outside and returned indoors to discover news of the attacks on television. He immediately wanted to write a song expressing his thoughts and emotions, but he found it hard to do so for many weeks. “I didn’t want to write a patriotic song,” Jackson said. “And I didn’t want it to be vengeful, either. But I didn’t want to forget about how I felt and how I knew other people felt that day.”

Finally, on the Sunday morning of October 28, 2001, he awoke at 4 a.m. with the melody, opening lines, and chorus going through his mind. He hastily got out of bed, still in his underwear, and sang them into a hand-held digital recorder so as to remember them later on. Later that morning, when his wife and children had gone to Sunday school, he sat down in his study and completed the lyrics.

Initially, he felt squeamish about recording it, much less releasing it as a single, because he disliked the idea of capitalizing on a tragedy. But after he played it for his wife Denise and for his producer, Keith Stegall, both of whom gave their approval, Jackson went into the studio to record “Where Were You?” that week. On Stegall’s advice, Jackson played the finished track for a group of executives at his record label. “We just kind of looked at one another,” RCA Label Group chairman Joe Galante said later. “Nobody spoke for a full minute.”

Where were you when September 11, 2001 happened? I remember exactly where I was. I was at work at Saint James Church where I serve as the Lead Pastor. My friend and church member, David Woods, President, and owner of WCOV-FOX TV here in Montgomery, called me on my cell phone and said, “Are you watching the TV right now?”

I said, “No, I am at work like most normal people.”

I was standing in the lobby of our church when he called so I ran over to a TV mounted on the wall and turned the TV on to a news channel just in time to see the World Trade Center engulfed in flames and the second plane hit the other tower. I immediately called my wife Janeese to tell her what was happening. Her office was in the church building too, and I told her to come down to the lobby to witness this horrible event unfold.

Our church staff gathered around the TVs in the lobbies as well, and we all watched in disbelief as this horrible terrorist attack unfolded. We were not sure at first if this was a just a tragic accident where a commercial airliner somehow got off course and hit the World Trade Center or if it was some kind of terrorist attack. But when the second plan hit the other tower, I think everyone knew then that this was no accident. The United States was under attack on our soil for the first time in my lifetime.

We dismissed the staff and told them to gather their children, go home, pray for our country, and stay safe. As we went to our homes that day, watched the news channels and gathered our families around us, we didn’t know at that time if there were more attacks coming or what was next. It was a traumatic and scary few weeks and months as the country reeled in the horror of the attacks and the devastation of the Twin Towers and the Pentagon.

The USA was united in prayer like I had never seen. We prayed for our country and for the many thousands of victims killed and wounded! We prayed for the first responders who risked their lives to save others!

We prayed for our US soldiers who were preparing to defend our country and attack the enemies who had perpetrated this cowardly, terrorist act.

We hugged and kissed our spouses! We held our children tight around us! We read our Bibles like we hadn’t done in a long time! We gathered to worship together as our churches filled up on Sunday mornings! We prayed like we meant it! We thanked God for our blessings, our families, our country, and our places of worship!

Where were you when the world stopped turnin’ on that September day?