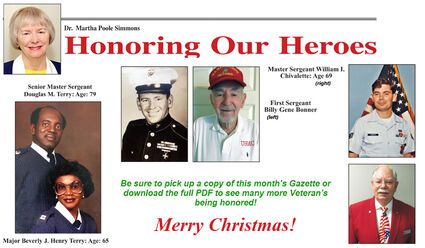 SMSgt Terry was born September 20, 1942, to his parents, John and Maggie Terry, in Springfield, TN. He was reared there, and he graduated from Bransford High School in 1960. SMSgt Terry volunteered for military service and began his service in the U. S. Air Force March 14, 1961.

SMSgt Terry completed Boot Camp at Lackland Air Force Base (AFB)) at San Antonio, TX,. He served in the Security Police at the following military bases: Yokota Air Base, Japan, Eglin AFB, FL, Izmir, Turkey, Wright Patterson AFB, OH, Udorn AB, Thailand, Grissom AFB, IN, Osan AB, Korea, Elmendorf AFB, AK, and F. E. Warren AFB, WY. SMSgt served in a combat location at Tan Son Nan Nhut Air Base, Vietnam, where he was in the first mortar attack there April 13, 1966. His post was described as the most dangerous depicted in photographs. The post suffered many casualties after his tour ended; however he was one of the first three men to man this post every night for eight months.

SMSgt Terry continued his education by attending Ball State University, IN, taking courses from University of Pittsburg, attending TN State University, TN, and attaining numerous graduate and undergraduate credits through the Community College of the USAF. Since his military retirement, he has worked in numerous security management jobs including Security Supervisor for ARCO ALASKA in Prudhoe Bay, Alaska, Correctional Officer with Alaska State Dept. of Corrections, Anchorage, Alaska, and Security Manager at the Performing Arts Center, Columbus, GA. He retired from all employment in 2008.

SMGt Terry and his wife, Beverly, have been married 42 years, and they have three children, three grandchildren and five great-grandchildren. He enjoys exercising especially running and playing basketball in which he played with one of Izmir Turkey’s semi-pro teams for years.

SMSgt Terry’s conclusions about his military service are: “Military service has meant the world to me. No other words can describe my gratitude. I want future generations to remember that I served with honor, loyalty and humility.”

Major Terry was born April 7, 1956, at Ft. Mitchell, AL, to her parents, Joseph and Idella Henry. She was reared there and graduated from Mt. Olive High School in 1972. Major Terry graduated from AL State University in May 1976 with a B.S. Degree in Sociology where she participated in the U.S. Air Force R.O.T.C. and served as a captain. She also did some post graduate study at Northern Colorado University. While serving in the U. S. Air Force, she completed the following courses: Dynamics of International Terrorism, Industrial Security, Counterterrorism and courses at the USAF Special Operations School.

Since military service, Major Terry worked for the Department of Juvenile Justice in Anchorage, AK, served as the Security Officer for ARCO Alaska at Prudhoe Bay, AK, and served as the social work administrator for the Municipal Courts for the city of Anchorage, AK. She retired from all employment in June 1995.

Major Terry and her husband, Douglas M. Terry, have been married 42 years, and they have three children, three grandchildren and five great-grandchildren. She has enjoyed traveling and reading, and she has been an active member of churches wherever she lived including Shilo Missionary Baptist Church in Anchorage, Alaska. She has sung alto in the choirs of churches. She is a member of Who’s Who Women of America, the Alabama State University Alumni Association and the National Ataxia Foundation.

Major Terry’s conclusions about her military service are: “I was proud to serve my country. It gave me the opportunity to further my education.” She would like to be remembered as one of few Black female officers to serve in the U. S. Air Force Security Career Field with pride and determination to set an example for those young, future Black officers to follow. # end #

1st Sgt Bonner was born January 28, 1931 in Goodwater, AL, to his parents, John T. Bonner and Gillie Duck Bonner. He lived with his mother and grandparents who moved frequently within Elmore County, AL as his grandfather was a sharecropper. He graduated from Wetumpka High School in 1950.

1st Sgt. Bonner volunteered and enlisted in the U. S. Marine Corps March 6, 1950. He completed Boot Camp at the Marine Corps Recruit Depot, Parris Island, S. C. He was assigned to Dispersing because of his mathematical and typing abilities. He remained at Parris Island working as a general’s orderly for two months. He then volunteered to serve in the Marine’s infantry completing training at Camp LeJeune. He was then deployed to Korea where he endured extremely cold conditions with temperatures of 20 degrees below zero upon his arrival. The Marines slept outside in the weather without being able to erect a tent, and he wore the same clothes for six weeks. He fought in combat for four months and 27 days until he was wounded. He was treated at the U. S. Naval Hospital in Yokosuka, Japan for three months followed by treatment at the rehabilitation center at Otsu, Japan. He remained there as a clerk typist for six months making reservations for military service personnel going on R. & R. (rest and recuperation) and coaching the men’s basketball team.

1st Sgt Bonner was then sent to the Naval Air Station at Pensacola, FL, as a clerk typist for almost one year. This was followed by four weeks of training at the Marine Recruiting School at Parris Island. He served at Columbia, S.C. as a supply man in the Marine recruiting office where his first four years ended. He reenlisted in the Marine Corps and served as a Marine recruiter at Spartanburg, S.C., for one year followed by two years at Hickory, N.C., and then to Supply School at Marine Corps Base Camp LeJeune for four months where he remained working with an artillery outfit as the supply chief. Next, he served as the supply chief at the Naval Air Station at Buford, S.C. for one year. He then served three years as a Marine recruiter in Montgomery, AL during 1959-1963. He was deployed to Okinawa on an unaccompanied tour where he worked as the supply chief for one year. He returned to Montgomery, AL, as a Marine recruiter serving 1965-1968 and was promoted to 1st Sgt. in 1966. In 1968, he was deployed to Vietnam and served as 1st Sergeant to Headquarters and Service Company. His Vietnam service ended after six months because of illness in 1969. He was then assigned to the Naval Air Station in Pensacola, FL, for service in the guard platoon office for three months followed by service at the Marine Corps Base Camp Lejeune, N.C., as 1st Sgt for Headquarters and Service for three months where he retired from military service September 30, 1969.

1st Sgt. Bonner and his wife Bonnie Bonner were married for 26 years and had two children, five grandchildren and 16 great-grandchildren.

After his military retirement, he used the G.I. Bill to complete training in an air conditioning school at the John Patterson Trade School in Montgomery, AL. He worked for the Mid South Supply Company in Natchitoches, LA, for five years. He then started his own company, Bonner Industrial Supply, and after 15 years, he retired in 1995. He is a bass fisherman participating in bass fishing tournaments with professionals throughout the states of AL, GA, FL, LA, TX and AR where he has been successful in winning cash prizes at many of these tournaments. He joined First United Methodist Church in Wetumpka, AL, in 1946, and he has since rejoined this church. He has been a member of the Wetumpka Lions Club and a member of the Natchitoches, LA, Kiwanis Club where he served as the chairman of the winter coat project. He was recognized as the Citizen of the Year by a civic club in Millbrook, AL, because of his service starting and organizing the Dixie Youth Baseball and the youth football programs.

1st Sgt. Bonner’s conclusions about his service with the U.S. Marine Corps are: “I feel like that serving in the Marine Corps I probably couldn’t have had a profession that I was more suited for than I was as a Marine. I think that having been on recruiting duty for 12 years of my 20 years, every time I signed up a Marine that I was doing him a favor. I let the recruits know that it would be hard. Some of the Marines that I had recruited later came by to see me, and I felt like I had made an impression on them. I felt like I was honored to have survived because I had a lot of close calls. The Lord had better things for me. No one in my family has ever lived past 80, and I am now 90.” #end#

MSgt Chivalette was born to his parents, Theodore William Chivalette and Elizabeth Joann Maupin Chivalette, December 20, 1951, in Yuma, AZ. He was reared in VA and then in Jacksonville Beach, FL, where he graduated from Fletcher High School in 1970. Following graduation, MSgt Chivalette volunteered and enlisted in the United States Air Force March 25, 1971, at the Jacksonville Naval Air Station. He completed six weeks of Basic Training at Lackland Air Force Base (AFB), TX. From 1971-1985, he served as a Security Policeman at Homestead AFB, FL, Tahkli Royal AFB, Thailand, and K. I. Sawyer AFB, MI. He provided security for nuclear weapons at Homestead AFB, K.I. Sawyer AFB and Barksdale AFB. He served as Air Force Historian at Barksdale AFB, LA., at Osan AB, Korea, and at Lajes AB, Azores during Operations Desert Shield and Storm.

MSgt Chivalette received an award from the Korean JACEES for volunteer service with Korean orphans. He wrote two consecutive histories on the 2nd Bomb Wing’s support of the Gulf War, which earned him honors as one of the best wing history programs in the Air Force. His reward from receiving those honors was his accompanying a hand picked group to the Ukraine in 1995, the first such visit since WWII.

Following his military retirement, March 31, 1995, MSgt Chivalette served as the Director of Operations for the Airman Memorial Museum in Washington, D.C. beginning July 25, 1995. While there he authored and edited the first enlisted history, Unsung Heroes, and nine other enlisted specific books. Unsung Heroes was placed on the CSAF’s Reading List in 2000 and was issued to all AF enlisted Leadership School attendees. MSgt Chivalette served as the Curator of the Air Force Enlisted Heritage Hall (EHH) March 16, 1998, until June 30, 2018. He directed the building of 190 displays and won 36 awards for the displays as well as receiving 85 awards personally. He retired from Civil Service with 20 years, three months and 14 days as Curator of the Air Force Enlisted Heritage Hall.

Since retirement, MSgt Chivalette has volunteered at the Air Force Enlisted Heritage Hall and with the Veterans of Foreign Wars (VFW) helping veterans in need. He has constructed whirligig airplanes and four birdhouses, and he has enjoyed participating in activities at the Montgomery Crump Senior Center. MSgt Chivalette has continued writing books including a massive book for the Curator of the Air Force Enlisted Heritage Museum chronicling all major events that took place at the EHH from 1998 to 2018. He holds a life membership with the USAF Museum Foundation, Inc. and the VFW. He has been a member of the Air Force Sergeants Association, the Noncommissioned Officers Association, the American Association of Museums the Alabama Museum Association and the Southeastern Museum Conference. In addition, while serving as Director of the EHH, Chivalette served on the Hospitality Committee of the Montgomery Chamber of Commerce.

MSgt Chivalette and his wife, Dang, have been married 48 years, and they have two children, 10 grandchildren and one great-grandchild.

MSgt Chivalette’s conclusions about his military service are, “My Dad said, ‘Military service would make a man out of you!’” His words were true to MSgt Chivalette. It gave him a purpose, and his experiences in Southeast Asia and in the Air Force made him realize how precious life is. He enjoyed his Air Force career and prizes honesty and integrity above all else. He tries to serve the Lord every day. #end#