Christ is Born; Glorify Him! 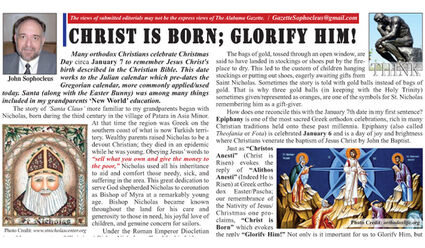 Many orthodox Christians celebrate Christmas Day circa January 7 to remember Jesus Christ's birth described in the Christian Bible. This date works to the Julian calendar which pre-dates the Gregorian calendar, more commonly applied/used today. Santa (along with the Easter Bunny) was among many things included in my grandparents ‘New World’ education.

The story of ‘Santa Claus’ more familiar to my grandparents began with Nicholas, born during the third century in the village of Patara in Asia Minor. At that time the region was Greek on the southern coast of what is now Turkish territory. Wealthy parents raised Nicholas to be a devout Christian; they died in an epidemic while he was young. Obeying Jesus’ words to “sell what you own and give the money to the poor,” Nicholas used all his inheritance to aid and comfort those needy, sick, and suffering in the area. This great dedication to serve God shepherded Nicholas to coronation as Bishop of Myra at a remarkably young age. Bishop Nicholas became known throughout the land for his care and generosity to those in need, his joyful love of children, and genuine concern for sailors.

Under the Roman Emperor Diocletian (a ruthless persecutor of Christians) Bishop Nicholas suffered for his faith, was exiled and imprisoned. The prisons were full of bishops, priests, and deacons hated by despotic Romans as Christians received more favour and respect as ones truly “Philoptochos” – i.e., “Friends of the Poor.” After his release (surviving imprisonment) Nicholas attended the Council of Nicaea in AD 325. He died December 6, AD 343 in Myra and buried in his cathedral church, where a unique relic (some call manna) formed at his grave. This liquid substance, said to have healing powers, continued the growing devotion to Nicholas which remains persistent today. The anniversary of his death became a day of celebrated remembrance (Saint Nicholas Day) on December 6th; December 19 on the Julian Calendar.

I find continuous veneration of any person who died almost 1700 years ago salient. Many accounts, stories and legends have been (re)told of St. Nicholas’ life and accomplishments. These facts and folklore help one understand his exemplary character and why Nicholas was so beloved and revered as protector and helper of those in need.

One of the more notable stories is of a poor man, father of three daughters. In those days a young woman’s father had to offer prospective husbands something of value – a ‘preeka’ – i.e., a dowry. Larger dowries supposedly increased the chance a daughter would find a ‘good’ husband. The economist in me would like to know the proxy for ‘good’ and any empirical verification of this assertion. In short, without a dowry, a woman was unlikely to marry. This poor man’s daughters, without dowries, were destined to be sold into slavery. Mysteriously, on three different occasions, a bag of gold appeared in their home… providing the desperately wanted dowries.

The bags of gold, tossed through an open window, are said to have landed in stockings or shoes put by the fireplace to dry. This led to the custom of children hanging stockings or putting out shoes, eagerly awaiting gifts from Saint Nicholas. Sometimes the story is told with gold balls instead of bags of gold. That is why three gold balls (in keeping with the Holy Trinity) sometimes given/represented as oranges, are one of the symbols for St. Nicholas remembering him as a gift-giver.

How does one reconcile this with the January 7th date in my first sentence? Epiphany is one of the most sacred Greek orthodox celebrations, rich in many Christian traditions held onto these past millennia. Epiphany (also called Theofania or Fota) is celebrated January 6 and is a day of joy and brightness where Christians venerate the baptism of Jesus Christ by John the Baptist.

Just as “Christos Anesti” (Christ is Risen) evokes the reply of “Alithos Anesti” (Indeed He is Risen) at Greek orthodox Easter/Pascha; our remembrance of the Nativity of Jesus/ Christmas one proclaims, “Christ is Born” which evokes the reply “Glorify Him!” Not only is it important for us to Glorify Him, but realize how many times we’re called upon each day to do so righteously. This column is intended to be at least one sobering moment in your Christmas celebration to think about how important it is to be an integral part of standing against the evil enveloping us. I pray all who know the power of Jesus Christ’s teachings will take Him into their hearts this blessed season and overcome the distraction of consumerism and destruction by the politburo who’ve made government their god. I know the Holy Spirit in Jesus Christ, Son of the true God is indeed greater than the spirit of evil in the sons of Nimrod, Caesar(s) et al because it is His name which remains above all nations.

This small Child of God, born in a cave resulting from the decree of a despot directing the world on a course toward increasing darkness, in the City of David among the lowest of mankind by worldly standards would do more to bring Light and the Spirit of Zion to a wicked world than Rome could possibly contain. The wicked want the righteous to give in or die. As you celebrate the beginning of Jesus Christ’s path into this world during the Christmas season, comprehend the magnitude of the mission His Father set Christ upon. If you truly believe and adhere to His teachings, it destroys the power of death and darkness. Without this fear Rome’s (and the many leviathans to follow) ability to advance their despotic ends is thwarted. Jesus showed us the way; it is up to us to have the courage, faith and wisdom to follow. If we do not stand well against evil and corruption in our everyday lives, we’re failing Him and the righteous efforts many suffered so mankind may not be compelled to endure the agony of Roman despotism again. Resistance to tyranny is obedience to God. You can be God’s servant OR a servant to Rome; it is impossible to serve both. It really is that simple. The choice is yours …

So my cherished Alabama Gazette readers: CHRIST IS BORN!

Postscript: This column is dedicated to my paternal grandmother, Despina Sophocleus, a long time member of the Greek Ladies Philoptochos Society and true ‘Friend of the Poor’ who came to the US after surviving the ‘Burning the Smyrna.’ Little surprise, Despina [Diana] was very familiar with Nicholas, from her home region she held dear. As for her similar enduring lesson on the timing of Pascha, Yiayia [Grandma] Sophocleus taught me why the chocolate Easter bunnies were so much bigger and better when our Pascha date occurred well after all my non-Greek friends Easter celebration – wait for those after holiday sale rock-bottom prices!