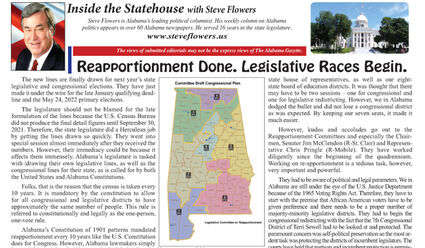 The new lines are finally drawn for next year’s state legislative and congressional elections. They have just made it under the wire for the late January qualifying deadline and the May 24, 2022 primary elections.

The legislature should not be blamed for the late formulation of the lines because the U.S. Census Bureau did not produce the final detail figures until September 30, 2021. Therefore, the state legislature did a Herculean job by getting the lines drawn so quickly. They went into special session almost immediately after they received the numbers. However, their immediacy could be because it affects them immensely. Alabama’s legislature is tasked with |drawing their own legislative lines, as well as the congressional lines for their state, as is called for by both the United States and Alabama Constitutions.

Folks, that is the reason that the census is taken every 10 years. It is mandatory by the constitution to allow for all congressional and legislative districts to have approximately the same number of people. This rule is referred to constitutionally and legally as the one-person, one-vote rule.

Alabama’s Constitution of 1901 patterns mandated reapportionment every 10 years like the U.S. Constitution does for Congress. However, Alabama lawmakers simply ignored this mandate for 60 years. The legislative lines had become so unfairly unconstitutionally out of proportion that it was comical. As a young page, I observed the representation in the House and knew something was wrong. My county of Pike had 25,000 people and we had two representatives and the Huntsville area had grown to over 200,000 people and they had only two representatives. Lowndes County had a population of 15,000 and had one senator. Jefferson County with a population of 635,000 had one senator. The Black Belt had gotten an unfair distribution of seats during the 1901 constitutional approval debate and had not relinquished their legislative power.

Finally, the federal courts stepped in and dictated one-man, one-vote districts in the now famous Reynolds v. Sims case in the 1960s, which set the one-man, one-vote principle for the entire nation. It still amazes me that the good people of Jefferson, Madison, and essentially all of north Alabama allowed this incredible injustice to exist for 60 years.

The recently completed Reapportionment Session has drawn the new lines for our seven congressional seats, our 35 state senate seats and 105 seats in the state house of representatives, as well as our eight-state board of education districts. It was thought that there may have to be two sessions – one for congressional and one for legislative redistricting. However, we in Alabama dodged the bullet and did not lose a congressional district as was expected. By keeping our seven seats, it made it much easier.

However, kudos and accolades go out to the Reapportionment Committees and especially the Chairmen, Senator Jim McClendon (R-St. Clair) and Representative Chris Pringle (R-Mobile). They have worked diligently since the beginning of the quadrennium.

Working on re-apportionment is a tedious task, however, very important and powerful.

They had to be aware of political and legal parameters. We in Alabama are still under the eye of the U.S. Justice Department because of the 1965 Voting Rights Act. Therefore, they have to start with the premise that African American voters have to be given preference and there needs to be a proper number of majority-minority legislative districts. They had to begin the congressional redistricting with the fact that the 7th Congressional District of Terri Sewell had to be looked at and protected. The paramount concern was self-political preservation so the most ardent task was protecting the districts of incumbent legislators. The courts have held that partisan and incumbent protection is permissible as long as you do not get too carried away with gerrymandering.

The super majority Republican legislature was attentive to what might trigger an adverse judicial ruling on the redistricting plans. Chairman Chris Pringle was very attentive to not creating new Republican districts. They figured that the 77 Republican to 28 Democrat advantage in the House and the 27 Republican to 8 Democrats in the Senate was enough. The courts might see that as regressing or suppressing African American Democratic political power.

It was actually difficult to avoid adding new Republican seats because the population growth has been in Republican leaning enclaves. The Democratic Senators and House members are quietly pleased with the plan because it was incumbent friendly. In other words, the cardinal rule in reapportionment is that you take care of yourself first. Party, race, and colleagues come second.

Under the new congressional lines, we will more than certainly still have six Republican and one minority Democratic district.