And Then There Were Two … Bama Faces Georgia in Title Game 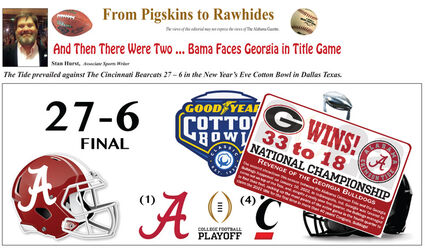 PREFACE from Editor on the 2022 National Championship: Revenge of the Georgia Bulldogs

Georgia Wins 2022 National Championship as it Beats Alabama 33 to 18.

The second showdown this season between the Alabama Crimson Tide and the Georgia Bulldogs happened on January 10, 2022, in Indianapolis, Ind. Georgia was favored to come out on top of the Tide, and, despite a really slow first quarter, the Bulldogs managed to find their feet, racking up the most points of the entire game in the fourth quarter to claim the 2022 title for the first time in more than 40 years! Congrats, Bulldogs!

The Tide prevailed against The Cincinnati Bearcats 27 – 6 in the New Year’s Eve Cotton Bowl in Dallas Texas.

With a whole lot of hoopla, Cincinnati trash talking and a little uncertainly the game would come off due to another rise in Covid outbreaks, we were treated to yet another amazing victory by the Alabama Crimson Tide. The Tide 2.0 featured a rejuvenated offense line and a running attack that was powerful and relentless. This was certainly not expected by me, and, obviously, the Bearcats, as well. It’s not surprising the fashion in which 2021 finished. There were cancelled bowl games, last moment replacement teams in bowl games, and lots of COVID to go around.

Brian Robinson rushed for 408 yards, the most by any Alabama player in a bowl game. The fifth-year senior has rushed for 1275 yards, averaging 5.1 yards per carry this season, so far. Robinson is quite a story, patiently waiting his turn as the starter. He carried the ball 249 yards this season, bearing most of the load for Bama’s run game. A significant change from the 91 carries in 2020, playing behind Najee Harris. Robinson had 14 touchdowns on the ground and caught 31 passes for 268 yards, which included 2 touchdowns.

Robinson was quoted after the game:

The Tides offensive line had a dramatically improved outing against the Bearcats. I think they challenged themselves to be the Tide OT that we are accustomed to seeing.

Heisman Trophy winner Bryce Young and company were successful moving the ball through the air, producing 181 yards and three touchdowns. While watching, it was apparent the running was very effective, so stick with it.

And all of this must be prefaced of course; we are living through an amazing time in Alabama Football History since Coach Saban arrived on the scene to coach the Tide 15 years ago [today], January 3, 2007.

In the telling of the Cotton Bowl, obviously it’s important to concede; much to the chagrin of some fans, that it’s difficult to grasp the complexities of a successful college football program. Believe it or not, that’s one of the reasons there are press conferences after each game.

I understand that coach Saban, Bill O’Brien and his team created this specific offensive package for the Bearcats defense, to exploit their defensive configuration, and the Cincinnati team just could not adjust to this “new look” Tide running attack.

Alabama has morphed from its “quick strike” offensive under offensive coordinators Lane Kiffin and Steve Sarkisian to a more moderate passing attack under O.C. Bill O’Brien. I think Alabama’s offensive change is dictated more by injured personnel than philosophy at the moment.

Remember Alabama lost 11 players from last year’s class. And there have been injuries to some of the starters on the offensive line. We lost right guard Emil Ekyior; additionally, the right tackle was lost late in the game as well. These are just from the Cotton Bowl. The good news is that Coach Saban is expecting some of the walking wounded back to play in the Title game.

While the Crimson Tide’s passing game has been hugely successful, if the Tide is able to run against Georgia, this will absolutely change the metrics of the game.