We're NOT a Democracy! 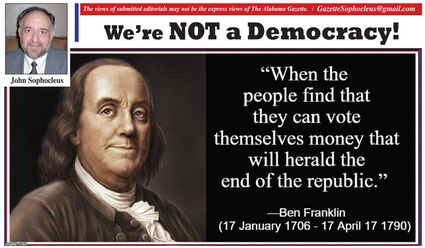 There... I’ve finally typed it.

Dr. Franklin didn’t answer, “You have a democracy - as long as you can keep it!” in Philadelphia after closing the Constitutional Convention. Framers and Delegates understood the ills and ends of all democracies, devoutly to be avoided.

No matter how many times this poor nomenclature is bantered about by corrupt politburo members - from my county commission, to Goat Hill, all the way up to Moscow on the Potomac -- it doesn’t alter the design submitted and adopted in our 1789 Constitution. The growing, desperate, shrill assertions of ‘Democracy’ by political pundits, apparatchiks, Pravda-style media and all the other champions of command and control economies these past several score also does NOT make Democracy a reality. Further claims in alarm, declaring this nonexistent, over-romanticized structure [Democracy] in jeopardy aids and abets our political swindlers’ camouflaging of the observed more oligarchic result - i.e., political power increasingly more concentrated away from the people.

Okay, a result observed by a few, like some Alabama Gazette readers who commented on my ‘Peaceful Transfer of Power’ column [https://www.alabamagazette.com/story/2021/01/01/opinion/peaceful-transfer-of-power-pax-romana-style/2063.html] wondering if I had ‘inside information’ writing it before the Jan. 6th DC protest. Those seeing irony witnessing the fraction of protestors who indeed turned violent appearing very much like the end result of democracies while being driven by federal hegemony were outstanding! Similarly compelling was commentary on politburo members championing democracy at the same time asserting no reason to arm and protect ourselves from people, while shamefully quick to barricade and summon weapons to defend themselves against the harm they promoted via so many unconstitutional actions. Sad these political thieves, who’ve destroyed so many lives, are so self-serving they’ve completely lost all capacity for empathy to consider why their hosts are angry at the parasites.

I’ve read Jefferson’s Declaration making the case for independence and our 1789 Constitution many times; never recall finding the word or the case being made for democracy. Art. 4, Sec. 4 makes clear each State must guarantee a republican form of government, providing sound guidelines in Art. 1, Sec. 2 on how this representative Republic of States will operate at the federal level to execute those few powers enumerated to the central government. Of course, I don’t expect my incompetent ‘Felon Hubbard’ minion congressperson to understand this or champion a movement to make the House representative again as a Trump sycophant; a big govt. modern NY Democrat now wearing the Red jersey. Similarly, our minority gerrymandered congressperson who played one of the larger roles of making people homeless via eminent domain abuse (another ‘Trump-love’ item) is championing ‘voters rights’ but offers nothing to make the House (much less other geo-political divisions in our State) more representative. These ‘public servants’ will continue to cry “Democracy!” while my county and the cities within become even LESS representative shown in the new census data and redistricting outcomes.

No competent federal jurist would accept, much less champion ‘one man one vote’ feel-good diatribes if they understand and uphold Art. 2, Sec. 1, knowing the text was put in place to affirm and protect State sovereignty. More specifically that a large, high population State huge margin of victory could overwhelm other State(s) decisions for their locale. Allowing popular vote determination of the executive branch - esp. with a polarized figure more interested in specific interests over the general welfare (for example a champion of corporate welfare while claiming to care about the poor) would hasten/increase the probability of a State(s) exiting the coalition.

Understand it is foolish for anyone to dream that one day we’ll have a one for 30,000 (round-up) representative U.S. House where it is a part-time job which pays median income. If for no other reason than House members may actually realize what median income is each 2 year cycle. The ratio of one representative for every 700,000 to well over a million in some States will continue to get worse until this forced coalition finally fails. When this column may be reread long after my and this hegemonic union’s passing, I pray it will not be believed that this union of States was just another democracy which failed but considered yet another tyrannical oligarchy (also feared by the Greeks) so future generations may identify and defend against the evil of their day.

I ask forgiveness for an old man who was taught to read documents, know some history and make every effort to understand what one observes regardless of the rhetoric and nomenclatures used. I cannot bring myself to call what is happening on the exchanges [DJIA, NASDAQ, S&P 500] these past decades a market or say “Obamacare” choices are a marketplace, etc. when clearly results in a command economy. I know most will continue to waste their votes on authoritarians like Biden and Trump - esp. in a State like Alabama with some of the worst ballot-access laws in the nation. It cuts to the core hearing these authoritarians speak of Democracy while further destroying our well designed Republic, knowing our independence was lost long ago when coerced into a forced coalition.

In closing, I hope the overwhelming majority of authoritarians may at least tolerate the fading years of this old fool. Dr. Franklin’s “A republic if you can keep it,” response to the Philadelphia lady’s, “What have we got, a republic or monarchy?” query remains among my indelible memorized quotes I cannot erase. According to Bartleby and the Yale Book of Quotations this exchange was first printed in the American Historical Review [1906] publishing notes of Maryland Constitutional Convention delegate James McHenry who some know I know dear. I suspect some (like my former student Lance Farrar - no stranger to perjury and historical rewrites in our court system) will assure me authoritarians shall applaud my help in indentifying the more important quotes to erase/rewrite for their posterity.

Postscript: appreciate those prompting me to write on the next AU president circling to ‘Crash’ into Samford Hall ‘Leath-style’ recalling my https://www.alabamagazette.com/story/2017/04/01/opinion/installing-steven-crash-leath-as-aus-19th-president/1019.html column trying to avoid that disaster and $5 mil. hush money exit. We’ll see... perhaps the dwindling righteous at AU can make a stand against the Auburn mafia (you know, that treat you like family) and declare this a failed search. I forecast the usual suspects will install their anointed inside candidate; yet another Leath caliber public servant they can easily leverage to do their bidding - just as they found Crash appealing 5 years ago. Little has changed at AU... foolish to hope President Gogue will take out any more trash (corrupt Deans, etc.) before exiting this second time. Kudos to those who blocked the corrupt Provost from the presidency - easy to imagine the insider installation will be even worse... this IS Auburn.