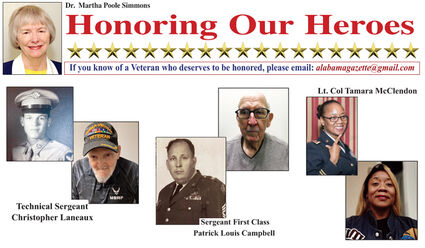 TSgt Laneaux was born July 24, 1932 in Kiln. MS, to his mother, Wilhelmenia Williams. He was reared in Bay St. Louis, MS, and graduated from Saint Rose de Lima High School in 1953. He volunteered for military service and enlisted in the U.S. Air Force June 12, 1950.

TSgt Laneaux completed Basic Training at Sheppard Air Force Base (A.F.B.) and completed the Supply System Management Course at Lowry A.F.B., CO. During the Korean War for two years, he was stationed at Eielson Air Force Base, AK, where the Air Defense Command deployed interceptors, which were used to monitor Soviet air power during the Cold War. His next assignment was at Suffolk County A.F.B., Long Island, N.Y. where he left military service June 11, 1954. He then reenlisted in the U.S. Air Force at Mitchell Air Force Base, Long Island, N.Y. He was next deployed to Naples, Italy, for four years, and then he served for one year at Sheppard A.F.B., TX with a missile training unit for operation of the Jupiter Missile, the first nuclear armed medium range ballistic missile. He returned to Italy to serve at the Italian Gloia del Colle Air Base where the U.S. Air Force’s 36th Strategic Interdiction Air Brigade trained the Italian Air Force in missile operations. He then transferred to Turkey near Izmir where the Turks were trained in operation of the Jupiter Missile. He returned to Sheppard A.F.B, TX, to Hurlbert Field, an Air Force installation in FL, to Eglin A.F.B., FL, and then to Brookley A.F.B., in Mobile, AL, followed by deployment in December 1965 to Ubon Royal Air Force Base in Thailand during the Vietnam War for one year and then deployment to Rhein Main Air Base in Germany in 1967-1969 for three years. TSgt Laneaux’s final assignment was at Maxwell A.F.B. where he retired from military service August 23, 1970.

After his military retirement, TSgt Laneaux worked 21 years for the State of Alabama in three departments. First, he worked as a salesman in the AL Beverage Control. Next, the served as a counselor with the AL Department of Youth Services at the Mount Megs Campus. He then worked with the AL Department of Corrections as a supply officer of equipment for each of Alabama’s prisons. Using the G.I. Bill while employed by the State of AL, he received a B.S. Degree in Sociology and Psychology and a Master’s Degree in Criminal Justice from Troy State University. TSgt Laneaux retired from all employment in 1990.

TSgt Laneaux and his wife, Janice Wesley Laneaux, have been married for 56 years. They met in Mobile when he was stationed at Brookley A.F.B., and they were married in Mobile in November 1965. He has three sons, one daughter, six grandchildren and four great-grandchildren. He is an active member of the City of St. Jude Catholic Church in Montgomery, AL. For four years, he served as a van driver for the Church providing transportation to services for people who otherwise would not have had transportation. He has been a member of the Knights of Peter Claver, the largest African American Catholic organization in the United States whose purpose is to render service to God and His Holy Church, render aid and assistance to the sick and disabled, and promote social and intellectual association among its members. He has held the positions of Deputy Grand Knight and Financial Secretary within this organization. He also drove and delivered Meals on Wheels for elderly with the Montgomery Council on Aging for two years. He enjoys fishing and rooting for the athletic teams of the University of Alabama.

TSgt Laneaux s’ reflections on his military service are, “Being in the military in the military service gave me opportunities to see places that I would not have able to see or even to imagine. Each country that I went to gave me knowledge of that particular country’s culture and people. I enjoyed it. I enjoyed each station, and I never had any bad experience. I am grateful for those opportunities. It gave me an education, and it gave me pride that I was able to serve my country.”

SFC Campbell was born August 17, 1937 to his parents, Gordon and Elsie Campbell, in St. Charles, MO. His father worked as a migrant laborer, and the family moved to many states including CA, CO, AR, TN, etc. His two brothers served in the U.S. Marine Corps retiring after successful military careers. At age 17 before finishing school, SFC Campbell enlisted in the U. S. Army in November 1954. He completed eight weeks of Basic Training and eight weeks of Infantry training at Ft. Jackson, SC, for service in the Infantry. SFC Campbell was deployed to peacetime forces in Korea with the 24th Infantry Division for 18 months. After that deployment, he was transferred to Ft. Riley, KS, for completion of his three years of enlistment in December 1957. He then reenlisted for six years, and for 13 weeks, he retrained to work in Explosive Ordinance at the U. S. Navy Propellant Factory and E.O.D. School at Indianhead, MD. He then served at Granite City Engineering Depot, Ill. He also served at Okinawa, Red River Army Depot, TX, Korea and Sandia Base, NM. SFC Campbell was deployed to Vietnam serving from April 1967 to June 1969 where he was wounded and received medals.

After his military retirement, SFC Campbell entered civil service and worked as a logistics specialist at Tinker Air Force Base, OK, and then he became a government contract specialist at Maxwell Air Force Base Gunter Annex retiring in 1995 at GS11. He has membership in the Vietnam Veterans of America, Disabled American Veterans and Veterans of Foreign Wars.

SFC Campbell is grateful for the education that he was able to receive during his military service. He received a GED while serving in Korea, a B.S. Degree in Business Administration from William Carey College in 1956 and a Master of Business Administration from Oklahoma City University in 1981. SFC Campbell reflects upon his military service saying, “It was an honorable life style that I enjoyed. It was a step ladder up for life. I entered the Army having completed only the sixth grade, and I left the service with a degree. I would like future generations to remember that I served with pride and honor.”

Lt. Col McClendon was born March 18, 1973 in Ft. Lauderdale, FL. Her adoptive parents were Nathaniel and Carolyn Powell. She was reared in Deerfield Beach, FL, where she graduated from Deerfield High School in 1991. She attended St. Augustine University, participated in Army R.O.T.C., graduated with a B.S. Degree in Communications and was commissioned as a 2nd Lieutenant in the U. S. Army May 12, 1995 by her father, Nathaniel Powell, and Ernestine Powell.

Lt. Col McClendon’s military career began with Basic Training at Ft. Knox, KY, with eight weeks of training followed by six months at Ft. Bragg, N.C. where she engaged as a trainer in basic soldier skills. Next, she went to Ft. Riley, KS, as the Chief in the Processing Center in Human Resources for two years. Her first overseas deployment was to the 2nd Infantry Division at Uijconybu, Korea, for 13 months followed by serving as Company Commander at Ft. Benning, GA for 24 months. She was sent to Ft. McCoy, WI, as Personnel Officer for 24 months. Next, she was assigned to Ft. McPherson, GA, serving as Exercise Planner and Simulation Officer for 24 months. Then she served at Ft. Bliss, TX, as Personnel Strength Manager for 24 months followed by assignment at Ft. Leavenworth, KS, for one year as a student of war strategy at the Army’s School of Advanced Military Studies. Next, she served at the Schofield Barracks, HI, in Human Resources with the 130th Engineer Brigade in the Joint Logistics Command for 1.5 years. Lt. Col McClendon’ second overseas deployment was to Afghanistan with the Human Resources Sustainment Command for one year. She returned to Hawaii to serve in Human Resources with the General Staff of the Pacific Command for 12 months at Ft. Shaffer. Lt. Col McClendon’s had two assignments at Ft. Bliss, TX, as the Personnel Officer with the 32nd Army Air Defense Command for 24 months followed by one year as the Sexual Harassment Assault Response Prevention Program Manager. Next, Lt. Col McClendon was sent to Shaw AFB, S.C., for two years at Chief of Staff writing policies for deployment to the Middle East. Lt. Col retired from military service at Ft. Jackson, S.C., January 7, 2017.

Lt. Col McClendon and her husband, Frank D. McClendon, have been married 13 years and have four children and one grandchild. He served as a U.S. Marine. They enjoy traveling. Having been a journalism major in college, she writes children’s book and poetry. She also works as an assistant at the Highway 80 Café in Lowndesboro, AL. They have a cattle farm, which they lease, and they have a fish pond where they enjoy fishing and which is used by veterans.

Lt. Col McClendon’s conclusions about her military service are: “I guess that being adopted, I did not feel that I belonged. When I entered the military, everybody dressed the same, looked the same, marched same and talked the same. We did things as a unit, and I believe teamwork was dreamwork. Having that esprit de corps brought out so much in me that I never missed family. I had something of which I was a part. When I went beyond my emotional needs, I looked at what we were doing for society. We were contributing by being model citizens, living a good, clean, healthy life, working out and being an ambassador to other people who were less fortunate. I was strengthened by being in the military. I was so overwhelmed by everything that I received, the training, the strategies, the operations, that now that I look at myself, all I want to do is to give back. I think that having a family helped me to balance and focus on the mission because of my family’s notes and e-mails encouraging me on down days especially during deployments and travel.”