What is the Real Price of Freedom? 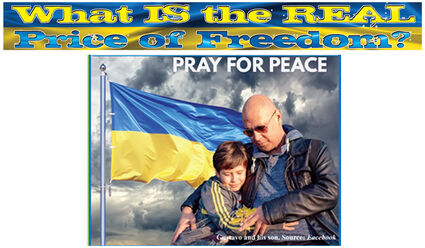 PART 1: A Face to the War on Ukraine – A Father Flees with his Family

On February 27, 2022, a citizen of Ukraine posted that he was safely at home in Odesa with his family, about 15 kilometers outside of the city, which is a seaport and the third most populated city in Ukraine.

This was three days after Russia invaded Ukraine.

That beautiful Sunday morning, he was fairly relaxed in his Facebook video, stating he felt that Odesa was still reasonably safe.

Although a curfew was in place from 8 p.m until 6 a.m, the men in his apartment building and those in the area had formed the equivalent of neighborhood watches. This was simply a precaution to make rounds and watch for any people loitering or any other suspicious activity.

Most of the essential businesses were open – something that was a temporary norm during the height of Covid – including government offices. Despite what might have been relayed in the media, pricing had not significantly changed and the supply change had not been interrupted. The banks did shut down, but only for a day. When they reopened, limits were placed on the amounts people could spend each week as many people were withdrawing monies and preparing to flee.

During this time, many of those attempting to cross the borders of Poland and Romania became stuck there. Others abandoned their vehicles in order to walk across the border. The roads were becoming congested and dangerous as civilians, understandably on edge, began reacting to the situation and preparing to protect themselves and their families from the Russian forces.

While reiterating that he felt safe at the time, this Ukrainian recognized that many other areas of his country were being hit hard. Again, he stressed that the City of Odesa was reasonably safe. Not a Ukrainian citizen by birth, Odesa was home to him. He had established a family there and made many friends. He had enough food and supplies for a month, and a car full of gas. At the time, still not comprehending that he might have to flee Ukraine.

Who is this man giving a first-hand report from overseas in a country invaded by Russia on Thursday, February 24, 2002? He is known as Gustavo – a well-known musician on the high seas and beloved by many. His profession is that of a piano bar entertainer in the cruise industry. He is just one face and one account of what is happening to the citizens of Ukraine. He is just one person in a city of more than a million and in a country of 41 million. But Gustavo is a real person. He is not media hype or a fictitious character. He is a man in fear of his life and that of his family.

On that beautiful Sunday morning, the piano man ended the video with hopes of peace talks, but he wasn’t naive and he was prepared.

Three days after that video and six days after Russia invaded Ukraine, on Wednesday afternoon, he began making plans to flee the country that had become his home and take his family to safety.

Please stop and pray for Gustavo and for the millions of others who choose to protect their family, for those who stay and fight, and for this situation to be resolved peacefully and quickly with minimum loss of life.

As of presstime, March 3, 2022, it has been reported that Russian troops have taken control of an area around the Zaporizhzhia plant in the southeartern Ukraine, the second biggest in Europe, containing six of the country’s 15 nuclear reactors.

Recent history of Ukraine can be traced to the mid-1650s when Poland and Lithuania entered into a shaky peace agreement with the Cossacks, Christians from Eastern Europe, seeking a democratic, self-governing community in the-then sparsely populated part of Eastern Europe.

In the Treaty of Perpetual Peace, 1686, Poland divested ownership of what is now Ukraine to the Russians, but not without almost perpetual disputes. The formal treaty was not ratified until 1710. After further partitions, between 1772-1795, Russia and Austria controlled and claimed all of the territories of what is now Ukraine for over 100 years.

After the Russian Revolution of 1917, Ukraine had a short-lived moment of revolutionary independence but the Russians again took control in 1919. At first, the Ukraine population retained its language and culture. However, by the mid-1930s the now named United Socialist Soviet Republic (USSR) had completed its Russification. When the famine (Holodomor) hit this region historians estimate 8-10 million people starved to death across the USSR, with 4-6 million being from Ukraine. The eventual leader of the USSR, Nikita Khrushchev came from Ukraine.

During WWI, Ukraine fought for and won its independence, though subsequently most of the repressive policies of the USSR were still present. The Ukraine became a charter member of the United Nations in 1945 which meant among other things that if one nation in the UN was attacked, all the members would come to its aid, including NATO’s military force.

The 1990s and 2000s proved harsh economic times for the Ukraine. After declining to participate in the European Union, mass protest broke out and a Revolution of Dignity was declared. The president was impeached, which lead to the first Russian-Ukrainian War in 2014. It concluded with an uneasy peace and Ukraine ceding Crimea to the Russians.  Then President Obama and VP Biden watched Putin take the Crimea and used the same ineffective sanction approach toward Russia with the same results.

Now they are at war again. But look back to 1991 when Ukraine held the third largest stockpile of nuclear weapons. President George H.W. Bush negotiated with other nuclear powers to dismantle these weapons for the cause of peace. Ukraine was given assurance from the West (1994), that should any harm come to them the West would come to their aid. (See: Strategic Arms Reduction Treaty, aka START and The Budapest Memorandum).

Per the agreements, Ukraine transferred its last nuclear warhead to Russia in 1996 and dismantled its last strategic nuclear delivery vehicle in 2001. While not defenseless, its ability to defend itself from surrounding powers was substantially and irrevocably degraded.

Over the last dozen or so years, President Vladimir Putin has flaunted the signatories of the above agreements, first with Crimea and now with the Ukraine. In the pre-dawn hours of February 27, 2022, Putin sent a chilling message that eviscerated all diplomatic attempts to stop Putin. Embargo, negations, and threats were of no use. He declared the Russians were under a constant threat from the modern Ukraine (slavic word for borderland, referencing Poland circa 1150 A.D.).

With the whole world looking on, Putin amassed 150,000 plus troops at strategic border points during this run up without any meaningful response from NATO nations, except from Germany, which tacitly and tersely sent 5,000 helmets to the Ukrainians on the same day as Putin's announcement to attack.

Putin served in KGB for 16 years. He has ordered opponents to be imprisoned or murdered. He is not crazy; he is cunning. He also seeks the glory that was once held by former Soviet dictators and wants to be in the pantheon of the Communist Soviet leaders.

Ukraine was one of the founding countries of the USSR. It has rich and complimentary mineral resources that can directly help the Russian economy.

Surprisingly, Russia's GDP ($1.4 trillion) is roughly equivalent to that of the state of Florida ($1.3 trillion). War is often an excuse leaders use when the economy is doing poorly. Half of Russia's GDP is tied to oil exports.

Russia controls the flow of oil to most the European countries. Interestingly, the current embargos do not include stopping Russian oil.

The U.S. imports over 200,000 barrels a day. The Biden sanctions do not include any disruption as of the time of this writing.

China is sitting on the sidelines, but only in appearance. It has been strongly suggested that it will provide as much funding as Russia needs in turn for its opportunity to attack and control Taiwan in the coming months if not weeks.

Banks around the world have ceased all transactions with Russia and the U.S., and others have seized Russian assets in affiliated banks. These actions seem to strengthen a tie between not only between Russia and China, but also Iran. China abstained from condemning Russia’s attacks in a UN resolution.

Oil prices have surged to over $110 a barrel at the time of this writing.

Reports out of Ukraine indicate war deaths of over 20,000 Ukraine soldiers and 5,000 civilians thus far, with predicted loss of life to be much higher. Some estimate in the hundreds of thousands, with those injured exceeding 100,000. Bombings continue across the country including key seaports. It is reported that between one and two million refugees will flood into neighboring countries.

Kyiv (pronounced Ki-ev not Keiv) is currently under siege with a 40-mile Russian convoy heading toward the capital city, approximately 20 miles from the city center.

The Ukraine has no air assault to speak of and none of the NATO forces have volunteered to attack this convoy or other key spots. The U.S. has deployed about 10,000 troops thus far, and has also given the Ukraine military Javelin missile weapon systems made in Troy, AL by Lockheed Martin.

One of the key criticisms of Putin was that the Ukraine was attempting to join the U.N. Security Council.

Germany and other countries are now beginning to attempt to send more sophisticated weapons, but not enough to stop the onslaught.

Gustavo's family was forced to seek refuge from Ukraine and is now in Romania. Read more here ... https://www.facebook.com/groups/gustavoukraineemergencyfund ......... IN NO WAY IS THE ALABAMA GAZETTE ENDORSING THIS FUNDRAISER, BUT WE HOPE THAT READERS ARE INTERESTED IN GUSTAVO'S CONTINUING SITUATION, SO I AM POSTING A LINK TO THE INFO ... THE ORGANIZER, DEBI METCALFE is a long-time personal friend so I know the funds will go to Gustavo if anyone chooses to donate. ~ Chelese Beck