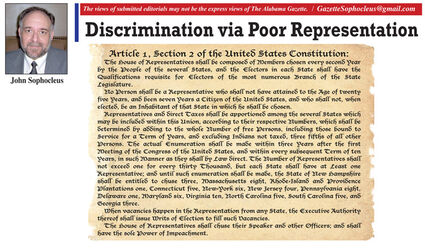 Once upon a time, I’ve been told, students were taught ‘taxation without representation’ as a trigger in our first war for independence. Sadly, it wasn’t something stressed in my government school approved education. Thankfully enough true teachers remained to direct me toward some of the more important clauses of our Declaration and Constitution. Some classmates may also cite old textbooks stored in the back of a high-school classroom where I’d try to hide (bored in trig class, desperate for reading) likely played a bigger role in my education.

Much ink has been spilled these past weeks about Alabama’s redistricting maps which are indeed an abomination to the most elementary math class and any Constitutionally correct basic civics class – i.e., NOT politically correct as taught today. Long time column readers have suffered my lone voice in the wilderness many times these past dozen plus years w.r.t. our Constitutional [Art. 1, Sec. 2] design for the HoR. Disheartening to observe how far we’ve ‘progressed’ since the 435 limit was imposed (1929) by DC oligarchs from the one representative for every 30,000 (round-up) rule well argued in the Constitutional Convention. As population increased this past century, we now have one representative for about 800,000. Well over a 25 fold reduction in real representation. 1929 was highly influenced by the progressive era, successfully redefining the lost cause of fighting for independence and sovereignty to hegemony and white supremacy. A very effective way to block progressives’ ‘undesirables’ from Congress, enhancing gains from hyper-gerrymandering, restrictive ballot access laws and reducing the number of representatives further concentrating DC oligarchs’ power.

Recap for past readers; I forecasted Alabama losing a US House seat in the 2020 census. Federal judges planned to use this reduction to six seats and get off the hook to ‘do right’ when one House member would be 17% (1/6) of the population instead of the current 14% (1/7) result. Somehow 17% would magically better match Alabama’s 27% Black population than 14%. Much to my surprise the forecast of one less congressperson did NOT come to fruition and this lame ‘get out of ruling free’ card didn’t evolve for our poorly educated federal jurists.

Now more than ever is the time for legislators and judges to restore ALL voters’ rights and allow more representation and candidates as designed by our wise founding fathers. Imagine the diversity if we started incrementally increasing toward approximately 140 US House members from Alabama to become what our Constitution envisioned. I’m weary of folks telling me their ‘feelings’ on what the number should be ... Washington weighed in when delegates suggested lowering the threshold down to 20,000* – some States did not yet have enough population for the 30,000 rule. This moved including text each State (as the sovereign unit) must have at least one representative, causing the unconstitutional 3 elector State tallies in presidential elections today under the 435 abomination. In short, until one exhibits the fortitude, visionary wisdom, integrity and intelligence of George Washington, I’m not going to listen to anyone’s feelings on what the number ought to be in their mind. Increasingly clear we do not have this sort of sagacity and conviction in our current politburo members claiming to care about ‘Democracy’ (yes, this is a flashback to last month’s column) and voters’ rights.

Eddie Burkhalter’s APR report [2/8/22] quoted AL State Rep. Chris England [D – Tuscaloosa and AL Democratic Party Chair] saying, “Today’s SCOTUS decision means that the canary in the coal mine just died. If there was ever a time for Congress to act on voting rights legislation, now would be it. Make no mistake, this is not a good outcome,” and “Tonight, we will feel the sorrow that comes from watching our forbearers’ hard-won work be wiped out with the stroke of a pen from the shadows.” I applaud Chair England sounding the alarm on this abomination. Perhaps an analogy of the already sick canary (not to be confused with the BCA Canaries raping our State) finally being murdered by the progressives in 1929 is a more apropos perspective.

Imagine how much ‘un-mined’ intelligence, talent and thought has remained buried by our incompetent (at best) federal judges these past several score. This is not the first time our forbearers’ hard work has been wiped out by the pen and/or the sword. Representative England was also quoted with, “But tomorrow is a new day with new possibilities. And we will fight, work and organize to regain and protect voting rights for Americans of all colors.” Amen Brother England – let’s make the House representative again! England’s words and passion reminded me of my favorite Coretta Scott King quote, “Freedom is never really won; you must fight and win it every generation.”

Congressperson Terri Sewell has been evoked in much of the redistricting debate. Her antipathy for civil rights (esp. for wrongful taking from Black landowners and others unable to defend themselves) is exactly what DC oligarchs want installed into their packed, unrepresentative, gerrymandered districts. Under constitutional districting it is much less likely the politburo could hyper-gerrymander a result to install her. Even so, a reduction from 1/7 to 1/140 power would correctly dilute her rhetoric, Ms. Sewell would require others in the Alabama delegation for support. Remember a Constitutionally correct HoR wouldn’t pass much federal legislation – reduced to issues more representative of the people. My Congressperson is similar, thankfully he is too incompetent/lazy to get much accomplished. There was a brief moment it appeared Congressperson Rogers found a spine donor, speaking out against big govt. Democrat Trump, but when it was more expedient to go with the duped… that fleeting moment of bravery quickly ended.

Congressman Mo Brooks may be the only Alabama Congressperson with math intellect and integrity to possibly shepherd us back to a more representative/Constitutional result. I appreciate Candidate Britt ads reminding me Brooks’ stand against big govt. Trumpism. Mo’s the most likely to return to sanity once Alabama finally rejects this current charlatan, but his rhetoric on the ruling shows he’s still wanting to be a part of the DC duopoly power concentration play. Similarly, the ACLU’s rhetoric is more support of the DC oligarchy; much like Congressperson Sewell, the ACLU record on basic civil rights like property has been horrific. Don’t expect them to champion making the House representative again to promote voters having more members to elect. Congressional redistricting maps have clearly violated Art. 1, Sec. 2 of our Constitution for well over a century and the ACLU has done nothing to fight this discrimination via decreased real representation.

Presidential and congressional elections all the way down to my corrupt Lee County commission Districts and Auburn City Council exhibit this growing discrimination via poor representation results from flawed redistricting. The Lee County arithmetic is as follows. Our last increase in District seats to the current five member result was set circa 1970 at 61,268 population – i.e., approximately one commissioner for every 12,000. County population had tripled from 1870 to 1970. Population has now almost tripled again this past half-century since 1970. With “current population at 166,314 and no change in number of districts, real representation has decayed to one commissioner for every 33,000 with much more to address than those few things States authorized to the federal government enumerated in Art. 1, Sec. 8. Sadly, the incompetent Lee County judge doing the redistricting droned on about how wonderful he was getting each District within a few person difference, instead of doing the hard work of keeping areas intact as directed with +/- 5% tolerance allowed. Perhaps when this incompetent is aged out, a more thinking judge will replace the political hacking we’ve observed these past decades.

The Lee County delegation would be well served to evoke the letter and Spirit of Art. 1, Sec. 2 of the US Constitution [the number of Representatives shall not exceed one for every thirty Thousand] to craft legislative text apropos to Lee County. Consider the following:

The number of Lee County Commission Districts shall not exceed one for every Twenty-five Thousand to be adjusted every decade after each federal census determination of Lee County population.

The threshold is worthy of serious contemplation, one for 30,000 would retain the five district result until 180,000 county population. One for 25,000 threshold currently requires one more district – i.e., total of six. Even numbers make tied votes more likely (maybe not with our current lock-step commissioners) but the existing rule is the chair [Probate Judge] casts the deciding vote as the US Vice President does over the 100 member US Senate. To think we will ever see one for 12,000 representation again (would be about 13 commissioners) is ‘swinging for the fences’ in my humble opinion since most are uneducated on how political power has concentrated in DC, Montgomery and Opelika.

Auburn City discrimination via poor representation outcome is just another iteration of the same abomination. 43% population growth with no increase in number of seats for voters to elect. Lee County NAACP Branch 5038 did a splendid job. The LDF’s attorney using a ‘barbell’ illustration from a past case of two populations connected by a hyper-gerrymandered sliver of a highway to connect them was perfect! Of course this was being done because the letter and Spirit of representation is dead... these two population centers would be two distinct voting districts with different candidates to elect in each race. The Auburn politburo proudly boasts how much over-subsidized, unsustainable growth they’ve accomplished this past decade; no discussion w.r.t. growing the number of city councilpersons to stop concentrating power to local oligarchs. The City could’ve easily added 3 more members to keep real representation a little more constant.

This is how discrimination via poor (unconstitutional) representation works nationally and at the State/local levels. A House unrepresentative cannot stand – how much longer do we have?

Postscript* in 1789 some States had not yet reached 30,000 so with each State allotted one House member regardless of population, at 20,000; one Representative. At 30,000; one Rep. At 59,999 still one Rep. At 60,000; two Representatives. State population at 89,999; still two Reps. At 90,000; three Reps. Y’all get the idea… because we do not follow Art. 1, Sec. 2 of the US Constitution we have US House members representing over 800,000! This also distorts the Electoral College (Art. 2, Sec. 1) driving the Bush v. Gore result, etc. The reason so many 3 electoral vote States are observed is because the number of Senators is more than their one House member which has not been allowed to increase as per the Constitution – i.e., a House which is NOT very representative.