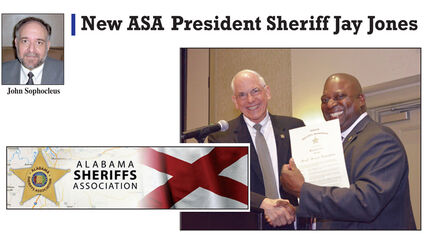 Longtime Alabama Gazette contributor Sheriff Derrick Cunningham’s service as President of the Alabama Sheriff’s Association (since January 2020) came to a close with installation of Sheriff Jay Jones last month. One can easily imagine Sheriff Cunningham, among the most respected Gazette supporters, was ready for a break after quickly walking into the Covid response quagmire. Perhaps Sheriff Cunningham could impose on Sheriff Jones to submit articles of interest at times as his succeeding President.

Some of the more notable quotes/text from Hannah Lester’s Observer [3-10-22] https://opelikaobserver.com/jay-jones-inducted-as-president-of-sheriffs-association/report on President Jones’ induction ceremony were giving credit to a mentor in the Lee County Sheriff’s Office, Major Carey Torbert. “When I first started at the sheriff’s office a couple of years ago, this fellow took me under his wing and he looked out for me,” Jones said. “… He has over 50 years association with the Lee County Sheriff’s Office, and I’m just telling y’all right now, that man’s probably forgotten more about how to run a jail, what a sheriff does in office, than most folks will ever learn in their lifetime. He’s a special man and a truly, truly good friend. Major I’ve said it, we’ve talked about, but I’m going to say it to the public right now, like I have before. I wouldn’t be where I’m at without you, sir.

“We’re sheriffs, No other position in law enforcement, but the provision of law and the insurance of public safety is as unique as the office of sheriff. We share the mission of protection of our communities with our law enforcement partners, our colleagues, and cities and states, and around our country. But none of them, I would offer for your consideration, share the exact same relationship that we do to those that we serve. We are here because it is their choice, those people that we serve. It’s not a panel, it’s not a commission, it’s not a council, but the vote of the citizens who we serve. No higher honor exists than to be hired directly by your neighbors, your friends and even people who have never met you, but they’ve heard you speak, they’ve talked to someone who does know you and decided, you know what, that you’re the one they want to be their sheriff. An honor indeed.”

Chris Taylor’s [3-13-22] Lee County Bulletin report https://www.leecountybulletin.com/post/lee-county-commission-failed-to-strip-citizens-of-their-rights] offered some different observations. Addressing the dynamics of pay raises, Taylor wrote, “The Sheriff’s appeal to adopt the resolution to limit the people's Constitutionally Protected rights has proven unsuccessful. But, his appeal seems to have been rewarded with a 25% raise from the county, not revealed until AFTER candidate qualifying closed which may have induced others to run had they known of the raise when deciding to run. Some recall this Sheriff’s prior 16% ‘out of cycle’ raise after espousing belief in Mike Hubbard, who was under indictment in the jurisdiction Jones held the highest law enforcement position.”

There are many things as a 30-year Lee County resident I would be Sheriff Jones’ entire tenor section lauding. Ones which most quickly come to mind demonstrating Jay’s exemplary leadership and problem solving skills – setting up a ‘satellite’ station to improve response times, starting the civil division to not waste deputies’ time and effort serving papers, etc. in a county experiencing over-subsidized growth. My readers with very good memories may recall I turned to Jay as a trusted source [https://www.alabamagazette.com/story/2018/05/01/news/alabama-sheriffs-lawsuit-outrage-v-issue/1364.html] on explaining the issues in the ‘inmate food money provision’ outrage. The analogy Jones provided to understand the history prior to the 30s in an era where Sheriffs were oft housed next to the jailhouse (evoking Mayberry days of Andy & Opie) where a wife or ‘Aunt Bee’ would cook for inmates was superb. It was fitting for a wife, Auntie, et al to keep the difference for their hard work/efforts to provide these meals. Obviously, the small town world of Mayberry no longer applies to many Alabama counties today … Sheriff Jones never condoned/supported the current result highlighted by Etowah County observations in my conversations with him. Jay seemed hopeful the legislature would quickly and sagaciously address the issue, which they did. From my vantage point, this was another issue where Jay took some leadership role to move things in the right direction.

This trait makes Jay effective at problem solving and devastating when wrongfully and ever so publicly professing Belief in Mike Hubbard while under indictment in his jurisdiction. While Jay never did as publicly apologize for his belief in Hubbard, he did show good sense and decorum to not show/speak before sentencing in Judge Walker’s court and join the sycophants who’d enabled Hubbard’s felonies pleading for leniency. We could’ve used Jay’s leadership (instead of enabling again) thwarting our most corrupt county com-missioner these past years – Jay has no worries about re-election, even if he angers/outs the corrupt. Taking the lead to offer law enforcement actions to reduce wrongful dumping in our trash sites instead of govt. mandated curbside pick-up awarded to an ACCA crony contractor would’ve been the Jay I recalled and admired. Taking the lead and requesting to be an agenda item w.r.t. equipment and monitoring cost for enforcing noise complaints and over-weight trucks to discouraging unscrupulous quarries, timber trucks, etc. would be the Sheriff Jones I could count on and admired.

In closing, I don’t know what Alabama Sheriff’s Association President Jones will be ... if more the pre-“I Believe in Mike Hubbard” Jay Jones, Alabama will have an outstanding President. If the more ACCA, BCA, et al alphabet soup agencies raping our State Jones, sadly the future becomes a little more bleak for the typical, productive Alabamian. Nonetheless, keep Jay in prayer and engage him when he does well and poorly; it is our duty as citizens. Duty is still something Jay appreciates. The fact we enable so many Felon Hubbard types is a reflection of us. Sadder still, it seems we have politicians who genuinely believe being elected in our rigged duopoly State says something more about their accomplishments than the flawed system.