Biden on a Mission to Destroy American Economy 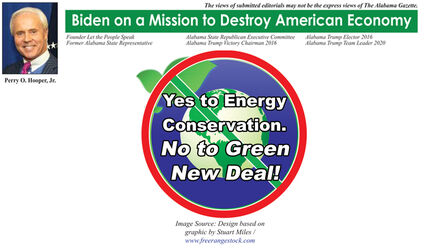 Joe Biden has shown his true colors. He has sold us out lock, stock and barrel to the most leftist fringe elements of the Democrat Party. He now worships at the altar of the Green New Deal. In his own words, “No more subsidies for the fossil fuel industry; no more drilling including offshoren; no ability for the oil industry to continue to drill period. It ends.” Under President Trump, we had regained our energy independence much to the chagrin of the global elites. When he took office, Biden’s first acts were to cancel the Keystone XL Pipeline and rejoining the Paris Climate accords assuring that America would no longer be energy independent for the first time since World War II.

His administration welcomes $10.00 gallon gas so everyday Americans can no longer afford to drive their car. He is ready to turn the country into an energy starved third world country all because of his crazy debunked climate change theories and his desire to be loved by global elites.

No matter what the crazies in the Biden Administration and the United Nations tell you, our capitalist society hasn’t embraced fossil fuels out of hatred of the planet. It’s the exact opposite. Fossil fuels are the foundation of economic growth and prosperity. Affordable, reliable, dependable sources of energy enable us to protect the environment while creating jobs and the goods and services we need. Expensive and unreliable energy, like the kind produced by wind and solar destroys jobs and harms the environment. Replacing our entire fleet of internal combustion engine cars and trucks is worse than an impossible pipe dream; it is pure insanity. Our current fleet generates its own energy efficiently. Electric vehicles need even more power generated for operation. They only store power in inefficient, environmentally dangerous batteries for their operation. This is a simple fact the left refuses to accept. No matter how many charging stations Biden builds, they all have to be connected to power plants.

Oil is a miracle fuel. Alex Epstein of the Center for Industrial Progress writes that it is “almost eerily engineered by natural processes, not just for cheapness, not just for reliability, not just for scalability, but also for another characteristic crucial to a functional civilization: portability.” It powers cars, trucks, and jets, without which the modern world as we know it wouldn’t exist.”

The Green New Deal has another big ally, Vladimir Putin. Evidence continues to mount that he is responsible for unaccountable millions in dark money (anonymous donations) to American and European non-governmental organizations. These organizations fund programs that discourage energy exploration, shuts down nuclear plants, and encourage the use of unreliable and expensive energy, such as solar panels and wind turbines whose utilization is propped up with taxpayer funded government subsidies.

Utilizing this strategy, Russian became the major supplier of natural gas to Europe while the green agenda shut down domestic European production. So, as Putin seeks to decapitate Ukraine, he knows that one source of income for his war machine remains the natural gas that our NATO allies such as Germany must have in order to survive.

Biden administration’s totally inept energy policies have played directly into Putin’s hands and our oil imports from Russia have filled his coffers.

Soaring energy prices are harming every American and killing the Democrats in the polls. Returning to energy independence by eliminating regulations, restarting the Keystone pipeline, drilling offshore and in Alaska does not fit their agenda. They could care less about creating good high-paying American jobs. Instead, they seek temporary increases in oil production from the worst despots in the world that they can reverse as they see fit.

They want to reinstate Obama’s horrible Iran nuclear deal that President Trump so wisely ended. Iran will be able to ramp up its state sponsored terror when they can legally get their oil back on the world market. They are going hat in hand to the Saudis and are begging them to produce more oil. These are the same Saudis who just barbarically executed 80 individuals without fair trials, the largest such executions in modern history.

Finally, they are making overtures to Venezuelan dictator Nicolas Maduro. Biden wants Maduro’s oil and does not care what happens to the people of Venezuela.

We must make it clear at the polls in November. We must return America back on the path to energy independence by returning the House and Senate to Republican control.