2022 Primary Retrospective: No Ad too Dumb for a Dumb Ad! 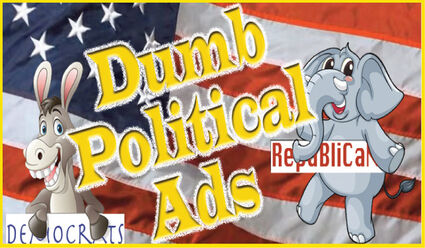 With all due respect to Gov. Ivey’s high-steppin’ through the bovine (dare I type BCA?) excrement, my beautiful bride took a sigh of relief as all the Dumb Ads disappeared Wednesday after the 5/24 primary. Still clueless what “No step too high for a high-stepper,” means, but it didn’t win my most Dumb Ad award. It was nonetheless a good political ‘weapon of mass distraction’ by this BCA incumbent’s handlers. More on that later…

In spite of challenger ads touting Kay’s snubbing of ‘Don and the MAGAts’ show, Ivey won the primary without a run-off. Too bad candidate James didn’t put together a coalition of small govt. conservatives instead of consorting with Bill Armistead and other Felon Hubbard types to more likely get this block of conservative voters’ support. No Ivey run-off may help small govt. candidates (non-ACCA, BCA, et al alphabet soup of political theft organisations in Alabama) who do not champion tax increases without votes, more command and control mandates, etc. Reduced propensity of big govt. voters to show for the June 21st runoff, now without worries of reinstalling BCA Kay, may help candidates like Allen, Brooks, et al to make the November general election ballot.

In Georgia, Kemp won big in spite of Trump’s endorsement of the opponent [Perdue] and Sect. Raffensperger (also maligned by MAGAt minions) won without a run-off suggesting the Trumpster fire is also burning itself out in our sister State to the east. It appears Trump’s MAGAt endorsement ceiling is losing altitude as what ‘Trump Republican’ actually means (a big govt. NY Democrat, now ‘donning’ the red jersey) becomes more ambiguous, beyond great fodder for Dumb Ads.

The Brooks comeback (polled down to 12% after Trump spoke out against Mo and yanked his endorsement when it became clear Brooks would not be the outright winner) after distancing himself from the Trumspter smoke and mirror show was something to behold. The more BCA Britt ran ads with “Cash-register” Shelby’s money showing Mo saying you can’t trust anything Trump says, the more Mo climbed to almost 30% and rising. Great job team Katie! Election night, candidate Durant [23%] asked his supporters to vote for Mo [29%] in the June 21st runoff.

Combined, 52% well exceeds Britt’s 45% primary result, but much comes down to who will show for an even LOWER runoff turnout ... if history is any guide.

As for Statewide primary turnout, it was only 23.4%. Poor sampling for a Statewide Amendment which I pray our legislators would have the integrity to only allow on general elections likely to have higher turnout – i.e., greater sampling to include more non-duopoly voters. In Lee County, still one of the hubs of corruption in our State where Felon Hubbard minions are alive and very active, turnout was only 16.9%. Easy to imagine as real representation has decayed, more eligible voters find little reason to vote between two inferior candidates in primary or general elections.

An illustration of this was the AL Senate Dist. 27 race between candidate Hovey and incumbent Sen. Whatley. The unofficial SoS tally has Hovey up by 4 votes with 88 (67 Lee Co., 14 Tallapoosa Co., 6 Russell Co. and one overseas military) provisional ballots to reconcile. As for the Dumb Ads theme, Whatley’s psychedelic liberal ad showing Hovey in a tie dye shirt was a last minute turning point to make fun of this Dumb Ad. Whatley had tried so hard to get along with the Felon Hubbard minions, esp. Hubbard’s anointed/installed replacement Rep. Lovvorn and bankers who subsidize most corrupt attorneys, board members, developers, politicians etc. in Lee County that voters (with good reason) saw this incumbent Senator as part of the problem. Sen. Whatley came a long way from leading the way to get rid of ‘public servant’ Lowder when first elected to more recently aiding and abetting AU President “Crash” Leath’s $5 mil. hush-money.

Sadly, it appears the Felon Hubbard machine will carry the day once again. Indeed Whatley is not a good fit, more of a ‘fly-over country’ good ole boy who just can’t bring himself to be another big hog at Lee County political sloppin’ trough. Time to adjust State Representative and Senator ranks to keep up with the over-subsidized/cancerous growth. Just notch out Auburn/Opelika to the northern Chambers County border to form a new county so those who want the Hubbard authoritarian result and Fuller’s Gig City type soviet debacles can be more contained to their own parasitism.

Whatley’s ‘psychedelic liberal’ was my runner-up for this primary cycle’s top Dumb Ad. The winner was the Debra Jones slobbering over Trump ad shooting a pistol target saying the liberals wouldn’t allow her to put a convict under the prison. The sad thing is Judge Jones was running a much better ad and she was the superior candidate to her BCA sycophant opponent. Jones appeared to be closing the gap and gaining momentum for the win until the Dumb Ad kicked in. I sometimes wonder who is giving political advice to sabotage some of our best candidates. Clearly some candidates, like Judge Tickal and Micah Messer can run outstanding campaigns in Lee County. Perhaps most notable is Candidate Tony Langley who has our most corrupt Lee County commissioner in a runoff, offering real hope to remove this 12-year political thief from our midst.

In closing, another duopoly party fundraiser has come to a close. Candidates pay to be put on primary ballots on the taxpayers’ purse. The moneys are not sent to the Alabama Treasury to help offset the cost of these primary elections taxpayers are NOT obliged to provide; we must provide general elections to insure our republican form of government guaranteed in our US Constitution. Worse still taxpayers pay for BOTH ballots, but can only give input on one of the duopoly party choices. Let parties pay for their own primaries, conventions, etc. to determine their own party candidates and charge uniform marginal cost for any candidate to be placed on general election ballots.

Postscript: Unofficial word from the Secretary of State is the Libertarian Party of Alabama [LPA] will be notified of ballot access for the November general election. If so, I’ve been drafted as the LPA’s US Senate candidate and will be reluctant/find it inappropriate to write further on this race in The Alabama Gazette if indeed a candidate. For over a dozen years it has been an honour and blessing to be a Gazette writer. It will be a delight to write more about economics, faith, etc. until November as a little respite from the unpleasantness likely to come these next five months if a candidate.