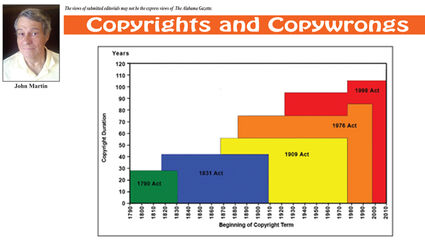 Editor’s note: This article discusses the copyright issues that the Alabama Gazette and other publishers might encounter that is very important, especially in today’s easy access to the world wide web. It is so simple to snag a picture here and there seemingly floating around on the internet. And everybody does it, so why not? It won’t hurt anyone, right? Well, it’s best to live by the old adage: “Just because you can, doesn’t mean you should.” In the case of copyright infringement, it is a situation where it is NOT better to ask forgiveness than permission as it can be costly. There are ways to obtain consent for use of information and images, and we always do our best to make sure we are in compliance. To go straight to the source, visit: https://copyright.gov/

People frequently hire lawyers to search the web and published material to specifically look for copyright violations. This can be rational when violations of well-known artists and writers are numerous enough to cause financial losses. But scammers can copyright ordinary photos, drawings, or whatever and publish them on web sites like Facebook and Instagram where millions of people post and share routine uncopyrighted material. The scammers intentionally give no hint of any copyright notices, wait for people to “violate” their “work,” and hire less than ethical lawyers to search for those who have taken their bait. When a lawyer spots a hit, he concocts a stiff fine—enough for his client and his own fee for the lengthy and boring job of searching and collecting.

Before 1989, the United States required copyright notices on all published materials to inform would be violators, and if such notices are not given, the copyright owners shall not be able to prosecute or collect any penalties. Any lawyers attempting to usurp it would be guilty of malpractice.

But in 1989, our copyright law adopted the Berne Convention Implementation Act, which rendered copyright notices optional. This opened the door for scammers and crooked lawyers to create “infringements” that generate heavy fines and penalties.

Copyright abuses like this must be ended. The current law makes it too easy for scammers to fleece innocent people with contrived violations. The mandate for notices must be restored to protect everybody from traps like this. Victims should notify law enforcement.

Several years ago, many restaurants and other places that routinely celebrate clients’ birthdays refused to use the classic tune “Happy Birthday to You” for fear of violating a dubious copyright, never mind that it is well over a century old, and if it ever had a legitimate copyright, it had long expired. Its authorship has been attributed to American sisters Patty and Mildred J. Hill in 1893, but whether they actually composed the tune is disputed. Early copies of the lyric contained no credits or copyright notices, but in 1935, the Summy Company registered a copyright and claimed Preston Ware Orem and Mrs. R. R. Forman as authors. In 1988, Warner / Chappell Music purchased the company for 25 million dollars and estimated the value of “Happy Birthday” at $5 million. Warner / Chappell collected licensing fees until 2015. Then a federal judge declared the copyright invalid and ordered a payback of $14 million.

“Happy Birthday to You” is now officially in the public domain.

There is no question our copyright laws need to be reformed and greatly simplified. For starters, the lengths of copyrights are far too long. Like patents, a copyright gives the creator exclusive rights to his work for a limited time. Then it becomes public domain. Like a patent, a copyright grants a temporary monopoly in exchange for it to later be available to everybody.

The length of copyrights could be different depending on the materials and the need for the public to have access to them. For works like music compositions, art, novels and other fiction, 40 years is ample for anybody. That should be the maximum for anything. That includes NO renewals. The one and only exception would be trademarks. They would be allowed to last for the life of the corporations.

Other works deserve shorter times. News stories, photos and videos—daily, weekly and monthly publications—are essential to be readily available to the public in a timely manner. Copyrights for these should be short—perhaps a year—certainly no more than five. Other nonfiction works can also have essential properties. Ten to 30 years might be right for most of these.

A special case could be made for software. Since it evolves and becomes obsolete very rapidly, lengthy copyrights are essentially useless anyway.

But they can be burdensome to people developing new software if it must incorporate portions of older versions. A good example was when Bill Gates bought the rights to DOS for pennies on the dollar and then monopolized it. Software copyrights should last NO MORE than ten years.

Another problem with ridiculous copyright time spans is potential censorship. They can be used to restrict all kinds of “politically incorrect” literature, photos, videos, sound recordings, art, and whatever else. Our founding fathers had a good reason to specify 28 years. That is ample time for any monopoly.

Another reform we need is to avoid treaties with other nations that demand unreasonable copyright laws in our country. Any items like this already in effect should be nullified ASAP.

The latest revision is the infamous “Sonny Bono Act,” bulldozed through Congress by (obviously) Congressman Sonny Bono in 1998. At this time, many Disney copyrights were about to expire, and the Disney empire colluded with Bono and the rest of Congress to push copyright limits beyond human life spans—all the way up to 105 years and retroactive all the way back to 1922 at 95 years. Disney has a reputation of clinging to its intellectual property with a vengeance upon anybody who even lightly treads onto it. It pulled out every stop to keep any of it from becoming public domain for a very long time.

A good example was when a mother asked a local monument maker in Montgomery to create a Mickey Mouse tombstone for her deceased little daughter. The CEO contacted the Disney people. They initially refused to allow it, stating that their property, including their characters, were protected by very strict copyright laws and that violations would not be tolerated. The mother told them that her daughter was very fond of everything Disney and that she really loved Mickey Mouse. After some lengthy discussion, Disney relented and allowed the monument company to make one—but only one—not any more—ever.

Back in the day, Walt Disney and his company were loved by everybody, especially children. It was family oriented for people of all ages. But in later years, after Walt’s death and spectacular growth, the company began getting greedy. In recent years, the prices for everything at Florida’s Disney World—admission, lodging, food, events, souvenirs, and everything else have skyrocketed well beyond affordability for many people.

Recently, Disney decided that it could dictate how children should be taught about sexual orientation between kindergarten and the third grade in primary school.

That was the last straw. Florida’s Governor, Ron DeSantis, announced that Disney’s generous package of corporate welfare, special districts, tax breaks, and other perks financed on the backs of the taxpayers will be coming to an end.

On April 22, 2022, DeSantis signed a bill to dissolve Disney World’s self-governing status in the state and eliminate Disney’s Reedy Creek Improvement District. He said, “You’re a corporation based in Burbank, California, and you’re gonna marshal your economic might to attack the parents of my state? We view that as a provocation, and we’re going to fight back against that.”

Disney’s special district is scheduled to be dissolved by June 1, 2023.

2. Happy Birthday to You, Wikipedia.