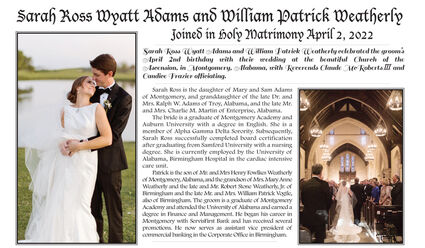 Sarah Ross is the daughter of Mary and Sam Adams of Montgomery, and granddaughter of the late Dr. and Mrs. Ralph W. Adams of Troy, Alabama, and the late Mr. and Mrs. Charlie M. Martin of Enterprise, Alabama.

The bride is a graduate of Montgomery Academy and Auburn University with a degree in English. She is a member of Alpha Gamma Delta Sorority. Subsequently, Sarah Ross successfully completed board certification after graduating from Samford University with a nursing degree. She is currently employed by the University of Alabama, Birmingham Hospital in the cardiac intensive care unit.

Patrick is the son of Mr. and Mrs Henry Fowlkes Weatherly of Montgomery, Alabama, and the grandson of Mrs. Mary Anne Weatherly and the late and Mr. Robert Stone Weatherly, Jr. of Birmingham and the late Mr. and Mrs. William Patrick Vogtle, also of Birmingham. The groom is a graduate of Montgomery Academy and attended the University of Alabama and earned a degree in Finance and Management. He began his career in Montgomery with ServisFirst Bank and has received several promotions. He now serves as assistant vice president of commercial banking in the Corporate Office in Birmingham.

Patrick and Sarah Ross knew each other in high school but their relationship blossomed as they renewed their friendship in Birmingham. The Weatherly’s invited Sarah Ross to join them for a 4th of July weekend last year in Cashiers, North Carolina. Unbeknownst to her, Patrick had asked her father for her hand in marriage weeks before the trip. The Weatherly’s surreptitiously invited the Adams to join them and watch as Patrick kneeled and proposed on the green at the High Hamptons.

Following the rehearsal at the Ascension, the wedding party, family members and close friends proceeded downstairs to a magical setting in the outdoor Waldo Garden Courtyard, which Chef Eric Rivera and the Vintage Year / Ravello staff had converted into a scene right out of Northern Italy. Clint Darby and his acoustic guitar serenaded the gathering under the delightful spring evening stars. From there, all entered the Ascension Hall where the Italian motif was continued, led by Foy McGowin and a host of assistants.

The dinner that followed consisted of a sumptuous menu, including fresh pasta with red wine sauce, chicken Saltimbocca and Patrick’s favorite – New York style cheesecake. Ali Bean’s looping slideshow shared the couple’s many happy childhood, and beyond, memories. Some of the out-of-town guests included Borden and Lucy Burr, Bobby Weatherly, Sid Weatherly, Virginia Johnston, Mary Frances Smyth, Stacy Coats Randle, Alan Stewart, John and Angie Martin, Justin and Elizabeth Jordan, Sidney and Charlene Ross, Deloris Ross, Houston and Melissa Johnson, Brooks and Brenda Knapp. After dinner, the room was filled with toasts to the bride and groom, most of which were full of great memories and laughter. The father of the groom concluded by making a special, warm-hearted toast, wishing the happy couple all the best in their days ahead, to which all raised their glasses with a hearty cheer.

On the day of the wedding, outside of the church, gracing either side of its entrance, flowed beautiful floral arrangements of white roses and hydrangea and laced with Kelly green hydrangea and sprigs of spiral eucalyptus. Inside, the altar, too, was adorned with a beautiful arrangement by Foy McGowin, who was graciously assisted by Pat Dunn and Jessica Copeland. Ascension members

Debbie Hackett and Nan Hobbs expertly directed and assisted the wedding party. Angel Davis was outstanding as the overall wedding planner for the couple, especially during those last hectic days before the wedding.

The bride wore a Romona Keveza gown featuring a bateau neckline and a fluted skirt made of silk shantung taffeta. Its lovely folds and pleats created a soft yet stunning sculptured presence. The bride’s waist was accented with a hand appliquéd Alencon lace detailing with a custom made Watteau bow train.

She wore an elegant cathedral veil with blusher. Ivory & White of Mountain Brook proved invaluable in the selection process and fitting. The bride complemented the dress with a sparkling necklace designed by Tiffany, which draped effortlessly around the bride’s neck. The bejeweled piece held special significance for the groom’s family. It had been purchased by the groom’s grandfather, Robert Weatherly, Jr., from Wartski’s of London many years ago. It has been worn in the past by several generations of brides in celebration of the marriage sacrament. Similarly, the bride’s family has a tradition of a sixpence presentation prior to the wedding vows. The bride’s father placed a silver sixpence in the bride’s shoe. The coin, struck in 1594 during the reign of Elizabeth I, symbolizes an old British tradition that guarantees good health, wealth and prosperity of every kind.

Flower girls, Virginia Manning Johnston and Elizabeth Weatherly Smyth, adroitly tossed soft rose petals to and fro as they made their way to wedding party, while Philippa Motley Morehead Dobson delightfully conversed with guests as she made her way forward. The ring bearer, George Ramsey Sprinkle, carried the most important items of the day with confidence and cheer.

The service was complemented with the resplendent voices of the Ascension choir and the music of organist Rebecca Barrinaeu Taylor. After the vows and rings were exchanged, the father of the groom approached the altar to serve as a signatory witness in his official capacity to solemnize the marriage. As the wedding party recessed, the ushers announced the matrimonial union with the ringing of the Ascension bells.

The Montgomery Museum and Fine Arts, under the supervision of Special Event Coordinator Aaron Gainey, served as the perfect reception venue. With a beautiful sunset shimmering across the swan-filled lake, guests entered the museum under a 12-foot-tall floral arbor that spanned the front doorway comprised of southern smilax, magnolia and elaeagnus greenery along with classic blooms of white and blue hydrangea, garden roses, lisianthus and blue delphinium. The Vintage Year provided sumptuous options throughout the evening. The bride’s cake was a traditional Italian cream cake by Cake Designs, topped with roses. The groom’s much coveted Peggy McKinney peanut butter fudge cake was comprised of small rounds of cake nestled among a miniature garden of blooms.

The renowned Sculpture Garden created a truly enchanting setting where guests relaxed under the stars at tables dressed with more flowers, along with a canopy of fairy lights glistening in the candlelight. The reflecting pool provided a stunning backdrop for the wedding cakes. The adjacent patio held a number of special attractions including a very popular throwback photo booth and a surprise visit by the groom’s favorite, Biscuit’s baseball team’s “Big Mo.” The mascot shook hands and posed for pictures with adoring children and adults. Champagne and other libations freely flowed through the night as revelers rocked with the Five Star Funk Lounge Band from Atlanta.

The beautifully cool night concluded as the newlyweds left the museum with their loving friends and family showering them with silver streamers. The two ascended into the convertible Bentley provided by Mike and Jenny Lynn Henig. After a restful night at the Renaissance Hotel and a morning brunch for the wedding party, the lovely couple departed for a wonderful honeymoon trip to Paris and Cannes, France. Upon their return, the newlyweds will reside in Crestline community of Birmingham.