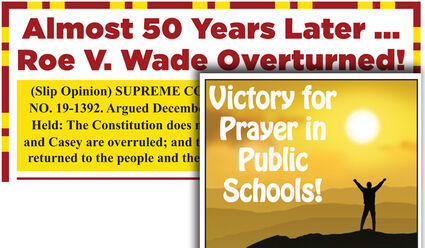 Held: The Constitution does not confer a right to abortion; Roe and Casey are overruled; and the authority to regulate abortion is returned to the people and their elected representatives. Pp 8-79.

Almost fifty years after the Supreme Court created a ‘constitutional right’ to abortion in Roe v. Wade, a majority of Justices corrected the erroneous decision stating, “Roe and Casey must be overruled.” The majority decision in Dobbs v. Jackson Women’s Health Organization declares, “The Constitution makes no reference to abortion, and no such right is implicitly protected by any constitutional provision.”...

... More than 1.5 billion lives have been lost to abortion since Roe

Justice Samuel Alito stated in the majority opinion, “Roe was egregiously wrong from the start. Its reasoning was exceptionally weak, and the decision has had damaging consequences. And far from bringing about a national settlement of the abortion issue, Roe and Casey have enflamed debate and deepened division. It is time to heed the Constitution and return the issue of abortion to the people’s elected representatives. ‘The permissibility of abortion, and the limitations, upon it, are to be resolved like most important questions in our democracy: by citizens trying to persuade one another and then voting.’[quoting Justice Scalia from the Casey decision.]. That is what the Constitution and the rule of law demand.”

Visit the link above for Q and A regarding this ruling.

Victory for Prayer in Public Schools!

Over the course of many years, the U.S. government clearly made decisions that infringed upon certain religious rights in a purported effort to separate church and state. In doing so, it paved the way for public entities to do the same.

On June 27, 2022, a Supreme Court ruling was the highest court in the land saying, in essence, the government had previously overreached, and it was wrong to restrict the abilities of school leaders when praying publicly at sporting events.

The ruling was passed in a 6-3 victory, and it was the result of action brought about by Coach Joseph Kennedy after the Bremerton School District (Washington state) prohibited him from praying public during sporting events.

Justice Neil Gorsuch affirmed in the majority opinion: “Both the Free Exercise and Free Speech Clauses of the First Amendment protect expressions like Mr. Kennedy’s. Nor does a proper understanding of the Amendment’s Establishment Clause require the government to single out private religious speech for special disfavor. The Constitution and the best of our traditions counsel mutual respect and tolerance, not censorship and suppression, for religious and nonreligious views alike.”

This opinion supported Mr. Kennedy’s claim that in praying at public events, he is merely expressing his religious convictions and did not do so with the intent to impress those on others ~ a definite victory!