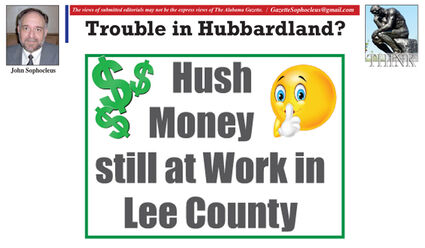 More rumblings in ‘low turnout’ Lee County as voters try to reject Hubbardland, the epicenter of corruption in our State. Although in prison and well paid with back door hush money via the Auburn mafia/Yellagrubber coconspirators [www.alabamagazette.com/story/2019/10/01/opinion/the-au-horror-picture-show-bride-of-felonstein-meets-yellagrubbear/1750.html] Felon Hubbard still calls the shots. Reading Mike’s ‘code’ from prison dialog transcripts leaves little doubt. The Hubbard Boulevard visual may be removed from the ugliest pillage on the plains, but the road to perdition paved by the ‘I Believe in Mike Hubbard’ freebooters keeps steamrolling along…

Montgomery made it clear to political prostitutes it was open season on taxpayers when espousing their Republocrat rhetoric following the 14% special election turnout result (49 days before a general election) to rob $437 million from our ETF. At least that 2012 sham result was accompanied by an election politburo members could spin as, “a great show of support from the people.” Of course they wouldn’t let the people decide a few weeks later in a general election where greater voter participation forecasted an outcome which would block these political thieves. Similarly, the Republocrat super-majority wouldn’t put a gas tax vote on any Statewide general election ballot.

There’s some evidence Hubbard’s “Stealing the Statehouse” playbook is finally meeting some resistance in Lee County, awaiting Felon Hubbard’s return to ‘Lago’ in true High Plains Grifter fashion gnawing away at souls and quality of life in East Alabama. Don’t expect productive citizens to continue applauding political thieves’ abilities and lack of scruples to steal candy from a baby as some sort of ‘artful dodger’ event. Reportedly 25% of the passed gas tax revenue would go to counties. In Lee County (epicenter of corrupt administrators, board members, commissioners, et al) it set off a feeding frenzy to enable more malfeasance and cancerous growth. The ‘gentlemen agreement’ to not pay for timber loads in excess of the 88,000 lb. limit had been effective. Great incentive to NOT overload since it won’t generate any greater payment for the timber. As morals and decency decayed these past years, inferior gentlemen displayed how cheaply souls are sold for ill-gotten gains; the incidence of overloaded trucks increased along with shady quarry deals and silencing citizen input, etc.

Economists (esp. traditional libertarians, not Ziegler apostles) champion user fees. In short, those who are doing the damage and generating increased costs pay to build/maintain/repair the damage done instead of being subsidized by others. With this tax, those often least able to bear the tax burden disproportionately pay the recently passed gas tax increase. Gasoline (like alcohol, beer, cigs. etc.) has a more inelastic (i.e., less responsive) demand curve so producers do not lobby against it… easier to simply pass most of the tax increase onto consumers.

As an aside, taxes on clothing, food, etc. with more elastic demand curves/competitive markets make it more difficult to pass taxes onto consumers – esp. lowest income consumers who more often aren’t directly purchasing food via SNAP/EBT payments. When an incompetent or corrupt ‘public servant’ (doesn’t matter, the result is the same) champions removing taxes on these items one expects to see “Judas rhetoric” in overdrive; assert caring for the poor to cloak the avarice of those lobbying to avoid paying taxes they mostly bear.

Does any rational person think removing the 4% State sales tax on groceries will result in consumer grocery bills in fact decreasing 4%? They will go down a little, but I assure readers the suppliers lobbying to remove the tax are NOT doing so to give the portion of the tax they pay to consumers instead of transferring to the Alabama Dept. of Revenue. When I get enough reader interest about this I’ll devote a future column to who bears a tax (consumers v. producers) and the “Calculus of Consent” in economics.

Back to the more local realities. The first corrupt Lee County commissioner to go (recently) was Sheila Eckman, most adamant of the county politburo refusing to accept two prior general election votes against taking more from unincorporated areas, shamelessly shrilling about letting the citizens decide and saying the issue got lost and voters were confused when soundly defeating it twice. It doesn’t really matter if too poorly educated to understand how foolish this public servant sounds or she doesn’t understand arithmetic or genuinely believes a sham special election result was ‘letting the citizens decide’ in her mind, the deleterious result was the same.

Easy to get big govt. extremist out for victory to transfer power and wealth in their favor instead of another reasonable sample of general election voters who may again stop this sort of abuse/manipulation of outcomes. How many of the 95% of registered voters who did NOT show even KNEW about that special election vote? All is ‘fair’ to advance their god of bigger govt. and promote their cronies, nonetheless this abusive manipulation of the electorate from the Felon Hubbard playbook may be attenuating. The candidate Lee County Watchers supported [Cannon] to replace Eckman started out well, but quickly followed the leadership of the most corrupt commissioner [Ham] recently removed in the June 21st runoff. Sadly, Commissioner Cannon will be one to remove next election cycle ‘if these shadows go unaltered’ as Dickens penned.

It was hopeful to see the most corrupt Lee Co. commissioner go down about two to one in another low [7.3%] turnout result suggesting more are becoming aware and taking out some of the Auburn Mafia/Felon Hubbard/Gig City Fuller political trash. Sending additional tens of millions in ATRIP dollars to a county which holds a special election to pass a tax for parks & recreation (clearly not wanted by the more representative general election voters) instead of improving their roads exacerbates the observed cancerous growth these past years. Worse still, County Access Management Policies and Subdivision Regulations prescribe one thing, but County officials spend tax dollars to circumvent the rules/policies. Little surprise given 3 of 5 commissioners are developers, they do not want to bear the costs of their business activities.

When the County obtains a developer’s performance bond to guarantee improvements on a road, the policy triggers a listing of the improvements and estimate; neither were provided by corrupt County officials. The Engineer is required to certify compliance with this County policy – he has not. Before connecting, it is required to comply with ALDoT’s “County Road Design” – it does not. When exceeding 100 VPD (Vehicles Per Day) improvements are required; no improvements were made. The unlawful Engineer (not bonded as required) used his ‘discretion’ to redirect county tax dollars to impose his own flawed traffic study. The Engineer’s discretion (commissioners very publicly stand behind) conveniently forecasts just below VPD requirements to release bonds so developers do not pay for the increased demand/use they put on county infrastructure where every actual VPD count revealed how poor this 'public servant’s' discretion has been.

Now, this corrupt County commission claims they don’t have the money and must address higher priorities. Well, they HAD money. They instead subsidize developers spreading this unsustainable cancer in Lee county to now beggar money from Goat Hill to further cover-up their corruption, incompetence and systematically harming those (mostly poor rural motorists and black churches in the County) least able fight this cancer and corruption. To add insult to injury our most corrupt commissioner championed 2 foot narrower roads ‘to make us more safe’ and not one commissioner had the courage to stand up against this bullying political thief’s nonsense.

Similar lack of oversight issues with Hospital Board members, BCBS fraud, no billing transparency and other insurance fraud with this corrupt commissioner has overflowed these past years.

Felon Hubbard minion and Auburn mafia devotee, Mr. ‘Gig City’ Fuller took a hit when his corrupt incumbent candidate [LaGrand] was taken out in the May 2022 primary. LaGrand was not as big an enabler of leader Ham’s corruption as Commissioner Long, but voters clearly had enough of his not making a stand against misleading Beat 13 to adopt Ham’s ‘Masterplan/Agenda 21 zoning to stop a quarry after admitting the planning commission did not have that authority. LaGrand would not address bonding requirements for quarries nor keep simple promises like submitting resolutions for long time honoured press, specifically Fred Woods (who faithfully covered commission meetings) upon his passing last year.

LaGrand’s arrogant doubling down on even more ‘progressive’ big govt. programs like mandating/monopolizing curbside trash pick-up also didn’t bode well with the black community who witnessed one of their promising, successful young entrepreneurs destroyed to transfer wealth to yet another Ham, ACCA approved crony contractor. Watchers begged LaGrand to request looking into cost of enforcing the 30% to 40% wrongful dumping into county dumpsters and failure to address ARPA fund allocations to mostly black churches and did nothing. It seemed more important to support Ham’s corruption and ‘business relationships’ with trucks to pick-up bulk trash, citizens were told would be Arrow’s (the crony monopoly contractor) responsibility, yet never allowed to see bids/contracts.

In closing, the best thing about ‘Gig City’ Fuller’s corrupt commissioner going down, is that many who were being asked to vote for the Auburn mafia’s State Senate Candidate [Hovey] didn’t do so because it was more important to remove corrupt commissioner LaGrand. Otherwise, Hovey would’ve won by a margin of hundreds more votes. It will be interesting to see what the Alabama Republican Party decides in Birmingham June 25th. It’ll reveal if the State Party supports the local Felon Hubbard kleptocrat minions and install Hovey, or take the heat of siding with incumbent Senator Whatley who’s campaign advisors ran an awful campaign, spending ridiculous amounts of money to make this Senator look foolish. If Whatley carries the day, I pray he’s learned not to listen to these ‘Dumb Ad’ salesmen and will stop schmoozing with Auburn mafia Lovvorn types and Will Ainsworth political thieves which folks witnessed sucking up to Felon Hubbard at Whatley events just before Mike’s long delayed trip to prison. I relished the possibility Auburn mafia/coconspirators couldn’t come up with enough ‘back door’ hush money to keep Felon Hubbard quiet and rat out some of the worst political parasites in our State.