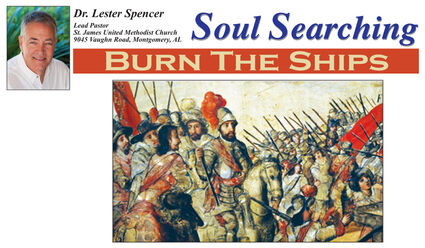 When I was in seminary I served as the Volunteers in Mission Coordinator for all the United Methodist volunteer mission teams that came to serve with the Methodist Church of Mexico. I served directly under Methodist Bishop Alejandro Ruiz who was the Bishop of the Central Conference of the Methodist Church of Mexico. My territory included all of central and southern Mexico so I traveled with teams extensively in this region of this beautiful country.

On one my journeys I went to visit the coastal town of Veracruz on the Gulf of Mexico. While there I learned the whole story of Hernando Cortes, a conquistador of Spain, who gave Veracruz it’s name. Cortez, under the sponsorship of Cuba’s Governor Velasquez, led an expedition to Mexico in an effort to defeat the Aztec Indian Empire in 1519. By early 16th century the Aztec Empire was huge with 6 million people and 500 small states in Mexico. It was a vast and successful culture with cities, pyramids, temples, farms and thriving businesses.

Cortez and his men had committed to the goal of surrounding Tenochtitlan, the capital of the Aztecs, lay siege to it and then conquer the Empire for Spain. When Cortez sailed to Mexico he had only 500 soldiers and 100 sailors plus 16 horses. Cortez soldiers were greatly outnumbered by the Aztecs some say as much as 10,000 to one. And the soldiers knew it. The men grew very fearful, and there was talk of mutiny against Cortez and then returning home on their ships to Cuba or Spain. Plus, they were also being eaten up by mosquitoes and running short on supplies.

Cortez heard of the mutinous talk and during the night had all of the ships emptied and burned so there would be no escape and no mutiny. The men were forced to march forward towards their goal of conquering the Aztecs and claiming the land of Mexico for Spain. The rest is history as they say. Cortez and his men did conquer the Aztecs and take over the empire and all of Mexico. Cortez was committed to the cause, and he did what was necessary to accomplish the goal.

Several take always about commitment from Cortez and his conquests:

A. Commitment is usually discovered in the midst of adversity. People don’t really know they are committed to something until they face adversity. As NFL Hall of Fame Football coach Vince Lombardi use to say,”The harder you work, the harder it is to surrender.” Committed people do not surrender easily. Cortez faced incredible adversity and was seriously outnumbered. And that is when his commitment was solidified, and he burned the ships! No turning back now.

B. Commitment does not depend on gifts or abilities. I have known many very talented people who have squandered their potential because they wouldn’t do anything. I have know other people not near as talented or smart who have been incredibly successful because of their strong level of commitment to their cause. Personally, I am not sure how smart it was to sail to Mexico with only 500 soldiers to face a population of 6 million Aztecs. But he found a way to reach his goal, because he was committed.

C. Commitment comes as the result of choices we make. Way too many folks think that conditions determine choices. But more often, choices determine conditions. Choose commitment and you give yourself a chance at success. Cortez faced tough conditions, but he made the choice to commit.

D. Commitment last when it is based on values. Anytime you make choices based on solid life values, then you are in a better position to sustain your level of commitment. A commitment to something you truly believe in is a commitment that is easier to keep. Right? Cortez believed in his goal and nothing was going to deter him.

How important is commitment to you?

Are you someone who values loyalty?

When you face adversity does it make you work harder or want to give up and quit?

Do you see yourself as very gifted or smart? Some people are book smart and some people are street smart. Both can be very advantageous! Do you think you can be successful by being committed and successful regardless of your IQ, grades, degrees or test results?

What are the values that fuel your commitment to your goals?

What choices do you need to make right now that will affect your commitment to your goals?

Whatever is tempting you not to reach your goals in life is like a ship anchored in the harbor calling you to take the easy way back to mediocrity.

I say burn those ships and commit yourself to move forward no matter what the odds may be!

Praying for you as you burn those ships today!