The Demise of the Butterflies 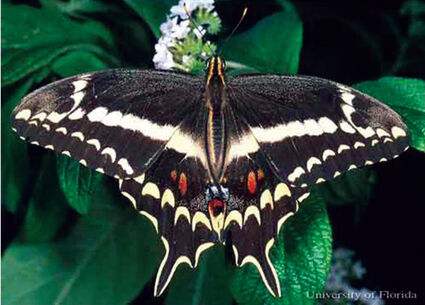 What has happened to our butterflies? Have many people even bothered to notice? On a typical summer day, how many do you see?

Up until about 1980, anybody could step outside in most places and spot a dozen or more in a few minutes. Since then, gradually at first, their numbers have diminished, and the decline has continued every year. When we passed Y2K, it began to accelerate. Finally, in mid-summer 2021, the remaining 10% of our butterflies suddenly almost completely disappeared, even in rural locations. Today, one can expect to see no more than one or two in an entire week. All species of butterflies have now declined by estimates of up to 99.9%, at least in the southeast U. S.

Like canaries in coal mines, butterflies are a little-known barometer that can reveal the overall health of our environment. Their numbers and diversity are critical to verify its status.

What is killing the butterflies? Various sources are claiming habitat destruction, deforestation, hurricanes, droughts, predation by birds, lizards and spiders, pesticides, loss of food plants, and of course, "climate change." Some of these are legitimate, but the primary source of butterfly losses has been given little attention-MOSQUITO SPRAYING. In cities, it has been sprayed from trucks for many years. Today, it is sprayed all over entire states from aircraft, where it spreads indiscriminately for many miles. There is hardly a spot east of the Mississippi River that is spared from its deadly fumes.

In late August, 2020, a swarm of thousands of monarchs migrating south from Canada flew over the Fargo–Moorhead area of North Dakota and Minnesota on their way to their wintering grounds in central Mexico. It was a journey of up to 3000 miles they had been doing for millennia, but that year they did not make it. They had run into a deadly cloud of permethrin and perished on the spot, literally falling out of the sky like confetti. Dead monarchs were scattered all over the ground. The insidious mist had been sprayed from a plane by an aerial sprayer hired by the Cass County Vector Control that was attempting to kill mosquitoes in the area.

Since before humans even existed, millions of monarchs lived in North America and performed their legendary migrations from the arctic regions to what is now mid-Mexico. Now, like the Passenger Pigeons, their numbers have plummeted so far that during this past July, 2022, the International Union for the Conservation of Nature (IUCN) has officially listed the monarch as an endangered species.

Southern Florida is probably the mosquito capital of the United States. It is also the home of several threatened butterfly species, including the Atala, Florida Leafwing, Miami Blue, Bartram's Hairstreak, and the iconic Schaus Swallowtail. In 1972, Monroe County began using aircraft to spray two deadly chemicals-Dibrom and Baytex-all over southern Florida. These chemicals are particularly potent to Lepidoptera, not to mention other beneficial insects. And Monroe County is right in the heart of the Everglades National Park, which is claimed to be a no spray zone.

Dibrom and Naled (essentially identical and deadly) are still sprayed from trucks and aircraft in Florida and other states, wiping out the butterflies and other beneficial insects wholesale. A few manage to survive on remote offshore islands beyond the reach of the deadly mist.

In June 2012, on the season's first mosquito control flight, Richard Howe flew a UH-1 Huey helicopter over Palm Beach County, Florida, spraying tons of Dibrom14 insecticide over thousands of acres. The patented sprayer was his own design to minimize the droplet sizes, enabling them to more efficiently disperse many miles from his altitude of 300 feet.

What can we do to stop this relentless destruction of our beneficial insects? Today, everybody should know that they are essential components of our world and that their loss can have catastrophic consequences.

Who do we blame? Careless homeowners, farmers and pest control companies have some impact. But the devastating destruction is done by federal, state, and local governments. These are the agents who use aircraft to spew the deadly vapors over millions of square miles of everybody's property-who destroy our entire insect populations to control a few pests. Our pollinators are being wiped out.

Almost no insects are spared. Besides butterflies, victims include moths, honeybees, ladybugs, cicadas, fireflies, June beetles, and just about all others-including mosquito predators like dragonflies and damselflies. The only survivors seem to be the nasty ones like fire ants, ticks, fleas, chiggers, bedbugs, roaches, termites, blood-sucking flies, and yellow jackets.

The news media are finally beginning to take notice. They have been aware of this problem for many years, but most of the news articles still use comments like "may kill" instead of definitely "will kill."

Older people remember the widespread use of DDT from World War II until 1972, when it was banned. Its toxicity was horrific for numerous insects and animals. However, butterfly populations in most areas were thriving. Obviously, the DDT was dispersed in limited areas. Today's insecticides are far deadlier. They are saturation broadcast over entire states with insect death tolls approaching 100%.

The European Union has been studying the effects of imidacloprid, the most widely used type of insecticide in the world. It has banned it for two years pending an analysis of honeybee populations.

There is some hope for safe and effective mosquito control. Mosquito larvicides are available, and they are not harmful to butterflies, bees, and other pollinators.

In April, 2006, Alachua County, FL treated more than 200 retention ponds with a mosquito-killing bacteria. Each treatment lasts for a month. Bacillus thuringiensis israelensis, or Bti, is a natural bacterium that kills mosquito larvae when they hatch. A good, safe mosquito trap in a yard or patio can be a five gallon bucket filled with water and a bit of straw laced with the bacillus.

Instead of a lawn, establishing a wildlife garden is also effective. Stock it with native plants and wildflowers that have NOT been treated with any pesticide, especially imidicloprid. Mosquito predators like hummingbirds, bats, frogs, geckos, dragonflies, damselflies, and many others will come to feast on your blood-sucking tormentors.

Another promising control agent could be elephant mosquitoes (Toxorhynchites splendens and Tx. rutilus) that do not drink blood, but instead kill the ones that do. They are huge compared to other mosquitoes-length18 mm (0.71 in) and wingspan 24 mm (0.94 in) and live on nectar, honeydew, and sap. Their larvae prey on the larvae of other mosquitoes and are particularly fond of Aedes aegypti. A single larva can live up to six months and consume up to 5000 bloodsucker larvae.

Sterilization could be the ultimate mosquito control. Before the 1960's, screw worms were a serious cattle pest. But by sterilizing male screw worm flies with radiation and releasing them, screw worms were essentially eliminated in a few years. Could we do that with mosquitoes?

In a field trial in 2019 in South Miami, the Kentucky-based Mosquito Mate Lab pest control company released 6.8 million male Aedes aegypti mosquitoes infected with Wolbachia, which made them sterile. The wild mosquito population dropped 75%. For now, before spending more funds on it, Florida is waiting for research results "in other parts of the country and Brazil." Meanwhile, the butterfly massacres continue; they seem to have ample funding for that.

For the preservation of our ecosystem, the widespread spraying of pesticides, especially from aircraft, must be stopped.