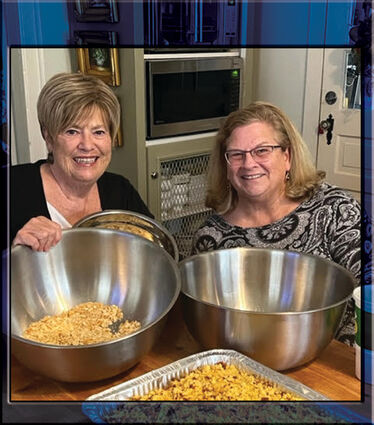 I was scanning through some of my past articles searching for topics that I had mentioned in the past. The most obvious topic appears in the articles in the last two months of the year. What I had called the FOOD Months. The topic was Guests and Food. The time when your house has the most guests, friends and family. And the time when the largest meals are usually prepared and served.

I have had a lot of pushback about trying new dishes and alternative cooking methods for Thanksgiving. This is one of the holidays where the meal menu is set in stone. "This is the way we always served it, and nobody will eat it if it is not the way "Aunt Hettie" fixed it."

The one side dish that I always try to change is the sweet potatoes. I am not fond of canned or over-cooked sweet potatoes drowning in butter and brown sugar and with crispy browned marshmallows floating on top of the liquid sea of syrup and then with pecans that are so water logged, they sink to the bottom of the dish and have lost their natural crunch.

My contribution to an alternative side dish for Thanksgiving has some brown sugar, but no marshmallows, no pecans and no sea of sugar syrup. I found many recipes for different ways to roast sweet potatoes. I seem to be getting more popular to not raise your blood sugar when you eat sweet potatoes and to add some zip to the dish.

I have mentioned in previous articles of prepping a meal with the intention of using the leftovers as a base for another meal. I just finished eating what I think was my greatest repurposing of a meal so far. It started with making Chicken Pozole, a traditional soup from Mexico, and ended as a flavorful chicken potpie. Thickening the leftover soup and adding peas and carrots made the base for the potpie. In addition, I checked how much chicken was still in the soup and added more. The hominy in the soup substituted for the potato in the chicken potpie. I lined the bottom, and sides of a casserole dish with pie shell pastry. You can use either, store bought or homemade. Added the filling and topped with more piecrust. The only changes I would make for later potpies would be to par bake the shell and top the casserole dish with puff pastry. I still have leftover soup frozen in Mason jars to make individual potpies in the future.

You know how to distinguish difference between a Southerner and a Northerner? Southerners have dressing with their turkey, Northerners have stuffing. Southerners also have a recipe for their dressing that has been handed down from generation to generation. And to keep up the tradition I am posting our family's recipe for our dressing, handed down for at least 5 generations. This weekend was the "make the dressing for the family's day at our house." Besides just making the dressing for our family my wife, Anne, has two friends joining her to make enough dressing for their families.

(notes about the recipe are from Anne learning from her grandmother.)

My notes from watching her cook!

1. Make cornbread – I use buttermilk and lots of bacon grease (You can also use saved and frozen cornbread from other meals.) Crumble cornbread in a large bowl.

2. Cut 6 stalks of celery and 3 medium onions salt and pepper to taste, cover amply with chicken broth; cook until tender; set aside. The other thing I do is I cook the onions and celery in chicken broth and butter rather than water and adding melted butter later.)

3. Add to crumbled cornbread: 8 slices of toasted or dry bread, 1 sleeve of Ritz crackers, 8-10 biscuits or dinner rolls and 1 sleeve saltine crackers. Crumble and mix together.

1 can cream of celery soup

1 can chicken broth (I use the boxes.)

add by the spoonful, including the broth, celery and onion to taste

salt and pepper to taste

onion powder and celery salt to taste...you might not need this

poultry seasoning if needed to taste

(You will need more broth than this... You mix all of this with a big spoon or your hands until all of the crumbles of the breads are broken up...it's the feel and texture of a thick cornbread mixture with onions and celery. You do not want to be able to see parts of a piece of bread or a biscuit. I use a hand mixer to mix everything completely.

I also add about a half a stick of melted butter.)

TASTE...even though it has raw eggs in it! I would be dead by now if it were dangerous! You want to check the salt pepper and sage flavors. Some broths are very salty and I don't like a lot of sage.

Bake in a greased baking pan at 350 degrees for 45 minutes – check often to be sure it does not burn.

I keep a baggie in the freezer and save those extra pieces of bread at the end of a loaf and the slice of cornbread that might be left over or biscuits so when it is time to make dressing..I have the breads ready. Originally dressing was a way to use all the stale breads. This is also a good time to use all of those frozen baggies of left over broth or the broth you put in ice cube trays over the year! Grandmother Fuller used to keep a large mason jar in the freezer and she would add to it when she had any left over broth. This recipe is exactly like my Grandmother Fuller's except she loved sage (and I think she used too much)

I make dressing on Veterans Day since I am usually off from work. It "freezes beautifully"! On Thanksgiving morning, I defrost and bake.

Grandmother Fuller also taught me to keep a jar of left over vegetables in the freezer. When you are cleaning up after a meal and you have a spoonful of beans or corn or whatever, just add it to the jar rather than throwing it away. When the jar is full, it is time to make vegetable soup!

Some of the left overs can be used to make Anne's Gravy. It has become a hand me down that goes well with the dressing.

1 can cream of chicken soup

1 can cream of celery soup

1 can chicken broth or more to make the gravy as thin or thick as you like.you can also use the broth from the turkey

2 or 3 boiled eggs diced – this will thicken the gravy some.

cooked onions and celery to taste

chopped liver from the turkey or small pieces of dark turkey

While in the kitchen trying to prepare dinner, have lots of dip to keep everyone busy and if you put it in the living room it will keep too many people from crowding the kitchen. 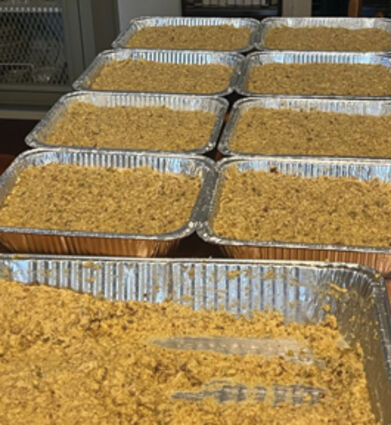