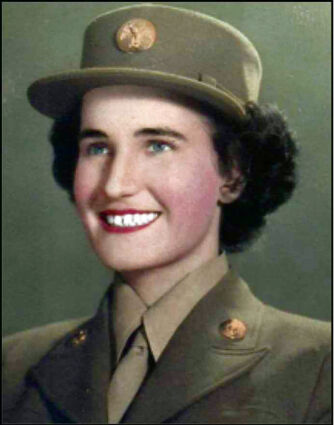 Helen Lattal is a veteran of the Women's Army Corps (WAC) having served with 8th Air Force Headquarters at High Wycombe, England. Her three years of service were 1942-1945. Not only was she active in the Selma, AL, community for many years, she also served three terms as the Commander of American Legion Post 20. She is well known in the veteran community and is a very passionate patriot. A special article about Helen was published by the Selma Times-Journal on Wednesday, January 14, 2004.

Women's Army Auxiliary Corps at age 22. After WWII was over, she was

Having learned the secretarial skills of bookkeeping, verbatim shorthand and typing at Moody's Secretarial School in Connecticut where she won ribbons for her speed and accuracy in typing and taking shorthand, she was well prepared to handle such work. Helen worked for the draft board in Connecticut, and after Pearl Harbor, many volunteers came to the office where she interviewed them. In May,1942, the Women's Army Auxiliary Corps (WAAC) were started. Helen volunteered to serve because of the Japanese attack on Pearl Harbor. She went to Ft. Devens, MA, to be assigned secretarial duties. She reported for active duty January 9, 1943, at Ft. Des Moines, Iowa, followed by basic training. She attended the Army Administrative School at Natchitoches, TX. Helen reported to Camp Shanks, New York, a staging area for overseas duty. She trained in water survival there because ships were being torpedoed. The Red Cross had coffee and donuts for the military as they boarded the ship for Europe.

On July 4, 1943, Helen sailed to ports at Ireland, Scotland and England to the 8th Air Force Headquarters at High Wycombe, England, commanded by General James Doolittle; Congress approved women going into the regular Army in July 1, 1943, and Helen became member of the Women's Army Corps (WAC). Helen worked in the areas of personnel and maintenance and served as the private secretary for Col. Elliot Roosevelt, the commander of the 8th Air Force Reconnaissance Wing. She also had temporary duty with General James Hill in the Army at Cheddington, England. In addition, she served as a courier. Living in quonset huts, she was issued a bicycle to get to work. Not only was she grateful for the opportunity, but also, she enjoyed going to the Service Clubs operated by the Red Cross in England. German bombers flew over High Wycombe where she lived and worked.

When the WWII was over, she flew to Paris, where in October, 1945, Helen served at Orly, France, and Berlin and Frankfurt, Germany. She worked on pretrial investigations prior to the Nuremberg Trials. After being discharged, she returned to Connecticut and worked with servicemen at the Veterans' Service Center for two years. For three years, she was married to Col. Gerald E. Whaley whom she met at a conference at England where she was taking notes, and he was an attendee. They had one son, Paul Whaley, II, and one grandson. During the marriage, she came to live at Craig AFB. She refreshed her secretarial skills and worked at Selma as an office manager. Helen then worked at Craig Air Force Base until it closed. She was selected to be the Seminar Coordinator at the Air War College at Maxwell Air Force Base where she worked until retirement in 1980. Her second husband, Judge Hugh Mallory, passed away after nine years.

Helen married Col. Anton (Tony) Lattal and they were married 16.5 years. The couple volunteered with the Black Belt American Red Cross. He worked in the pharmacy, and she worked in obstetrics at the Maxwell AFB hospital. She made calls overseas to military husbands providing notification of the birth of their babies. After a flood in Selma, she volunteered at a shelter for the American Red Cross (ARC) there. During 1982-1993, she served as a historian for the ARC at Selma retiring at age 82, and she was named the American Red Cross Volunteer of the Year. 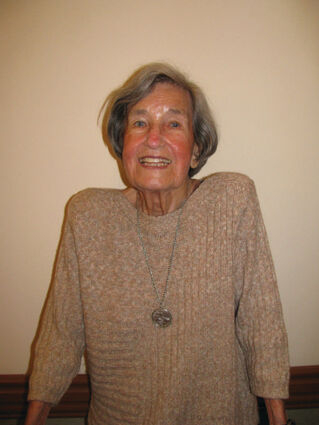 One of the most memorable war experience was typing the awards for Clark Gable and Jimmy Stewart who served during WWII. Reflecting upon her WWII experiences, Helen said, "We took everything in stride. I was so proud to serve. If Queen Elizabeth could drive an ambulance, I could serve. My family was very patriotic. I had top secret clearance at the rank of corporal. I was grateful that I could do the job of shorthand for which I was trained. I think it is great that women have come so far in the military. We were called the Trail Blazers. Women already had skills and were qualified for the jobs. I feel proud that I served. Our country was very good to the veterans after WWII. We could get our job back because that was the law. I think that it is great that women can do the jobs if they are capable."