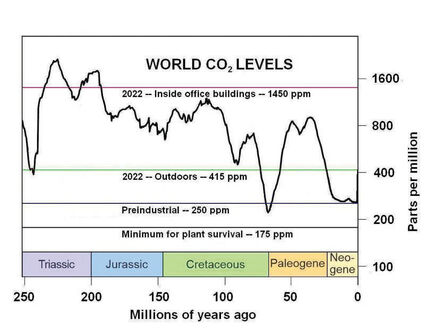 For the past several decades, the news media and others have reported dire warnings about what we must do to protect the world we live in. Today, the big claimed bugaboo is “climate change.” Politicians worldwide claim that our consumption of fossil fuels (petroleum and coal) is destroying our planet with “greenhouse gases.” Their proposed “solution” is to force all of us to switch to “sustainable” sources of energy and implement a “carbon tax” to enforce it.

Climate change is real. That’s nature. It will continue to change just like it has done for the past 4.5 billion years. We routinely go through solar maximums and minimums, variations in the Earth’s tilt, and volcanic eruptions that occasionally do serious disruptions. Studies of ice cores from Greenland and Antarctica have proven it.

Over time, we will suffer catastrophic global warming. As our sun consumes its hydrogen and burns more helium, it slowly gets hotter and hotter. In about a billion years, the Earth will become uninhabitable. The sun will slowly continue heating through another four billion years until it expands into a red giant and swallows the inner planets. That is the normal evolution of a star, and there is nothing any human can do to stop it.

Carbon dioxide is a hot issue. During the last 200 years, CO2 levels have risen from about 250 parts per million to about 415. That is a sizable increase, and doomsayers are panicking about it being a “greenhouse gas.” But they fail to understand that over most of the Earth’s history, CO2 levels were MUCH HIGHER. Fossil records prove that both plants and animals flourished with it. We have also experimented with CO2 enriched greenhouses and have proven its enhancement of plant growth.

Increased CO2 enables plants to grow more vigorously, and it also increases their drought resistance. Parts of the Sahara Desert are beginning to re-green because of it. Another fact few people understand is that plants cannot live and produce oxygen if our CO2 drops much below 175 ppm. They could literally die, and our oxygen would soon drop to a fatal level. Our pre-industrial levels of 250 ppm in the 1700’s were only slightly higher.

How much CO2 would it take to become hazardous? The levels in office buildings routinely reach 1450 ppm with no ill effects. Get over it. CO2 is not a threat.

So what is a threat? While government regulators are crying “wolf” about CO2 and climate change, they are essentially approving the massive and widespread spraying of insecticides that are wiping out our beneficial insects. Whatever the reasons, they are pursuing the non-threats with draconian intensity and punitive actions while letting the real threats go unabated.

In 1970, President Richard Nixon signed an executive order to create the Environmental Protection Agency, with an intended purpose of providing technical assistance and setting goals and standards. Before the year’s end, new acts and amendments from Congress followed, including regulatory authority and an expansion of the Clean Air Act.

In its earlier years, the EPA actually performed useful work to mitigate toxic waste, pesticides, noxious chemicals and particulates. It discontinued lead compounds in fuels and paints. It worked to remove raw sewage, oil spills, and other dangerous agents from our rivers and waterways. Our air and water improved significantly, and we soon reached the practical limit of effective environmental cleanups.

By 1980, the EPA had become over-funded and overstaffed. Its budget had grown to about $5.4 billion with a workforce of about 13,000 while it was running out of problems with practical solutions. It had outgrown its useful purpose. But instead of downsizing and letting free markets run the economy, it concocted abusive mandates with heavy penalties to address tiny, often unsolvable violations. The “Superfund” had also been created and was hitting the chemical and petroleum industries with a punitive excise tax that continued until 1995, and then was reauthorized during the Biden regime in 2021.

In 1981, EPA administrator Anne Gorsuch understood that the EPA was over-regulating and was too large and not cost-effective. The EPA’s regulatory powers were hamstringing America’s industry and destroying our tax base. In spite of these warnings, The EPA’s overreach did not abate. It has continued to grow until the present day.

Emissions have been reduced to their practical limits—automotive down 97% and industrial down nearly 100%. The EPA has done its job and has now become a roadblock. Scrap it and get it out of the way.

Protecting endangered plants and animals should seem simple—just quit killing them and destroying their habitats. The problem is the enforcement; much of it is not only silly and useless, but punitive and oppressive. Today’s environmental laws, like many others, target and punish innocent people (primarily the end users) much more vigorously than the criminals who actually do the damage (poachers and illegal loggers).

The Migratory Bird Treaty Act (MBTA) doesn’t just prohibit killing protected birds and destroying their habitats; it prohibits the mere possession or trading of any of their parts. ALL birds shed feathers while molting and scatter them everywhere. WHY does it have to be illegal for anyone to pick them up and collect them? WHY do agents have to waste their time and resources and our taxes to abuse, arrest, fine and incarcerate anybody for this utterly harmless pastime? And it’s not just bird feathers. WHY can’t people be allowed to salvage any endangered animal or plant parts from dead specimens (like road kills, etc.)? WHY can’t a scrimshaw artist be allowed to collect the teeth from a dead, beached sperm whale?

What about antiques? Have you heard the story of Geronimo’s War Bonnet? It had legally belonged to a family for decades. But because it was made with 48 golden eagle tail feathers (a native tradition, of course), government agents seized it and persecuted its owner.

On October 19, 1907, Geronimo gave his bonnet, along with his costume and moccasins, to two friends, Texas Ranger Jack Moore and oilman, C.W. Deming. In 1999, federal agents seized the bonnet and arrested Deming’s grandson Leighton Deming and an Atlanta art broker, charging them with violating a 61-year-old federal law prohibiting interstate trafficking in eagle feathers. The men had to shell out $50,000 each for bail, and Assistant U.S. Attorney Robert E. Goldman said they could serve up to five years in prison if convicted. Deming was even more upset by having to forfeit his family heirloom to the U.S. government.

Recently, sizable numbers of trees have been “protected” in a similar manner. If certain trees are endangered, just quit cutting them and provide protected habitats. Better yet, collect some seeds and plant some more. But brain-dead officials have a “better” idea—persecute people who have any wood from these trees, regardless of how legal it was in the past, and seize it.

On a hot August day in 2011, armed federal marshals stormed the Gibson Guitar Corporation and seized $262,000 worth of exotic wood, including ebony and rosewood allegedly illegally imported from Madagascar. They charged CEO Henry Juszkiewicz with “trafficking in illegally obtained wood” and imposed a $300,000 fine and an additional $50,000 for the National Fish and Wildlife Foundation.

Kenya is famous for its wildlife parks and their elephants. Like its neighbors, it is suffering greatly from poachers who kill the animals and sell the ivory, horns, teeth, skins, and related items on the black market.

On April 30, 2016, in Nairobi National Park, Kenyan President Uhuru Kenyatta personally lit a huge bonfire and set ablaze 105 tons of confiscated ivory to make a statement to wildlife poachers. A trade expert from CNN reported that it came from as many as 8000 elephants and had a value of $100 million. The fire also consumed 1.35 tons of rhinocerous horns worth another $80 million along with other poached items. Kenya had previously conducted three similar but smaller ivory burns since 1989, but this was the largest in history by a factor of seven.

About 450,000 to 500,000 elephants live in Africa, and poachers kill more than 30,000 every year. But destroying the ivory does absolutely nothing to save the elephants. Instead, it only makes it scarcer and more valuable, which in turn encourages more poaching.

The logical and common sense action would be to repeal the international ban on ivory trading, along with similar bans on other items. Let it be sold on the open market, and use the revenue to hire rangers and other staff to guard the parks. The guards could be issued rifles and other weapons and authorized to shoot and kill every last poacher on sight.

Botswana has about half of Africa’s elephants and opposes Kenya’s motives. It has some of the strongest policies against poaching on the continent, including a shoot-to-kill order. It works. Kenya’s lost $180 million from destroyed ivory and rhino horns could have financed enough security to dispatch its poachers once and for all.

Finally, if these policies should ever become inadequate, the African nations could make a stronger statement by hanging the poachers’ dead bodies in trees along well-traveled roadsides.

1. Noel, Paul, Is it true that climate change is causing crops (and vegetation in general) to grow faster? If yes, is this good? If CO2 levels are reduced to pre-industrial levels, will that lead to a reduced supply of food and crops, and higher food prices?, February 27, 2022.

2. Feathers and the Law.