The Southern Side of Alabama's History 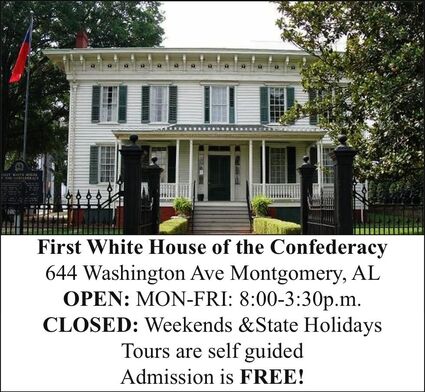 The State of Alabama is filled with interesting history. At least two schools of thought exist about the name’s origin. One contends it is derived from Alabamas or Alibamons, a tribe in the Creek Indian Confederacy. The other claims it is the combination of two Choctaw words (Alba and Amo), generally thought to mean “vegetation gatherers.” Either way, the name has American Indian roots. The mild climate, fertile soil, and abundance of water, create an indelible link to agriculture. Those living in Alabama--American Indians, Europeans, Blacks, etc., were predominantly agricultural people. Thomas Jefferson noted, “Those who labour in the earth are the chosen people of God, if ever he had a chosen people…” Being principally agrarian, Alabama (and the South in general) operated most efficiently under a free market system, whereas, more industrialized areas often favored protectionism (protection from competition). This argument reached its tipping point in 1861.

After the South was denied Independence, Confederate General Patrick R. Cleburne accurately predicted the winner’s false portrayal of Southern Patriots: “Surrender means that the history of this heroic struggle will be written by the enemy; that our youth will be trained by Northern school teachers; will learn from Northern school books their version of the War; will be impressed by all the influences of history and education to regard our gallant dead as traitors, and our maimed veterans as fit subjects for derision.” Brown University President Francis Wayland said the South should be “the new missionary ground for the national schoolteacher.” President Hill of Harvard claimed the North was tasked with “spreading knowledge and culture over the regions that sat in darkness.” Of course, they meant the South, where “English America” began and the region heavily involved with writing the Declaration of Independence, the Articles of Confederation and the U.S. Constitution. Yet, somehow, these self-righteous Northern “educators” tried to portray the South as backward hicks living in a wasteland. Perhaps this type of arrogance is the source of the designation, “educated idiots.”

To cloak the unconstitutional invasion of sovereign States and their post-war theft of money and property, the “Yankees” sought to manipulate the narrative. Controlling education was crucial as a means of indoctrinating future generations. In this manner, descendants of Confederate Veterans could be conditioned to view independence as folly. Since memories fade and individuals who fought for self-government passed on--those dictating the narrative could more readily demonize Southern Patriots. Indeed, the centralization of power, education, and “allowable” information described by Huxley, Orwell, and others is a near fait accompli. One has to wonder if there are any limits to this sinister and fake agenda that encourages people to loathe themselves and their ancestors.

Sitting near the Alabama State Capitol, on Washington Avenue in Montgomery, is the building now known as The First White House of the Confederacy. This 1834 “Italianized” home was built by and served as a primary residence for William Sayre, councilman, mayor, and railroad advocate. Prior to 1861, multiple individuals in banking, ironworks, cotton brokerage, etc., occupied the building as they worked to promote the modernization of Montgomery.

From February through late May of 1861, the house served as the executive residency of President Jefferson Davis and his family. This was during the brief time that Montgomery was the capitol of the Confederate States of America before being moved to Richmond, Virginia. The house contains many artifacts pertaining to Davis’ residency. The two-story house is immaculately maintained and the guides are well versed in not only the history of Davis and his family but also the social and economic conditions before and after the War for Southern Independence. So, visit the First White House of the Confederacy and find out about a multitude of topics, including the Southern philosophies regarding agrarianism, limited government, Christianity, Jim Limber, and a plethora of other subjects. [The Curator is especially knowledgeable about all of these subjects.]

Alabama is filled with places dedicated to the Confederate States, the War of 1812, the American Revolution, Southeastern Indian tribes, and numerous other events and individuals linked to the State’s history. Ignore the “infant-bleating” drivel from leftist, “pseudo-journalist” hacks and “Soros-driven” organizations and their anti-Southern and anti-Christian agenda, and visit these places to gain a better understanding of history, i.e., educate yourself. These snapshots in time represent money well spent in a government system notorious for funding vacuous and useless projects. During the Christmas Holidays, I would like to encourage everyone to visit The First White House of the Confederacy, Confederate Memorial Park, Joe Wheeler House, John W. Inzer Museum, Tannehill, and other places throughout Alabama to learn more about the Southern side of history—much has survived despite the intentional efforts to destroy it!

Sources: The First White House of the Confederacy--Montgomery, Alabama, at: https://www.thefirstwhitehouse.com/; Visiting Montgomery, at: https://visitingmontgomery.com/play/first-white-house-of-the-confederacy