You Really Can Go Back; It's Just Different

My wife, her sister and I just came back from a 10-day trip to Germany. Her niece and their family are stationed in the same place my wife and I were stationed from 1987-1993. You know, there is a saying that "you can never go back." Well actually you can, just be prepared for all the changes.

Before we left, I told my niece that I was "easy" and would do anything they had planned. I only had two real requests. First, I wanted to get into the AWACS simulator and fly. I had not flown that simulator since early 1993 and had just wanted to do it. So my niece made it happen and she and I "took to the skies" in the simulator my first day there. I got to take-off, fly an approach and do some air refueling. It was fun to get in there again. My second request was to go the Moehne Dam. That was the dam made famous by the British Dam Busters in World War II. I'll get to that later.

But as I spent my time in Germany, the Netherlands and Belgium, we went to many new places, some familiar and yet all of it seemed so different. The traditional German homes are being replaced by many of these tiny square houses barely the size of a four car garage, windmills are absolutely everywhere, the people really didn't seem to be quite as friendly as two decades ago, the NATO base seemed to be a lot less well-maintained as I remember and our BX over in the Netherlands, Schinnen, is just a ghost of what it once was. Back in the day before internet, satellite TV and GPS, Schinnen was really one of the main focal points for American activity. The other day, besides my niece, my sister-in-law and myself, there were only five people shopping. In the day, there were at least a hundred at any given time.

One day we were going to Cologne on the train from Aachen when the train stopped in Duren. The conductor made a long announcement ending with "Auf Wiedersehen." Then the train's engine turned off. We looked at each other for several minutes then my niece and I went forward to talk to the conductor. He just told us we had to get off, walk in a certain direction, get on a bus, get off the bus at another station and then head on to Cologne. We decided to just stay put and head back to Aachen and spend the afternoon there. But at least we got to see a group of Neo-Nazis marching and handing out leaflets to people. In the day, I am certain the conductor would have been much more helpful and told us due to maintenance the train had to stop in Duren. But alas, times do change. Even standing in front of our old house where we lived for six years had a certain sadness to it. It didn't help that the owners had told us that our landlords had all recently died. I still miss living in Germany and much of the simplicity, but racing forward into my conscious thought this time is the fact that for all the fun we had in Geilenkirchen, although the location was the perfect backdrop, it was the fine people we knew and worked with that made that assignment what it was. Flying the simulator drove that reality home and the reality that I am quite content and happy to be where I am today.

On the night of 16-17 May, 1943, 19 British Lancaster Bombers of No. 617 Squadron, No. 5 Group, took-off to bomb four key dams in the German Ruhr valley: the Moehne, Eder, Sorpe and Schwelme. As a brilliant center of gravity analysis, the British concluded that in order to effect German industry in the Ruhr area, instead of targeting individual factories, if they simply denied water to many of these factories, production would have to be reduced. Likewise, since dams were responsible for a large portion of this water, if they were able to destroy several key dams, then large amounts of collateral damage by way of flooding, would most certainly occur.

In concept, the plan was brilliant. Bomb engineer Barnes Wallis developed a bouncing bomb that would skip along the water, over the anti-torpedo nets, strike the dam and explode. The unique aspect was that the bomb, looking like a large oil drum, would be spun backwards at exactly 500 rpm underneath the bomber and then released. Once it struck the dam, it would spin downwards along the face of the dam until it reached 30 feet when a hydrostatic fuse would ignite the bomb. The force and concussion of the bomb coupled with the pressure of the water would breach the dam. The drawing illustrates this.

In order to hit the dam precisely, several obstacles had to be overcome. First the bomb had to be dropped at precisely 60 feet above the water. How does one judge 60 feet at night? The Brits placed two converging spotlights on the bottom of the plane and when they touched, 60 feet. While the pilot had to fly precisely 220 mph, the bomb had to be dropped 425 yards +/- 25 yards from the dam. Again, how does one judge 425 yards? Easy. Knowing the exact dimensions of the dam, they used the two towers as fixed points. Knowing the distance between them and using simple geometry they could figure the exact distance. They gave the bomb aimer a simple wooden tool with two fixed arms, set at a specific angle and upon the two arms were two wooden dowels. Looking through an aimpoint on the tool, when the dowels touched the two towers in front of them, ta-dah, 425 yards. Oh by the way, the Germans were shooting at them.

As the raid against the Moehne unfolded, the young 24 year-old Wing Commander Guy Gibson attacked first. His bomb hit but had no discernable effect. The next plane's bomb bounced over the dam and destroyed a power station on the other side. Plane three missed but planes four and five hit and breached the dam. The overall strategic success of the raid is for another day but as for me, to walk along the dam and stand at the exact spot where Gibson's bomb and the bombs of planes four and five hit was humbling.

The breach caused by the bombs was 250 feet wide by 292 feet deep. 11factories and 92 homes were destroyed while another 114 factories and 971 homes were damaged. Roughly 1,600 people died, many of those forced laborers. While damage was significant, the Germans were able to get the dam back in operation by late September 1943.

This trip to the Moehne Dam was the capstone to my German visit. I hope you enjoy some of the pictures. 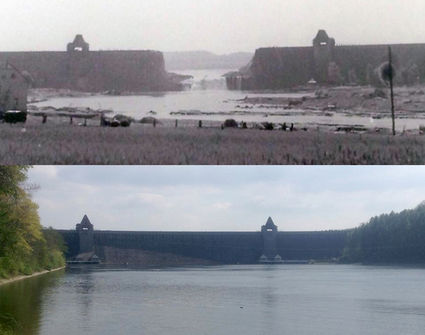