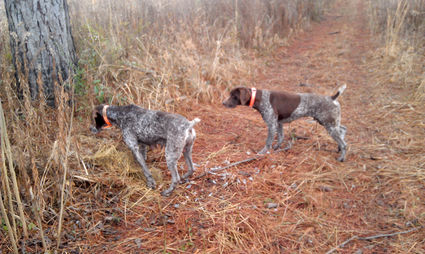 Hello everyone, my name is Steve Long, and I'm a life-long outdoorsman with a soft spot for turkey hunting! I enjoy just about every kind of hunting and fishing there is, especially with my four boys. I've even managed to get my wife of 29 years, Renee, to go along once or twice! They say do what you love, and that's exactly where I'm at. I own a couple of small businesses in Montgomery, I do guided hunts at Great Southern Outdoors, and I even co-host a hunting and fishing radio show, Cast & Blast Outdoors, with my partner Rob Newman! I also write every other week for the Montgomery Advertiser.

But enough about me!

In this article, I'd like to talk about competitive bird shoots; namely, quail and pheasant shoots. GSO hosts a quail hunting tournament as well as a continental pheasant shoot. First, we'll go over the quail tournament!

Quail season for some preservations, like GSO, runs from October 1st till March 1st, while the regular season runs from November 14th to February 28th.

Watching experienced dogs and guides work a field, flushing the quail, and taking a shot at them is an awesome hunting experience you can't get any other way. Being the social sport it is, quail hunting is very relaxed, with a great sense of comradery and fellowship. The tournament is no different!

Teams of four show up on Thursday, and take some shots at shooting clays to warm up that afternoon. Friday, the show begins. The five teams will each make their way to their own field, and for about three and a half hours, they go for as many quail as they can harvest. After a good lunch break, they head back out to the fields, rotating to the next field, making sure every team gets a fair shot at each field. With two rounds a day, the third day is when the tournament ends, with all the teams harvested birds being tallied, cleaned, and set up to be shipped home. Hey, quail makes for some good eating! The winners are announced that evening at a banquet, receiving any number of prizes, like ammo, gear, or even a new over-and-under shotgun! Of course, bragging rights still trump everything else!

If quail is a bit too slow-paced for your liking, you might be interested in a continental pheasant shoot! Unlike any other type of bird hunting, you're guaranteed to have shots at birds in this event. While pheasant isn't a native bird to Alabama, Derrick Deese of Deese farms stocks the birds for GSO, allowing the shoot to happen. That being said, it's not entirely out of the norm, as pheasants are pen-raised out west as well.

With a pre-set number of hunters, everyone takes a spot at a station, at the base of a hill. Atop the hill is a tower, from which the pheasants, 10 at a time, are released. After each round of 10, the shooters rotate to the next station. All in all, there are 300 pheasants released. One of those pheasants will be banded though, and named the Royal Rooster. A shooter who's lucky enough to get that wins big! Before the shoot, each shooter puts $20 in a pot. The one who harvests the Royal Rooster wins the pot, so there's some added incentive to make every shot count. With all the action, it's pretty normal for a shooter to go through four to six boxes of shells for the event.

After the shooting's done, everyone heads to the lodge for a good meal and some bragging. The staff cleans and prepares the birds, splitting up all of the meat for everyone, so nobody goes home empty-handed.

Both of these events are very social, and show a sort of tradition that runs through a lot of the hunting we do in the state of Alabama. It's got a lot to do with bonding and making friendships that last a lifetime, while enjoying a sport that's been around for longer than we have, and will continue to be there for the generations that come after. I've lived my life hunting and fishing, and I've passed that on to my boys, who will one day hopefully pass it on to their kids. It's a passion that we can all share, no matter our background.

So from my family to yours, get out there and enjoy the Outdoors!