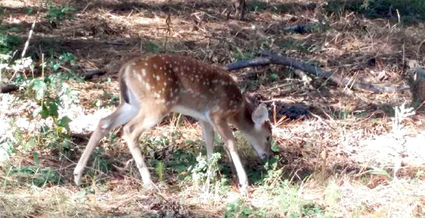 Well folks, it's finally November, which is when gun season for deer hunting kicks off! With both Northern and Southern zones starting on the 22nd of November, all of us are dusting off those orange caps and vests, sighting in the old rifle, and scouting around for the best spot to bring home a buck. You've got muzzleloader season starting on the 17th, and youth seasons starts on the 14th! In the Southern Zone, there's also a period from December 1st through 10th where gun hunting is out, and archery is king again! But don't worry, because from February 1st through 10th, we've got an extended gun season in the Southern Zone!

Despite all the kinds of hunting we have down here in Alabama, deer hunting is still easily the most well-known type of hunting we do. In fact, you could say we've raised it to a science. A very well-thought out, researched, and applied science!

Any seasoned veteran of the woods knows how the laws regarding harvest limits, season open and close dates, and many other things have changed as the years have gone by. Doe tags, doe days, and other measures taken to help manage Alabama's deer population have all been implemented, and the changes this year are no different in their aim. This year, you can harvest one buck a day and one doe a day. You can harvest a total of three bucks a season, with at least one (if you bag all three!) having four antler points of 1 inch or greater, except in Barbour county.

So, you've got your license, your harvest record, your rifle's sighted in, you got your ammo, your orange vest or hat, and all the other necessities of deer hunting! All of that preparation's good, but you've still got a few other things to consider! Are you going to hunt in a blind on the ground, a box stand or ladder stand above the ground, or maybe stalk a buck or doe? Will you hunt on a food plot, or in a bottom, or maybe along a power line?

Any guy or gal that's serious about bagging a buck knows this year's got a great deal of potential! I've seen more than my fair share of deer this year, in the fields and in the wooded bottoms. Summer's left most of us out of the deer's habitat, so with little pressure, the deer aren't spooked out of the better hunting spots. Pressure's a big deal, so keep it in mind while choosing where you're gonna set up! On top of all of that, this is setting up to be a great year for the acorn crop from the hardwoods, so if you've got a ladder stand in a pretty little hardwood bottom, you can bet on some action there!

So, you're ready to set your spot, but not so fast! There's a few other things to consider! This time of year, the wind typically blows from the North-West, to the South-East, but may be a little different on the exact location. You always want to do your best to have the wind blowing in your face, carrying your scent away from any deer that might wander in front of you. The eyes, ears, and especially the nose of a deer are all fine tools for detecting predators, and we're definitely included in that list!

With recent changes, you can also use feed, like corn, but there are a couple of rules for that too. It can't be in sight, behind either natural vegetation or natural contours of the land, and must be at least 100 yards away. This is considered okay for supplemental feeding, but baiting is still out of the question!

I've only touched on some of the more basic things related to deer hunting, and it'd take a book or two to go over it all, but the best teacher is experience! So get out there, and bag you a biggin'!