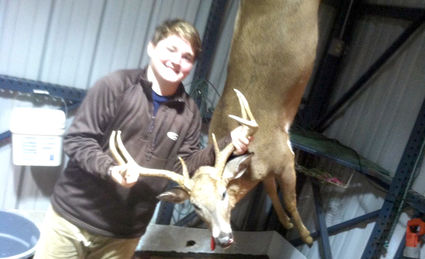 I was recently reading an article in the advertiser one morning and came upon some very interesting information that shows that we Alabamians are very giving. The article stated that Alabamians donate a larger slice of their income than those in almost any other state and the typical Alabama donation is bigger. Alabama ranks number 3 in highest percentage of donated income the study found. Only Mississippi and Utah ranked ahead of us.

The National Financial Advisory site WalletHub.com also ranked Alabama as the second poorest state. Talk about having a heart, we have the least and give the most, maybe the rest of the nation needs to take a look and follow our example.

Now I know that y'all are reading this and going what does this have to do with hunting and fishing? Well I'm going to tell you, deer hunting has become a way for many schools and charitable organizations to give back to their community or organization. One such organization that has taken deer hunting on as a way to raise funds is the Montgomery Lions Club.

The deer hunt this season will be hosted by the Montgomery Lions on January 15th-17th, 2015. You can come join hunters from all over the United States and Canada and hunt over fifty thousand acres of private land during the prime rut in the famous Alabama Black Belt, home of the Souths finest trophy whitetail deer. The Black Belt of Alabama is considered one of the best if not the best locations in the country to hunt the elusive whitetail deer.

The hunt registration begins on Thursday morning the 15th at 9:00 a.m. Hunting will begin Thursday afternoon and go through Saturday morning the 17th. During the hunts you will be hunting private land and personally guided and don't forget you will also be treated to great southern food and of course southern hospitality. On Friday night there will be a banquet and raffle packed with firearms and outdoor gear available for the lucky winners.

Now lets talk pricing, your not going to believe this, the standard hunt package which is 3 days, 4 hunts (one buck and two does) is only $900. They also have a father/child package (17 and under)-$1200 (both hunting-2 bucks and 4 does). If you want Mama to tag along she is only $50 a day and can shop and explore while you and junior hunt.

I know there is a lot of land owners out there who are particular about hunting on their land, but if you would like to be a part of a great organization that is raising money for a good cause the Lions Club is looking for additional property to hunt. This hunt has been so good in years past that the demand is growing every year so additional land is greatly needed. if you have land and possibly interested in donating for the hunt call the Lions Club office at (334)356-1180.

The Montgomery Lions Club has generously turned over $4 million dollars to charities over the years and will continue to keep working and raising funds with great events such as the Lions Club Charity Deer Hunt. My hats off to you guys and gals for all the hard work and time that y'all give to help others in need.