Turkeys Are Feeling The Pressure of Season 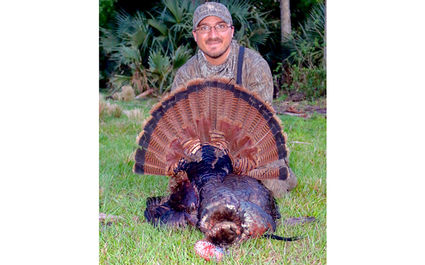 Turkey season has kicked off now in Alabama, and even though I haven't held a gun yet this season, I've seen plenty of action while helping hunters and huntresses chase after those elusive birds. Now, while some folks have started the season with a big bang, knocking down turkeys well before the morning's really started, there are also folks out there who just can't quite get the rascals to fly down from the roost in the right direction. Some of these birds have been talkative, and sometimes they won't so much as make a peep. I've personally taken some of these same determined hunters out into the field, and it never gets old, even if I'm not the one doing the shooting. If you haven't had the chance to chase those Thunder Chickens yet, don't worry. As a matter of fact, it seems that pressure has more of an effect on these birds than we may have realized!

Recently, I happened upon an article from Westervelt, detailing the findings of a study conducted in Louisiana, where 12 gobblers were outfitted with GPS-tracking transmitters, and hunters in the same area carried a similar device with them when they hunted. The goal of the study was to see just how strongly turkeys reacted to pressure from hunters, and the results were fairly interesting. Turkeys generally act as individuals, not as a group, in that each bird followed its own routine, with the turkey's on personal experience seeming to dictate the bird's movement the most. If the bird had been pressured in previous days, it would have no problem heading to an area that was far less pressured. More importantly, birds that were more experienced at surviving the season were more likely to continue to learn and, eventually, maybe even become unhuntable.

There are plenty of other conclusions to draw from that study, but the one that struck me the most was how the birds were far more aware of our movements as hunters than I originally thought. Hunting down here for as long as I have, I know they're practically ghosts, but to think that it's more than just instinct that they use to skirt around us is pretty darn interesting!

Of course, all this talk of birds just makes me want to get out there and hunt them even harder. So stay determined, folks! If you haven't had very good luck, try changing your routine a little bit. Maybe try an area that you and other hunters haven't pressed hard yet. With determination, you'll definitely do better than people who never leave the couch!

As for me, I'll keep on doing what I do; guiding and assisting other folks, and occasionally sneak out and get myself some time to hunt these birds. I'm still pushing hard on the QDMA front, and I still want you guys to take a little time and check us out at www.qdma.com<</i>/strong>.

Good luck, guys and gals, and don't get too frustrated. These birds may seem silly, but they have no problem making us look like fools. So get out there, show those bids who's boss, and go get'em!