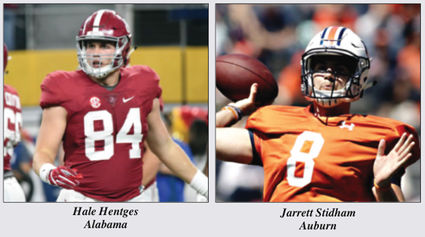 Football in the Southeastern Conference is not just a game, it is a right of passage from one generation to another. Inter-marriages are not recommended. This writer has been to many stadiums over the years. The crowds at Ohio State and Notre Dame were almost as fanatical as a game in Bryant-Denny Stadium or in Jordan-Hare Stadium. The SEC is really where the action is. The following is a brief sketch of the players that must excel in order for their teams to make it to the SEC Championship.

EAST: Coach Jim McElwain of Florida has won the Eastern Division Championship his first two seasons. Very impressive. The one time Alabama offensive coordinator is 19-8 at Florida. My opinion is that he has been fortunate to have come along at a time when Tennessee and Georgia have had consistency problems. His biggest victory, to me, was last year in Tiger Stadium when his defense held LSU several times with goal line stands to beat a superior football team. Recently the Board of Regents raised his base salary to 4.5 million and other financial perks. Florida is a great place to recruit to. However, something in the back of my mind tells me that in the end, McElwain will not earn that vote of confidence. We will see. Florida is blessed with much more depth than in the last two years. Quarterbacks Feleipe Franks (RSF) and Luke Del Rio (6-1, 215 lbs, Jr.) must improve the production from that position in order to repeat their dominance in the East. But, in my opinion the key to victory for Florida in 2017 will be the play of Antonio Callaway (WR, 5-11, 200 lbs, Jr.) He caught 54 passes for 721 yards last year. He is good enough to make defenses roll up to his side, thereby opening spaces for the other receivers. He is on his way to becoming the top receiver in the history of Florida football. Watch for Antonio Callaway.

GEORGIA: Mark Richt wins 10 games in 2015 and gets fired. Kirby Smart wins 8 games in 2016 and gets a raise. Was Coach Smart building for the future or just not as good as Coach Richt? Progress needs to showup in 2017. Smart played a good number of young players including starting, and staying with, freshman quarterback Jacob Eason. They could unseat Florida in the East. But, Jacob Eason (6-5, 235 lbs.) will have to play much better. The key to victory for Georgia will be the health of Nick Chubb (RB, 5-10, 230 lbs. Sr.) who is already in second place in rushing with 3,424 yards during an injury plagued career. Those injuries will keep Herchel Walker's record safe for now (5,259 yards). Watch out for Nick Chubb.

TENNESSEE: Fifth year Coach Butch Jones is getting heat in Knoxville, even after two 9-4 seasons in 2015 and 2016. Consistency has been Coach Jones's main problem. He starts every year with high expectations and those expectations are never met. He has recruited well and will have another good team in 2017. Will it be good enough? That is the question. One problem for Jones this year is the fact that there is no player on the team that falls in the great catagory. One may emerge. At this time, to me, the key to victory is in the play of Jauan Jennings (WR, 6-3, 205 lbs. Jr.) He caught 40 passes last year for 580 yards. He can do better. Jennings should make it easier for rookie quarterback Jarrett Guarantano (6-4, 205 lbs. FR.) to move the football in 2017. Watch for Jauan Jennings.

WEST: This division of the SEC has been the sole property of Coach Nick Saban since 2009. Only Auburn has slowed Saban's rise to the top of the college football world. Their win over Alabama in 2010 behind Cam Newton sent Auburn to the SEC Championship game, which catapulted Coach Gene Chizik's Tigers to the National Championship win over Oregon. The last second upset of Alabama in 2013 behind Nick Marshall sent Auburn to the SEC Championship game where their win earned Auburn another chance at the National Championship. However, Florida State scored with :13 seconds on the clock to send Coach Gus Malzahn home without a trophy. Since Saban's arrival in Tuscaloosa the championships have been dominated by Alabama, Auburn and Florida, mostly Alabama.

ALABAMA: The sting is not gone from the last second touchdown that cost the Tide a second straight National Championship last year. Clemson just had a little more in the tank on their winning drive. This is uncharacteristic of a Saban coached Alabama team. You can be assured some change has been made in the training regiment in Tuscaloosa. Back to back 14-1 seasons can only be disappointing at Alabama. They believe that the National Championship play-off system was started for their benefit. Again, no team in America is as well stocked with players at every position as is the Crimson Tide. My observation is that only one position is vulnerable. That would be the position held by the most under used talent in the Saban era, O. J. Howard. Even with a limited number of catches, defenses had to adjust to his side every down. No more. The keys to victory this year belongs to two tight ends. Hale Hentges (6-5, 250 lbs. Jr.) looks to be just a tad ahead of Miller Forristall (6-5, 240 lbs. So.) If these two players come through, Alabama will be back, in the championship business in 2017.

LSU: The Bayou Bengals are the only SEC team that comes close to Alabama's talent. Even so, they will begin the 2017 season with many questions to answer. After the ejection of long time coach, Les Miles, during the season, Athletic Director Joe Alleva named defensive coordinator Ed Orgeron as interim head coach. The energy and enthusiasm created by Coach Orgeron was reason enough for Alleva to name him the real head coach. This was not a unanimous choice of the Tiger faithful. Nevertheless a new era begins at LSU. Les Miles gone. Leonard Fournette gone. Derrius Guice not gone. He is gone if he gets pass the linebackers. Lets just say LSU will not miss Fournette. Guice (5-11, 215 lbs. Jr.) could be the best back in the South. But...the key to victory is in the hands of veteran quarterback, Danny Etling (6-1, 220 lbs, Sr.). The so, so transfer from Purdue was adequate in 2016 with a limited offensive system. Les Miles teams were good and tough, but they were predictable. Stop the tailback and you win. Orgeron brought in new offensive coordinator, Matt Canada from the University of Pittsburgh to change the offensive philosophy. Look for a more wide open game where passing is as important as running. If Etling can run the offense, LSU contends. If not, expect a good team but not a contender.

AUBURN: Coach Gus Malzahn is not the most popular coach in the history of Auburn football. He finally realized that a change was needed from his offensive philosophy - zone read, zone read, zone read pass, field goal. Daniel Carlson is the best long field goal kicker in the country. But, field goals will not beat Clemson, LSU, Georgia and Alabama. Another 8-5 season will not set well with the alumni. A change at the offensive coordinators job was necessary. So, Malzahn brought in former Auburn assistant coach Chip Lindsey from Arizona, where he was offensive coordinator. Even with the power running of the SEC rushing leader for 2016, Kamryn Pettway, returning along with other good backs, Lindsey must infuse some bells and whistles in the passing game. Only two passes were attempted to an Auburn tight end in two years. Junior quarterback Sean White, led the SEC in completion percentage ( 63.9) without the benefit of any receiver than he could really count on. White (6-0, 200 lbs. Jr.) can not take the same punishment dealt out to him for two years. He is tough, he is smart, he is accurate. The offense has not really fit his skills.

The key to victory is in the hands of a highly publicized transfer from Baylor. Jarrett Stidham (6-2, 215 lbs, So.) can throw the deep ball better than White. He is a better runner than White. He is the real dual threat that Malzahn has had success with the likes of Nick Marshal and Cam Newton. With all due respect for White, Jarrett Stidham is the key to victory in 2017.

The College Football season kicks-off in less than two months!